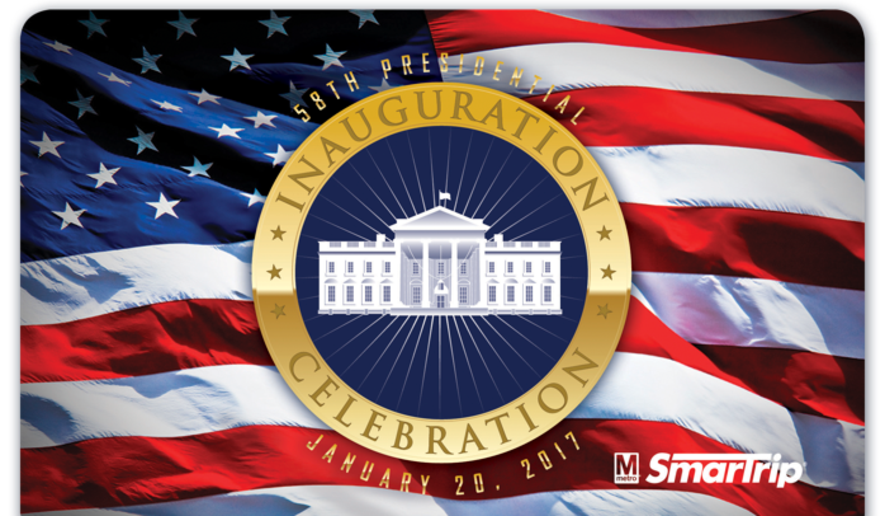 For $10 people attending Trump’s Inauguration can ride the DC metro all day. The SmarTrip card gives unlimited access to the metro system on January 20, 2017. The card looks like this:

Notice anything missing? Â No mention of the President, Donald Trump. In the past these Inaugural smart cards had a flag background with the date and a photograph of the President. This was Obama’s card in 2013: 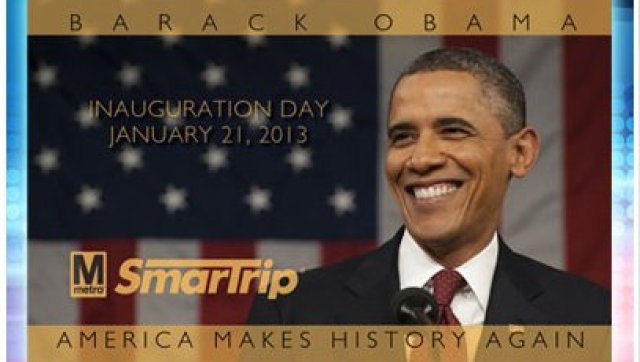 A prototype of a card was also made for a possible Romney Presidency: 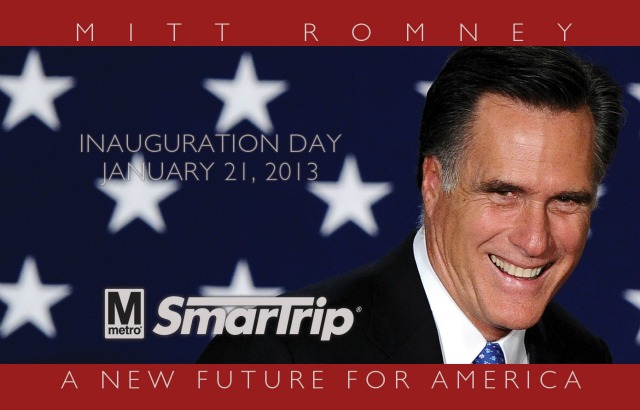 Metro claims they didn’t get a picture from the Trump campaign in time to use it on the smart cards. Â It couldn’t be because those DC folks who run Metro hate Trump? Â No, couldn’t possibly be that.

Metro riders to inaugural events had better have a back up plan for when metro employees suddenly state a fire, accident, or other breakdown on the line that Trump celebrants are mostly using.

Payback for the treatment of Obama for the last 8 years. It is what it is.

He had two years of super majorities in the House and Senate. He squandered them on Obamacare. When the political winds shifted, he decided to go it alone – no compromise. He resorted to the imperial executive orders and the stupid GOPe funded them. He owns his treatment and I can only hope that America can recover from the damage he has done.

By the way, he continues to import muslims unabated and he is aided by Christian charities in doing so. Doesn’t sound like lack of cooperation but it will certainly lead to more terrorist attacks in the USA. All of which, of course, will be blamed on Trump not being able to pull off the impossible.

And now Democrats are going to say the same about Trump, and do exactly the same to him.

I will also remind you that they were plotting against Obama before he was even sworn in. Long before Obamacare.

What goes around comes around.

We have a divided nation. My fear is that Democrat plots go far beyond mere disagreement into violence and assassination. Trump was subject to assassination attempts while on the campaign trail. Now the Democrats threaten disruption and violence at Trump’s inauguration. They have even harassed his family with their children on an airplane.

If what goes around, comes around then try getting another Democrat president inaugurated.

The Republicans will screw it up just like the Democrats did. Back and forth. Been going on since the depression.

You say “He resorted to the imperial executive orders . . .”

Number of executive orders issued by each recent two-term president:

It isn’t the number but the impact. Of course, you want to throw around numbers to hide impact because that makes you seem superior. Most intelligent people know the difference.

I just added a bumper sticker to the center of the tailgate on my F250 SuperDuty 4WD: “I’ll show your president the same respect you showed mine.” Already had one pipsqueak rightwinger challenge me — told him to “GFY.”

I didn’t know there was a difference. The President, whomever that is, is respected because of the office he holds not because of who he is.

Tell that to the GOP.

Two days after Obama’s first inauguration, a group of senior Republicans met at a DC steakhouse – McConnell, Boehner, Gingrich, etc. – they pledged to oppose every single thing Obama did or proposed no matter what it was. And they did – historic number of filibusters; historic number of unfilled judicial positions.

Then there is the mountain of comments and photos – Obama as a witch doctor; references to Ms. Obama as an ape; attacks oh his place of birth; claims that the Obama daughters were adopted from Morocco.

As I say, I’ll respect your president the same as you respected mine.

Your second and third paragraphs are whining. Now that trump has been elected, you are in full temper tantrum mode. Sorry, no participation trophy for you and if you aren’t careful we will take away your microaggression safe space. Imagine, you will actually have to face reality!

“The Bullshitting Elephant”? You mean Bullshitting Troll. The card was issued and is being sold without the sleeve. The sleeve is now being designed as an afterthought only because of complaints.

The explanation is senseless. First, the Trump team is very efficient. Second, there are trillions of Trump pictures – just pick one. Just more leftist silliness.

You say “Second, there are trillions of Trump pictures.” Ever hear of copyright?

Ever hear of public availability without copywrite. Apparently you don’t understand that most information is neither copywrited or protected as such. By the way, you should copywrite your comments so you can harass Ivanka Trump if she happens to say something that is similar to what you say.

BY THE WAY, I AM A WRITER WHO HAS COPYWRITED.

Your work is under copyright protection the moment it is created and fixed in a tangible form that it is perceptible either directly or with the aid of a machine or device.

Unless a photographer explicitly puts the photo in the public domain it is copyrighted. And tracking down copyright holders is not an easy task sometimes.

The exceptions for ‘fair use’ would certainly not apply. Why they couldn’t get one through a stock photo service I don’t know. Though perhaps it was more about needing the photo that Mr. Trump would want rather than just grabbing any photo of him. After all, there are some rather unflattering pictures that would arguably be worse than no photo at all.

You have hit upon the stock photo service and that would have been more than appropriate. As far as the picture, this is the President of the United States and the photo should be flattering of his image.

Nobody has asked a simple question – how was the Obama, Bush, Clinton, etc photos chosen pre-inauguration. It would certainly be relevant to know.

By the way, I just copywrited a story I wrote because it contained a sketch that the illustrator wished to protect. Easily done with date and the words “copywrite” followed by author and illustrator. Who knows, the story may become famous.

Thanks for the link at Daily Kos.

Probably couldn’t afford the royalty fees for a Trump photo.

At this point, Metro looks a lot like you. Petty and vindictive.