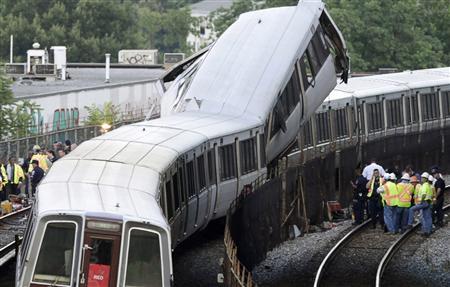 “Losing passengers and revenue, the subway system seems to lack a recovery plan.” Â So says the Washington Post in their editorial today.

Faced with a daily shortfall of tens of thousands of paying customers, Metro seems complacent, or possibly paralyzed…

Some of us saw this coming but many of our politicians did not,

The problem is that Metroâ€™s board cannot agree on a game plan, or even leadership qualifications for a new general manager, to treat what ails its rail service. One thing is not in doubt: The cost will be colossal, measured in billions of dollars.Â (emphasis mine) And it is anyoneâ€™s guess where those funds would come from in an environment where passengers, fed up with plummeting reliability, are loath to pay higher fares, and strapped regional funding partners are equally disinclined to increase their subsidies.

We all know where the money will come from, the taxpayers. Â Before Loudoun county even has one subway stop, we’ll be paying, and paying, and paying, to fix this mess that is Metro. Â Read the whole editorial and remember to thank the five members of the Board of Supervisors in Loudoun who stuck us with this ever expanding, and never ending, bill for this lemon of a subway system.

What happens when Metro riders reach their breaking point.Â

I grew up in NYC and took the subway EVERY DAY to classes at City College of New York, about ten miles from my home in lower Manhattan. I was NEVER late for class once because I can NEVER remember any appreciable train delay. Now, I take Metro everyday from Rosslyn to McLean, and there are about two delays every month. There are also fewer Silver Line trains running than a year ago and the wait for morning train can be as much as 15 to 20 minutes. This is why Washington never has been, and never will be, a world class city.

Scott York led the effort to bring Metro to Loudoun, 4 years ago republicans voted for him. Don’t make the same mistake twice, who knows what fiscal cliff he is going to lead the county off again.