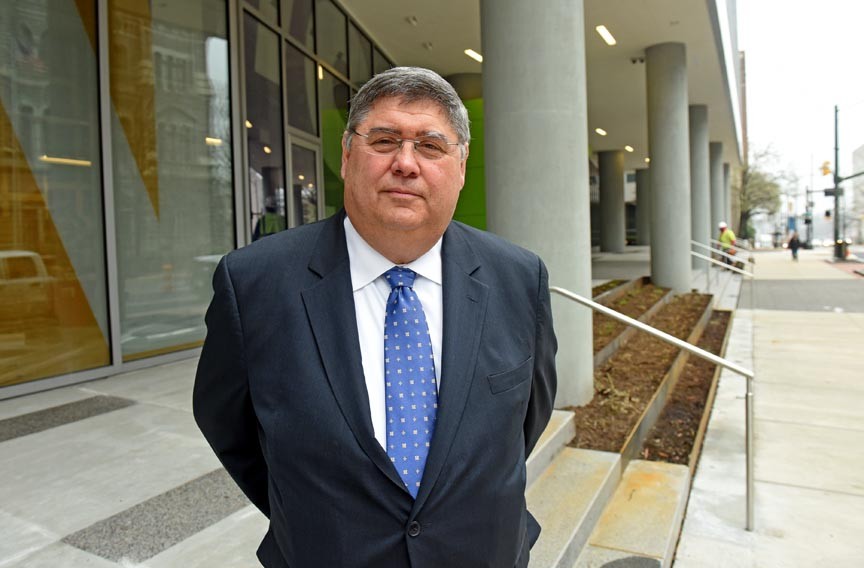 Henrico Sheriff Mike Wade is running for an open, redrawn Congressional Seat in the 4th District. Tonight, he held an event in the most unlikely of places. Mustang Sally’s Pub & Grill is a blue-collar bar in the south of Richmond. Mike Wade’s campaign staff and the Eggleston Group didn’t invite a flock of politicos to attend the event.

They weren’t looking for a bar to hold a political event in, but sought, rather, the men and women regulars of the Pub and Grill itself. Mustang Sally’s is as authentic a blue-collar pub as you’ll find in the south end of Richmond and their regulars are exactly what you’d expect – hard working Americans.

I had the opportunity to spend some time with the Sheriff before the event and was impressed by his utter disinterest in talking points or in telling me what I wanted to hear. Quickly working our way through a few areas of disagreement, we talked about the 4th district, his opponent and his concept of what it means to be a Congressman. Sheriff Wade has run a very different kind of campaign, addressing difficult issues many other candidates have triedÂ to avoid. Mike Wade and 5th District Republican candidate Tom Garrett have both gotten behind an innovative solution for college loan debt deferment, which allows graduates the choice to pay off some of their current loan debt with some of their future Social Security benefits.

What Mike Wade seems most enthusiastic about isn’t surprising for a candidate currently serving as Sheriff. Â Drug addiction, criminal justice reform, fiscal responsibility and infrastructure investments were all topics he spoke about repeatedly throughout the night. This is not because he kept bringing these subjects up, but because this is what the folks wanted to talk to him about. Some of the people there had already heard about Henrico’s innovative approach to drug rehabilitation pioneered by Wade. They wanted to know why they can’t have those same programs in Chesterfield or Richmond.

Wade’s gregarious demeanor and man-of-the-people approach to meeting his future constituents was genuinely authentic; and the folks there seemed to recognize they had an opportunity, for once, to talk to someone who could one day be in a position to help them. A small business owner complained about the government constantly interfering in his business, making it harder to eke out a profit when business owners are forced to spend so much of their time and capital complying with ever-increasing regulations. Almost everyone there was upset about Obamacare, to which Wade replied, “the Affordable Care Act isn’t affordable and it doesn’t provide health care”. Everyone understood the difference between health care and health insurance, something a few more of our politicians could stand an education on.

A gentlemen from North Carolina politely introduced himself, but took the opportunity to tell this candidate for Congress a thing or two about what working class Americans want from their representatives.Â â€œI donâ€™t mind working like a dog all my life”, he said, “but I want you congressmen to work just as hard as I do to provide more opportunities, so that my kids wonâ€™t have to work like dogs all their lives as well!â€ Wade, regardless of what you think about his political history, comes off as someone who is results oriented and committed to accomplishing whatever he sets out to accomplish.

Unlike your average politicians with their well-rehearsed talking points and political philosophy polling data, Wade answered every question that was asked of him, not with ideology, but with ideas predicated on experience.

I was reminded this evening, that the average American really doesn’t know what’s going on in Congress. They know what’s happening at home, in their children’s school, at work and in their communities. They don’t know national or state unemployment numbers, but they know when Rick, two doors down, gets laid off from his job.

Americans aren’t looking to vote for John Locke or Thomas Jefferson. They aren’t taking sides between the federalists and the anti-federalists in causal conversations with their friends (lord, they’d hate hanging out with me!). What they want is a guy like Mike Wade who comes to them where they live, talks about the issues they want to hear him talk about, and earns their trust with his no frills, no b.s., authentic answers.

Everyone at Mustang Sally’s genuinely seemed to like Mike Wade. Sallie Earp, the bartender who is always being told that she doesn’t smile enough, is laughing and smiling as Mike Wade demonstrates his quick wit and comedic chops. Dave Eggleston and Lee Pillsbury of Eggleston Group, were passionate about Mike Wade’s brandÂ of retail politics and his willingness to spend his time with his future constituents, as opposed to meeting with the movers and shakers within the party for expensive steak dinners. Sheriff Wade earned votes tonight and he’s been having these kinds of gatherings all across the 4th District. As a Republican running in a district that includes all of Richmond, I’ve got to say, this is how you win elections.

Disagreements aside, Mike Wade will be a true representative to the constituents of Virginia’s 4th District in every sense of the word. I hope that every Republican and Independent in the 4th district, and every Democrat who’s tired of being taken for granted by their corporate political machine, will consider voting for Mike Wade for Congress.

The Virginia Christian Alliance , thank you Don Blake, has been helping distribute a great non partisan voter guide that will help illustrate how much better Mike Wade is than Dirty Don. Anyone in the 4th working the polls should get in touch so we can help win for Mike Wade!

Could it be… Populists???

No. There was nothing “populist” about last night’s event. It was very practical and authentic.

Thanks for this first hand perspective on Mike Wade. I liked learning about who will hopefully be serving along side my Congressman, Rob Wittman very soon. I wish more plain spoken, no frills, down to earth candidates would run for office. I am sooooooooooo tired of the talking points.

You are “tired of the talking points,” yet, you praise Rob Wittman.

Wittman is an empty suit whose every utterance is memorized republican talking points.

Wittman is a PHD and an extremely smart individual. I’ve had great conversations with him on politics.

So, your operation has punted on Crooked Hillary and is regrouping for the down ticket?