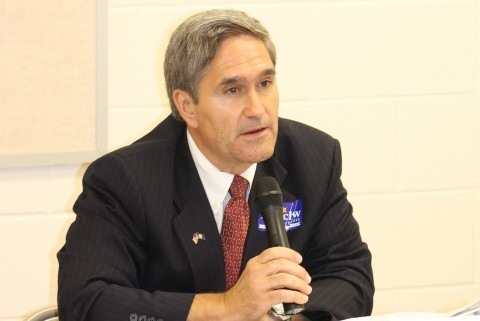 Minchew In Hot Water? State and county leaders in opposition?

While I like Del. Randy Minchew personally, and respect what he has achieved education and career wise as well as his deep dedication to the Boy Scouts of America and its local troops, I still recall from time to time his broken written promise in the form of a pledge not to raise taxes when he originally campaigned.[read_more]

Being a challenge coin collector, several years ago, Del. Minchew and I were standing in line to vote at our local Loudoun County Convention and I gave Del. Minchew a unique collectable Scout challenge coin which I acquired just for that purpose.  Basically, my gesture went hand in hand with my belief in Del. Minchew–a person who kept his word and one who placed honesty and integrity above anything else.  A person who, after so many years, still believed enough in the Scout Oath and Scout Law, being trustworthy, loyal and reverent, to carry those beliefs in his life and into office.

Unfortunately, with the transportation tax bill, we ALL found Del. Minchew broke his written promise to those who placed him in office, those who trusted he would carry their desires and those who he had an obligation to show loyalty.

Ironically, when I gave Del. Minchew that challenge coin, I wasn’t even in his district–now I am.

So, what are we to make of this:

What he didn’t mention in the email, sent from his official state account and signed “J. Randall Minchew, Delegate, 10th House District,” is that he is also a partner at a law firm that represents the housing development, Evermont Trace, that had the airports authority concerned in the first place.

The email, obtained by The Washington Times through a Freedom of Information Act request, shows that Mr. Minchew questioned the airport authority’s concerns that residents might get fed up with noise and eventually lobby to curtail flights out of Dulles.

Mr. Minchew suggested otherwise, telling airport officials in the email that they failed to account for the “advent of quieter aircraft.”

An ethics watchdog said the email raises questions about whether Mr. Minchew was using his elected position to further the interests of a client of his firm.

“It appears Delegate Minchew is trying to use his status as a member of the state legislature to insert himself in a dispute and what reason is there for that other than perhaps that he has a law partner involved?” said Dale Eisman, a spokesman for the watchdog group Common Cause, who was a longtime statehouse reporter in Richmond.

“It’s not part of his duties as state delegate, so why is he involved? If he wants to write as a private citizen, that’s fine. But he’s not done that here. He’s written in his capacity as a member of the House of Delegates.”

Mr. Minchew did not respond to questions about the emails or how he squares his job as a land-use lawyer with his elected position in one of the nation’s fastest-growing counties.

He is managing shareholder of the Loudoun office for the law firm Walsh Colucci Lubeley & Walsh, one of the area’s most prominent land use firms. On its website, the firm says it can handle applications with “substantial citizen opposition” because of its “intimate understanding of the community and its leaders.”

But the county’s Board of Supervisors approved it in a 5-4 decision in September, despite fierce opposition from the airport authority, which said building communities near high-noise regions “will almost certainly result in petitions to restrict aviation operations and airport growth.”

“These types of proposals profoundly affect the economic viability of any airport and could bring substantial limitations on the marketability of Dulles International,” airport authority chief Jack Potter wrote in a Sept. 2 letter to Board of Supervisors Chairman Scott K. York.

Mr. Minchew a month earlier suggested otherwise in his email to the authority, saying the airport’s noise contour was smaller than the authority was claiming — particularly because of new, quieter airplanes.

“I would appreciate it if you would contact me and let me know the basis for your ‘grave concern,’ particularly in light of the currently applicable FAA Ldn noise contour,” he said in the email from his official delegate’s account.

While the message has not been previously disclosed, one local lawmaker already had expressed unease by then about the political influence wielded by Mr. Minchew in the county’s land use application process.

Loudoun Supervisor Shawn Williams accused fellow board members of failing to do their own research, instead taking direction from “a land use attorney who also serves as a legislator.”

Though he didn’t mention Mr. Minchew by name, local media outlets said it was a clear reference to the delegate.

However, the Loudoun County Times reported that Mr. Williams and other opponents also feared the Evermont Trace approval set a precedent that could open the gates to residential applications from other developers, especially the sprawling Brambleton community.

That massive development, a 2,300-acre community with more than 8,000 homes, town houses, condo units and apartments about 30 miles west of Washington, began more than a decade ago.

It bills itself as the “top selling master planned community in the nation,” and lately residents and developers have been locked in another battle over how to build a north-south corridor between Prince William and Loudoun to ease congestion in the sprawling, fast-growing county.

Among other proposals, transportation officials have been studying one proposal to serve Dulles that would be situated near Brambleton, which the development’s community association opposes.

Mr. Minchew, in an issue that has split local and state elected officials, is also a critic of that plan known as the Trans-Brambleton Truck Cargo Toll Road. He wrote an email on April 16 to Delegate David Ramadan.

“I hope you have done your political calculus on this matter,” Mr. Minchew wrote from a private account, though still signed as “delegate, 10th House District.” He warned Mr. Ramadan that some constituents “will not like your advocacy” for the Trans-Brambleton plan.

Five minutes later, he forwarded the message he had sent to Mr. Ramadan to one of his law colleagues and two others, including Steve Schulte, Brambleton’s vice president.

“Do you think this response to Delegate Ramadan is sufficiently clear?” Mr. Minchew wrote.

The email chain was later forwarded to Janet Clarke, a Loudoun supervisor, who thanked Mr. Minchew for opposing Mr. Ramadan. The Times obtained that email through a Freedom of Information Act request to county supervisors.

The company, she said, did give Mr. Minchew a $2,000 donation in 2011. The Virginia Public Access Project, which tracks campaign donations, lists $6,000 in donations to the lawmaker over the years.