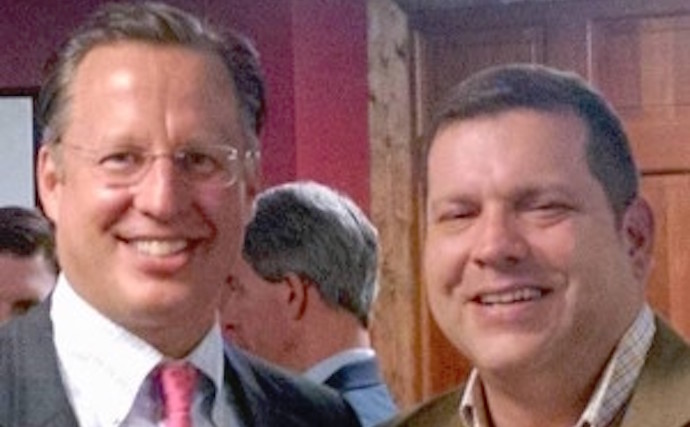 Below are several screen captures that highlight our problems in the Republican Party. I have written several articles on TBE about the changes needed by the Republican Party of Virginia (RPV), and if interested you can go here, here, and here to read them.

The interesting information here is the lowest Liberty Score for Barbara Comstock at 19%, and the highest score of 100% by Tom Garrett and Dave Brat. BTW: Dave Brat has been at 100% for the two terms he has been a Congressman. Tom Garrett is off to a good start.

This is Conservative Review’s list of Virginia’s Democrat Representatives. 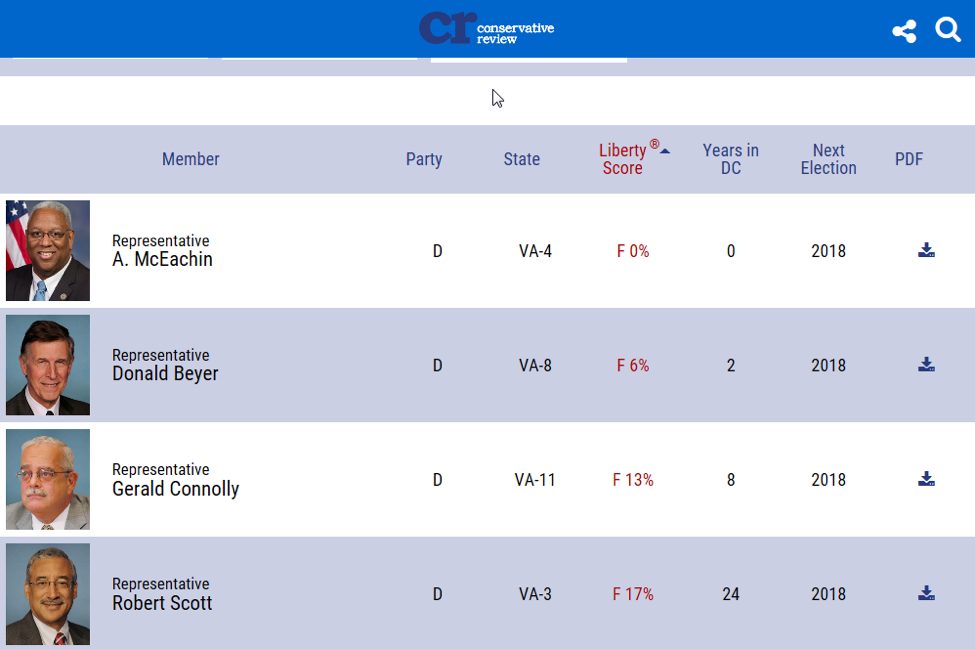 Notice they range from 0% for Don McEachin to 17% for Bobby Scott. The take away from this is that the bottom of the Republican Caucus is the top of the Democrat Caucus. Essentially, the only difference between Barbara Comstock’s 19% and Bobby Scott’s 17% is that Barbara has an “R” behind her name. BTW: She is only 6 percentage points above Gerry Connelly at 13%.

1. There is only one Virginia Republican Congressman that received a “C” grade (Morgan Griffith at 71%);

3. A grade of “F” for Scott Taylor (50%) which should probably be ignored since he just took office.

4. Notice that Dave Brat and Barbara Comstock entered Congress at the same time (within a few days) and Dave’s consistent 100% with Barbara’s consistent “F” score over the same time period. What is the difference between these two Representatives?

5. Why aren’t all of our Representatives at least a “B+” or better? Is it too much for us to expect that our elected officials, that claim to be and campaign as a rock ribbed Conservative, have at least a score of a “B+” or better.

Please notice the little indicator under the column labeled PDF. When you are on the Conservative Review site, you will see the ten categories where votes are reviewed by clicking on that indicator. The Liberty Score uses the last 50 votes from these categories for the last six years. This is part of the transparency of the Representatives’ voting record.

The following are the categories used in determining the Liberty Score.

Below is a recently received fund raising letter from Barbara Comstock. I circled several areas to examine exactly what they mean. 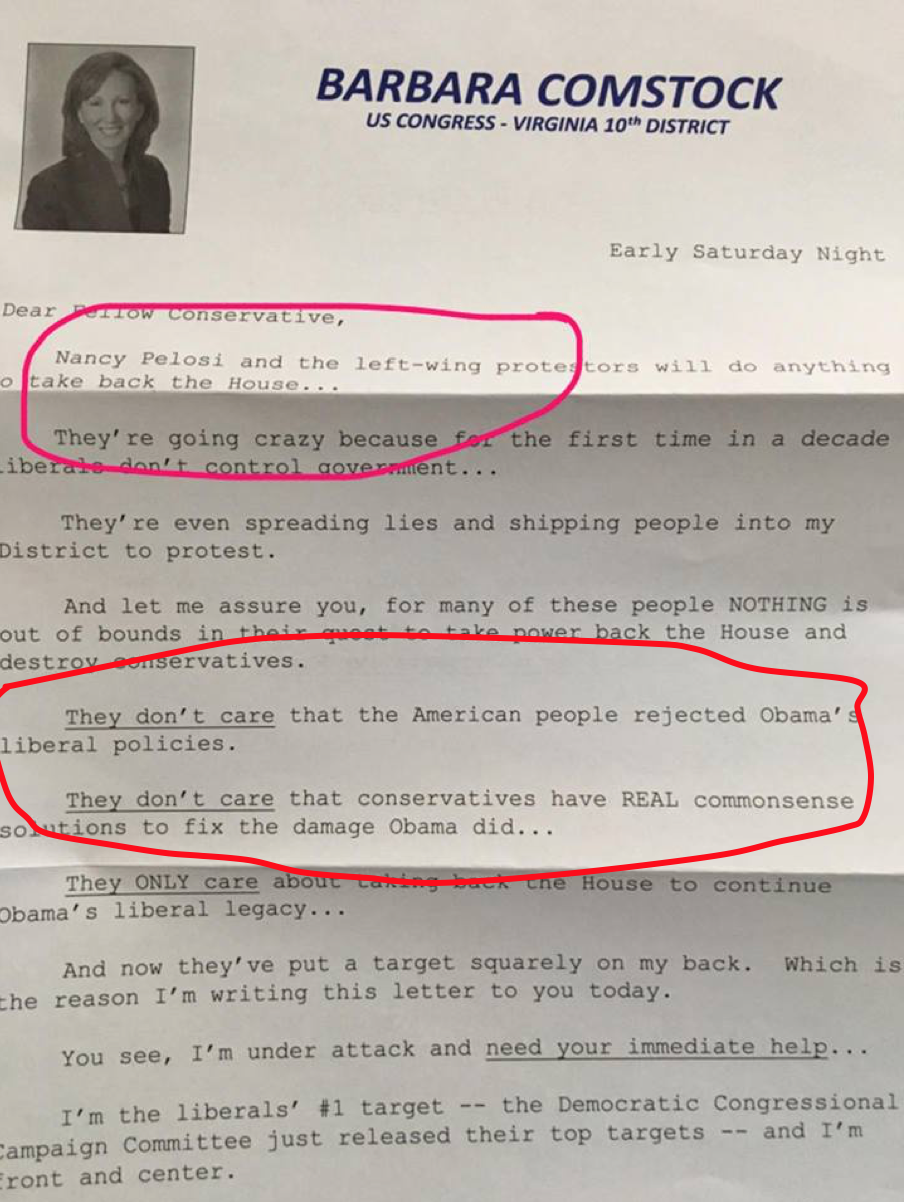 1. The only reason Nancy Pelosi would want to take the 10th District of Virginia is she doesn’t think she can count on Barbara’s support when the Democrats try to impeach President Trump. However, with Barbara’s contemptuous lack of support for President Trump and a 19% Liberty Score, Nancy should not rule her out.

2. Obviously, the American People rejected Obama’s Liberal Policies, but with a 19% Liberty Score, Barbara did not. Conservatives do have a commonsense approach to fix the problems that were inflicted on America by Obama. Obviously, Barbara does not believe in this commonsense approach with her 19% Liberty Score. This is just another attempt for Barbara to campaign as a “Conservative” so that when she is reelected she can govern as a fellow Liberal Democrat. 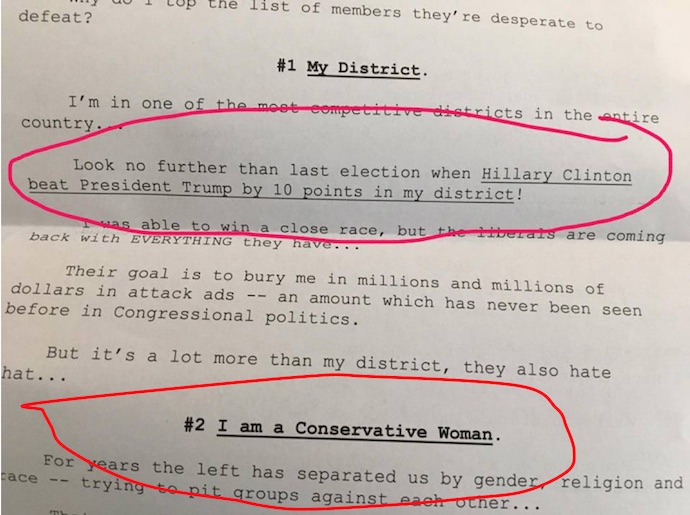 3. Why would the Democrats consider the Virginia 10th District as a competitive district? The Democrats already have a “Democrat” at a 19% Liberty Score. There is a concept taught in Economics called Diminishing Marginal Utility. I know the Democrats think that economic laws don’t apply in the Liberal worldview, but how much more liberal a representative do they need that would justify fielding 8 candidates against Barbara? It seems to me that they are going to spend a lot of time, effort, and money to gain only a few percentage points of increased liberality.

4. In what universe is Barbara Comstock a Conservative Woman? She has alienated TEA Party Republicans, Libertarian Republicans, Traditionally Conservative Republicans, and Deplorable Republicans. Maybe she is counting on the ever shrinking group of Establishment Republicans and their duplicitous Democrat friends to insure her nomination.

It won’t be long before Establishment Republicans will wake-up and insist on our elected officials governing by the same campaign Conservative Principles that they use in fund raising letters.

Just in case you think Barbara is an exception to the rule, let’s take a look at several fellow Representatives with Liberty Scores similar to Barbara’s. She is in the company of her peers. In fact there are only two Republicans with a Liberty Score lower than Barbara’s.

My hope is that we defeat Barbara Comstock using her self-requested Primary. Currently, Shak Hill has thrown his hat in the ring for the 2018 Primary. I hope we don’t flood the Primary with many egotistical Conservative candidates.  I would not be surprised by Barbara paying semi-conservative candidates to enter the primary to split the Conservative vote. One of the things she is counting on is winning the Primary by a plurality decision. We need to make sure we have a binary choice. Liberal Barbara vs a true Republican Conservative.

Maybe one of these days our 10th District Committee will be strong and independent enough that when we have a Representative so far out of step with the Republican Party of Virginia that we do not let her/him run as a Republican.

Also, maybe one of these days, all of our District Committees will expect that our elected officials maintain at least a B+ or better Liberty Score.