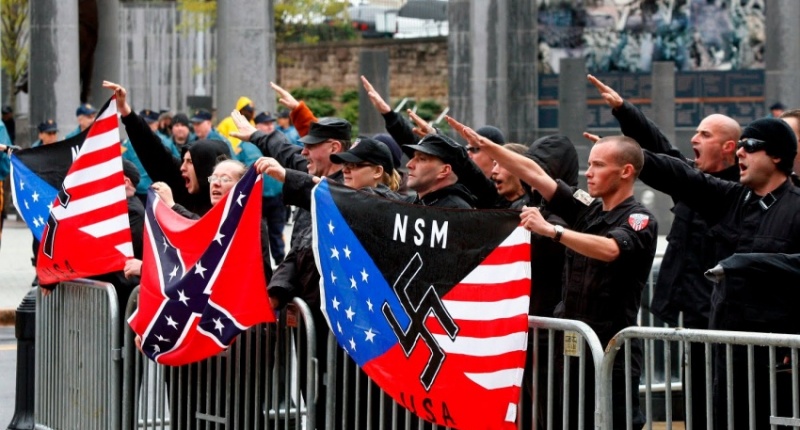 Minority Power, Leprosy, and the Alt-Right

When the alt-right appears on the scene to take credit for Donald Trump’s victory, you have to ask yourself whether or not to take them seriously. After all, these white-identity politics people came out of the woodwork first for the white billionaire, pro-America, anti-immigrant, anti-Chinese candidate, Donald Trump. Now, whatever they thought Donald Trump was going to be as a result of Donald Trump’s rhetoric, will likely be the same factors which will be used to fuel their disappointments in the future.

Trump isn’t alt-white, or alt-right, or alt-anything. He’s the epitome of a Rockefeller Republican. He’s established the most successful and, therefore, most wealthy Cabinet in history. He’s brought back many of the Bush people in an act of pragmatism. It turns out that he is not going to persecute his political opposition after making imprisoning them the hallmark of the last quarter of his campaign.

Regardless, you will see these alt-right underground websites attempting to throw their weight around, trying to claw their way into relevancy by waxing-bigotedly on Republican primaries in the run up for our statewide elections in November of 2017. If they’ll share anything in common, it’ll be their support for Corey Stewart. In fact, they will likely be the only websites supporting the Prince William Supervisor in 2017.

This is not a criticism of Corey Stewart. Remember, these alt-white people aren’t galvanized by candidates who simply share their values – none of them do. However, they will support candidates that they think they can use to support a few of their favorite issues. Stewart’s intransigent positions on illegal-immigration in the Commonwealth makes him a lightening rod and a strip of fly-tape for the Make America White Again crowd.

I think all Americans should be concerned about systemic breakdowns in the rule of law; and our tolerance of illegal immigration over the last 36 years is certainly a national systemic breakdown in the rule of law. Alt-right underground sites will use this wedge-issue within the Republican Party, however, to empower themselves and their liberal tactic of identity politics. Promoting them will lead to a rejection of the Republican Party by the vast majority of the rest of the country.

Over the last six years, Republicans—serving as an opposition party—have retaken the vast majority of legislative seats across the country, at both the state and national level. To hold that power, they need to demonstrate their ability to achieve objective victories across the board. First, because James Carville was right, Republicans need to focus on reinvigorating the economy. That means repealing Obamacare and returning to free-market healthcare solutions. That means relaxing hundreds, if not thousands, of regulations which strangle small business and dozens of subsidies that prop-up big business. It means executing a successful foreign policy aimed at creating stability and a reduction in trade barriers. It means more federalism and a return of power and independence to State Governments.

And yes… it means reestablishing the rule of law, crafting a common-sense immigration plan and enforcing immigration laws across the board. However, on an issue as controversial as immigration, there will be no way to get everything we want without compromise and the alt-white people will be there to attack anyone that tries to move the ball down the field 4 yards at a time, instead of trying for a 99 yard Hail Mary. The problem with Hail Mary’s is that they almost never work and teams usually end up turning over the ball.

This is something minority factions in the Republican Party need to keep in mind; it takes many battles to win the war and sometimes you have to retreat before achieving victory. Frustrated by their inherent powerlessness, political minorities often believe that the only way to score a win is to hold the party hostage unless they get what they want on some unpopular piece of legislation. They sacrifice their own ability to march the ball down the field in favor of short-term and high-profile priorities.

In football, if the Hail Mary was the only play an offense could run, it’s hard to imagine that team winning many contests. Likewise in politics…political minority factions need nuanced leadership and patient strategies to be effective. They need to be instrumental parts of the larger team. There will come a time when the coach will call a play for them, usually when it has the best chance of victory.

Stay away from the alt-right, from the radicals, the perpetually discontented, the hostage-takers, and the Republicans using Alinskyite tactics against other Republicans. Stay away from the activists wielding their pitchforks and talking of all-or-nothing victories. Help the Republican Party move the ball down the field 4 yards at a time. This isn’t easy. There will be compromise. There will even be retreat. Just keep moving the ball down the field.

Democrats have been using this strategy successfully for one hundred and twenty-five years. They have proven that it is the only strategy that works; and when, in 2009 and 2010, they overplayed their hand (just that once), what happened? They lost everything.

Learn from experience. Learn from history. Don’t trust firebrands screaming epithets from the wilderness. If you want to defeat the creeping march of authoritarian liberalism, help small-r republicans methodically move the ball down the field. Hold them accountable, but also help and encourage them.

Stay away from the wilderness, from the alt-right; or if you cannot, do not bring their leprosy and small-pox with you back into town.

I’m so tired of these pictures of less than 12 people as representative of the entire Conservative voters. Stop giving these people any substance and just deny that they are us. They aren’t.

They are representative of Conservative voters in that they were brought into the fold under the mantra of “win at all costs”. They gave you what you wanted and now it’s time to pay up.

And if we’re still adhering to Reagan’s 11th commandment, which I do not, I actually have higher standards for those that are supposed to represent me, then move on over and stop bellyaching.

See, stick can be used against conservatives too.

You are showing desperation to even comment like you do. No “one brought them into the fold”. Democrats are so jealous and instead of looking at your Party and asking them why they ran such a corrupt, weak candidate and then why Trump beat out 16 other GOP candidates…..it is because not one candidate had the guts to bring up the big problem of illegal immigrants flooding into our country. Only Trump did and that is what made many Dems switch over and vote for him also. Did you know that Cuba is flying people to Mexico to get into our country and the Castros are probably emptying his jails and mental hospitals on us like he did decades in the past.

Right, but the purpose is to use that as a stick against populists Republicans.

[…] This morning, reflecting on some troubling and disturbing blogposts that have been popping up amongst a fringe alt-right element intent on influencing Republican Party Politics in Virginia, I wrote, […]

When did White Supremacists become the “Alt-Right?” And when did those of us who believe in borders, culture, and language (such as Michael Savage) somehow get thrown in with the Storm Front types? There is a huge difference, at least in my way of thinking, in not wanting one’s group to become marginalized in one’s own country AND in striving to put one’s group over others and deprive those other groups of their rights such as with Neo-Nazis.

Why don’t you read up on the entire F-35 to Israel purchase. And then write a thread on why they had to get what they did before they would agree to buy the F-35 from us with money that we give them?

If this nearly half trillion dollar plane program is as good as we are being led to believe, then why were the Israeli’s not begging for them? Why did we have to agree to export jobs to Israel, and their other demands, before they would buy a fighter that is supposed to be so far ahead of everything else, using money that we give them?

With your background, perhaps you can explain it?

Why don’t you spell it out so I can understand it better?

Now why didn’t my plug-in register this as fake opinion? Fixed it, turned up subtle on the propaganda.

When will this kind of boxed-in circum 20th-century ‘formulation’ fade into irrelevance? By intellectual ideation, this article is more rear-view mirror than looking down the road. You nailed it!

I got a long comment all written up Tucker, in response to this thread. However, I am beginning to feel guilty about dissecting your posts. So, I may just trash can my comment. Not sure how much more of the truth that you can handle.

Please, do not worry about my feelings. 🙂

You know Tucker, you are the perfect example of Republican politics, and the American way. Honesty, and being the best qualified, will not buy anyone even a cup of coffee in America anymore.

And yet? You get promotion after promotion, to a higher level blog. It’s very clear that you are somebody’s propaganda tool. Somebody has got you on a very short $leash$. Why don’t you tell those who do not know just how this $game$ is played, Tucker? Who is financing your propaganda Tucker?

And you talk about relaxing regulations. This is nothing but pure corporate BS. American jobs are exported/imported because of cheap labor, $3 HR. down there and over there, $30 hr. here in the US. No tax reform or regulation is ever going to change that. If regulations and taxes were the problem, why do American companies hire illegals???????

The Republicans are going to bury middle-class America in a cheap, imported, cardboard coffin, and apparently, the Democrats are going to help them do it.

What makes you think I’m being financed when at the same time I’m not supporting any one faction of candidate? Your hypothesis doesn’t make any sense.

In my opinion, you are supporting the establishment and their drive against populists.

I guess you have determined that there is some type of gain in it for you.

And, apparently there is???

Yes, defeating populists is its own reward.

Would you be so kind as to define exactly what you consider a populist? The only definition I can find seems to be a regular John Doe, who may just not fancy to elitists. And, Trump and his cabinet, are actually about as far away from being populists as one can get, if my understanding is correct.

Which candidates and factions benefit from one so sponsorED?

Not answering, responding with a question, attacking the premise, criticizing the challenge, seems kinda unanswerED.

Pearls before swine, besides, you’re just a populist.

Well thanks to Mr. Tucker and google, at least I now know what a shingle froe is.

He’s pretty clear about it, he feels betrayed by the candidates and political parties, I’m in one and I can’t disagree with him on that.