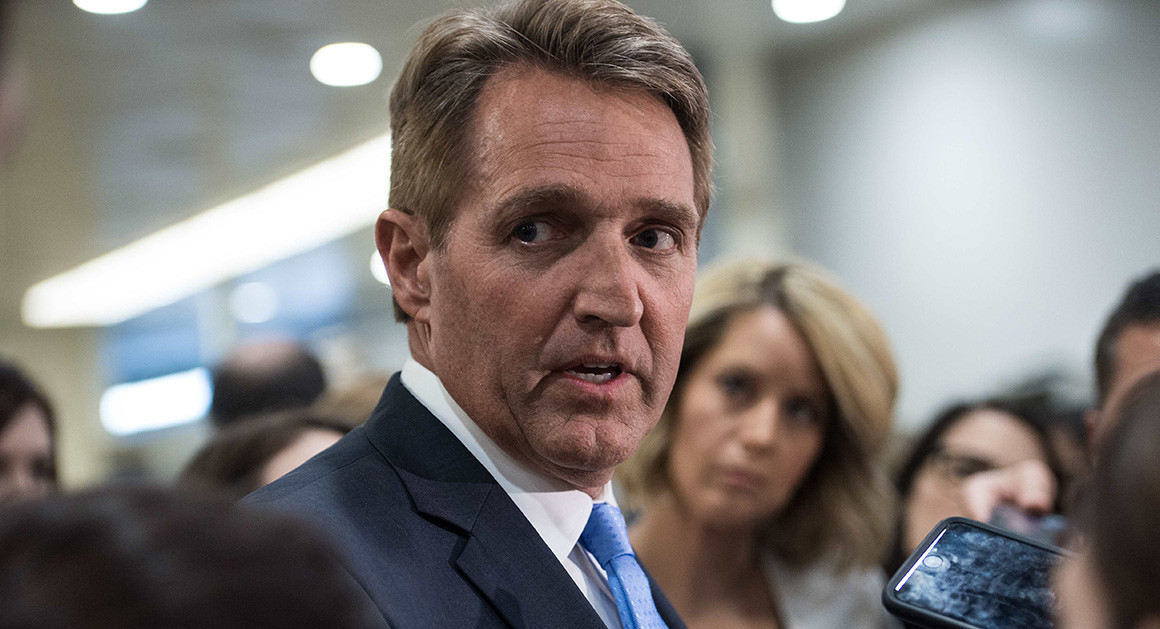 The bottom line is if I were to run a campaign that I could be proud of, and where I didn’t have to cozy up to the president and his positions or his behavior, I could not win in a Republican primary.

Essentially, Senator Flake is choosing exile over trial by combat. I get it. If you’re pretty certain that you are going to lose, then it makes sense to bail; but there is something deeper going on here. More and more moderates are taking to the sidelines, hoping to wait out Trump in the hinterlands until such time as they feel it safe to return and to return the Republican Party back to the business of doing business.

They seem to understand that President Donald Trump and his burgeoning army of populists, nationalists, and patriotic ex-NFL football fans are the new Republican Party. The moderates, libertarians, and conservatives have lost whatever power they had.

Trump is the Republican Party.

Yet, why choose exile? This makes no sense to me. Why not fight?

Who are the real Burn It To The Grounders here? Flake knows that Trump won’t find anyone able to win a statewide race in Arizona. Flake knows that the Democrats are going to pick up the seat and that it will likely, eventually, cost the Republican Party the Senate. He’s not falling on a grenade here. He’s throwing one right into the center of Mitch McConnell’s office.

And what are Senators Ted Cruz and Mike Lee doing to build consensus with the moderates in the Senate? Compromise isn’t complicated. The area between the principles on which each individual Republican Senator is unwilling to compromise and the Republican Party’s end goal, is a bill that can pass with 50 votes.

Well, I guess Senator Rand Paul is out. Damn.

The Republican Party cannot survive populism or fracture. Today’s populism will lead to new populisms, each one asserting that it is the government’s job to perform some new role, to deliver some new justice, to protect some new market, or industry, or business. Nationalism is great. I love America as much as anyone, but global stability and international diplomacy requires work. We can’t achieve peace by waving flags. We cannot water the seeds of capitalism in the world by chanting, “America First!”

Moderates, Conservatives, and Constitutionally-motivated Libertarians need to join together to preserve the intellectual history and integrity of the Republican Party, setting aside our century-old ideological differences.

Besides, Senator Flake, President Trump is accomplishing a great deal of good. Sure, it’s hard to see behind the haze of his monosyllabic tweets and imbecilic behavior – but it’s there just the same. It wasn’t Trump that failed us on repealing Obamacare. Trump gave us Gorsuch. Trump undid much of the damaging regulations imposed on American businesses by President Obama. Trump returned the military to the best wisdom of his military commanders and ISIS is being swept away in the wake of such a profoundly important executive decision.

Moderates, Conservatives, and Libertarians need to band together and reassure the American People that 500 years of Conservative Tradition hasn’t been defeated by populism and histrionics. We need to ensure that the good things Trump does become entrenched and that the stupid things Trump says are quickly dismissed.

Now is the time to hunker down and focus, not pack it in and head home.

There is no such thing as a successful third party. If you don’t like your party choices, your only practical option is to change one of the existing parties. Playing with a third party is tantamount to self-exile. Study history…. see Obama, see Trump. Then consider Ron Paul, John Anderson, ad infinitum…

Wow, another “I’m a better Republican than you” lesson from SBT. He states, I love America as much as anyone, but global stability and international diplomacy requires work. We can’t achieve peace by waving flags. We cannot water the seeds of capitalism in the world by chanting, “America First!”

Well sir, maybe you should have put on the country’s uniform and seen more of the world instead of philosophizing at the university. My time overseas showed me we need more “America First” in our policies. These past many years have put us at a disadvantage – it’s time to take care of ourselves for a change. Once back to a position of strength, we are in a better place to help others. I’m not an isolationist, but we need to look after ourselves first.

As for these buffoons who call themselves “Moderate”, it’s hard to compromise with those who campaign as conservatives and legislate like liberals. Just because they have an “R” behind their name doesn’t mean anything to me anymore. I hear what they say, but I watch what they do. There’s no compromise with Democrat-lite.

I understand that. The moderates would rather burn the party to the ground than compromise with conservatives. It’s frustrating as all hell. But we’ve got to keep our principles in the meantime.

Also, you’re right. I should have served. It is a regret of mine.

“Trump is the Republican Party.” – you poor delusional soul

Actually, I think that is best line of the post. It succinctly and accurately encapsulates the current state. That is why these folks are choosing exile. Trump is bending the Party to his will.

We are going through the birthing pains of a new Republican Party.

Someone I know well asked me why Flake and others in DC hate Trump, and I had to explain to this person that 92% of GOP voters voted for Trump in 2016. Now some of them voted for Trump while holding their nose. But they still voted. Flake and many inside DC don’t get one simple fact. The overwhelming majority of Republicans, be they conservatives, Tea Party types (such as myself), moderates, libertarians, support Trump. They may get offended by a few of his Twitter comments, but otherwise they will vote for Trump again in 2020. Flake has spent so long inside the Beltway that he likely can not comprehend this fact. Same with so many others in the GOP who can’t stand Trump. Now I can understand not liking Trump – but a few (Flake, McCain for example) have taken it too far.

And as much as I hate to say this, Lindsay Graham has been pretty mature when it comes to his feelings on Trump. Graham has been trying to work with the Trump administration where he can, and opposing Trump or trying to cut a deal where he can not. No I’m not saying that we should support Graham, because he needs to go as well. But let’s give credit where credit is due.

and you don’t get on simply fact, the reality of Trump is not good for US

He’s a whole lot better for US than Hillary!

not sure why you are changing the topic – stay focused. we are discuss just how bad Trump is

No. That’s what YOU are discussing, while the rest of us discuss the article. It’s your one topic of conversation. (Yawn). There are plenty of leftist sites, exclusively devoted to Trump bashing, where everyone would love to be your echo chamber if all you want to talk about is how bad you think Trump is.

maybe you should read John’s post before you go off and say silly things???

Senator Lindsay Grahamnesty?
If the gang of 8 hat fits he must wear it.

As one of those libertarians you mention, I can tell you that I’m WAY more disgusted with the GOP moderates than I am with Trump and his populist allies.

And since its clear now that the GOP has no desire to pass anything useful (such as a full repeal of Obamacare), I’m perfectly happy with the current state of gridlock.

Gridlock is virtuous when the uniparty establishment is all in favor of larger government and more wars. It holds the status quo until voters can use the primary process to vote the bums out.

Rob, I get it. Vengeance feels amazing.