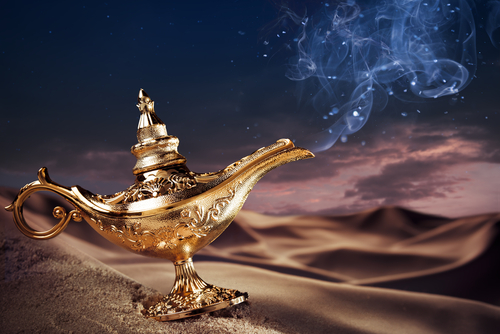 Once upon a time there was a boy named Matt.

Matt lived in Loudoun Land, a place of congested roads and crowded schools.

One day, walking to school, Matt found a strange old bottle with the top still on.

Matt opened the bottle and a genie, dressed in light brown, with an “M” on his chest appeared.

“I am the Metro Genie and I will grant you three wishes.”

The Metro Genie waived his arms and said “done, great one” as he disappeared back into the bottle.

Matt took the bottle home and put it in the nightstand drawer.

The next day three Metro Stations appeared in Loudoun Land.

Matt was so happy!

Then something bad happened. Matt got the repair bill.

“I can’t pay this,” he said.  “It’s not fair. The Metro Genie didn’t tell me the trains were in bad shape, the tracks were dangerous, the tunnels were crumbling and we owe retired workers gobs of money for their pensions,” groaned Matt.

He pulled out the magic bottle from his nightstand and again opened the bottle.

The Metro Genie appeared.  “Metro Genie, you never told me the Metrorail I wished for was in bad shape,” he complained

The Metro genie replied:  “Oh great one, you did not inquire about the condition of the Metrorail, but you can fix it with your next wish.”

“Consider it done great one,” said the Metro Genie as he waived his arms and slid back into the bottle.

Matt was happy again, he had gotten his Metrorail and money to fix it.

Matt was livid.  In the Washington Post he called the legislature “disgraceful,” but he found everybody else at the Chamber School, except Greg, only cared about Metrorail and not raising taxes. They weren’t concerned about Loudoun Land.

For the third time, Matt summoned the Metro Genie.

“Metro Genie, when I wished for money for Metro I did not mean for you to take the money earmarked for desperately needed Loudoun road improvements,” Matt sobbed.

“Oh great one, you wished for money, you did not inquire about where the money might come from,” said the Metro Genie.

Having wised up, Matt told the Metro Genie:  “I wish for Loudoun Land’s roads to be fixed and I don’t want the county to spend any money.  Other people must pay!”

“Great one, your wish is granted,” said the Metro Genie.

The next day six homebuilders filed rezoning plans for huge housing developments.  We’re talking thousands of homes. The builders proposed upzoning land intended for single family homes to townhomes and condos.  Commercial real estate would be rezoned to residential. Through proffers to support their projects, the developers pledged to make some of the needed road improvements.

Then Greg called.  He was real mad! “Matt, what did you do?  Sure the builders will pay for some road improvements, but now we’re going to need more roads, ten new schools, a thousand teachers, libraries, senior centers, parks, social services, police and fireman to support all this new development.  We’ll have Metro, but our quality of life will be worse than before and we will be paying a lot more taxes,” bellowed Greg.

Matt knew Greg was right.  He knew would have to vote for all the new development to pay for Metro, even if it made life in Loudoun Land worse.

The next day Matt threw the magic bottle into the pond in front of the Dulles Airport Marriott.

Matt was dropped from membership in the school Republican Club.

The moral of this story is be careful what you wish for!

The author is the President of Blue Lion Computer Sales, Inc.  Among his many talents, Mr. Sanders is one of Loudoun’s great storytellers.

Thomas Sanders is the former president of Blue Lion Computer Sales, Inc. Prior to moving to Loudoun County, he lived in Cumberland Maryland, Fairfax County Virginia, Atlanta Georgia and Florida.

Most people reading this aren’t going to get all the local nuance, but this is pretty darn funny and spot on.

Mr. Letourneau voted Loudoun right into this mess and has no way out. He got played and has to live with it. Ironic that he is on the NVTC that got the fiscal ax.