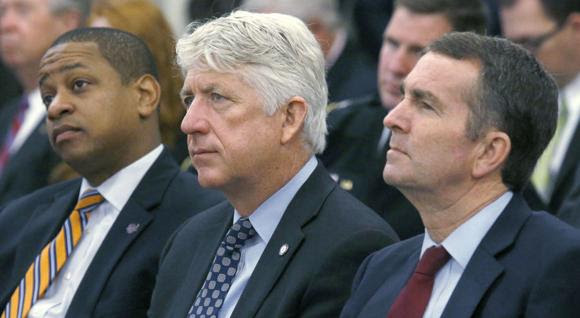 Lately, we have been treated to a spectacle of spectacular callousness by the top 3 elected officials in the State of Virginia.  You might think of them as the Three Stooges of politics for their hapless shenanigans.

The first one, Governor Ralph Northam, is a doctor…a pediatrician, no less…who advocated for infanticide in no uncertain terms: “The infant would be delivered. The infant would be kept comfortable. The infant would be resuscitated if that’s what the mother and the family desired, and then a discussion would ensue between the physicians and the mother.” He meant that the mother could tell the abortionist doctor to kill her baby AFTER birth. Killing a live human is murder, nothing less.  But, the Governor was not done. A yearbook from his college days was made public and it purported to have a white man who painted his face black standing next to someone dressed in a Ku Klux Klan robe and hat.  The Governor first apologized for his lack of racial sensitivity in wearing blackface but then questioned whether that was actually him in the picture. No kidding!

The second, Lt. Governor Justin Fairfax, has been accused of sexual assaults by 2 women, one of whom, Dr. Vanessa Tyson, plans to meet with the District Attorney of Boston, MA to report the rape allegation before the statute of limitations expires.  How did Lt. Gov. Fairfax react? An admission that the encounter did take place in 2004 but denial, of course, that it was anything but consensual AND, according to the Boston Globe, threatening to initiate criminal charges against Tyson! You can’t make this up.  What happened to the “we must believe the woman” mantra even if there is only an allegation of a crime? This was what the Liberal media and Democrats on the Senate Judiciary Committee told us while the nation was subjected to an appalling confirmation process hijacked by dishonorable Democrats bent on derailing a good man’s, Brett Kanavaugh, nomination to the Supreme Court. Does that standard only apply to Republicans accused of sexual assault while in high school?

Number three in this parade of jesters is Attorney General Mark Herring. He, too, admitted painting his face black with shoe polish in 1980: “This was a onetime occurrence and I accept full responsibility for my conduct. That conduct clearly shows that, as a young man, I had a callous and inexcusable lack of awareness and insensitivity to the pain my behavior could inflict on others. It was really a minimization of both people of color, and a minimization of a horrific history I knew well even then.” That is one good apology; but, he did the deed, didn’t he?  Imagine ANY Republican who might have dressed in blackface and offered a sincere, heartfelt, principled apology as Herring did?Hit the road, Jack, and don’t you come back no more, no more, no more, no more. Case closed.

Here in Virginia, We the People are now the laughing stock of the country. The home state of George Washington, Thomas Jefferson, James Madison, Patrick Henry, and Meriwether Lewis to name but a few luminaries has been reduced to being the butt of ridicule as our top three elected officials have collectively been exposed as endorsing infanticide, being racially insensitive, engaging in sexual predation, and lying to the public.

But, none will do the honorable thing and step down from their exalted, and taxpayer funded, positions. No, their feelings…and, especially, Democrats’ political ambitions…come first.  It is hard to believe that the Democrat Party of Virginia, prior to nominating them, did not look into these three characters’ backgrounds. Or were these 3 political hacks actually the best the Democrats had to offer in 2017? And how could the Republican Party of Virginia not find this sleaze in its opposition research?

Whatever the case, we’ve had enough of the modern-day version of Moe, Larry, and Curly. It is time for them to call it quits.  Let the citizens of Virginia get over their profound mistake of electing them in the first place and let the state’s government get on with the business of representing its citizens’ interests unimpeded by the embarrassment created by the Three Stooges of politics.