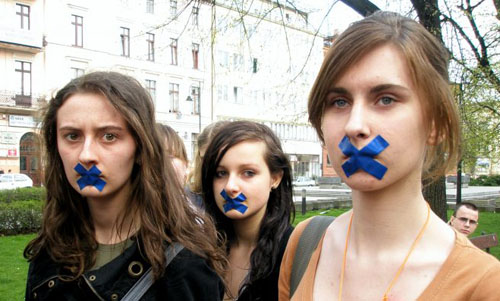 Remember when college was the place for free speech and free thought? Not anymore. Now students are being silenced.  At James Madison University students have been given a list of 35 things they should avoid saying on campus.  Even saying “politically correct” is politically incorrect.  The University has issued this list of phrases that are to be avoided on campus:

At American University the student government has requested that all textbooks and course syllabi have trigger warnings for the special snowflakes. From insidehighered.com:

“There’s a difference between our students and our faculty about the necessity of trigger warnings on syllabi and the importance of centering student trauma in academic spaces,” Devontae Torriente, president of American’s student government, says in new YouTube video introducing the group’s #LetUsLearn campaign in favor of such warnings. “The fact of the matter is, trigger warnings are necessary in order to make our academic spaces accessible to all students, especially those who have experienced trauma.”

In doing so, we uphold [American’s] commitment to academic freedom and allow all students to participate in the exchange of ideas and discussion.”

Last year the faculty at American voted against having trigger warnings on their syllabi. Read more about this campus ridiculousness here.

Except that once again, you have the story wrong. If you following the links, the university said, “The list was not distributed to our first-year students nor were the volunteers instructed not to use the phrases.”

So, it was an exercise with student leaders to open a dialogue about word and phrases, not an attempt to limit what the students say on campus.

For those perpetual haters like David, Steven, and the rest, perhaps you should be a bit more wary about article Jeanine posts since she is trying to fan the flames of hatred instead of reporting news.

The list is accurate and was distributed on campus. Leave it to a lib to want to bury the truth. But I can’t blame you when your fellow libs do stupid stuff like this.

Unlike you, I am not making up a story. Did you read the actual information behind this or di you merely, post the link? Maybe if you did your own research and thinking, you would see that the quote I provided is accurate. The purpose of the exercise was not to limit what students could say. Rather, it was for them to start to think about the consequences of what they say, something that you and the other principal writers here rarely do.

Why must you continue to destroy your own credibility with lies and hate?

Did you read what you posted. Where is the spin?

One more reason public funding of higher education should be yanked.

So when are states (specifically red and purple states) going to start pushing back against all of the far-left insanity happening at public universities?

What the hell are they waiting for?

It’s so sad what these kids have to go through these days.

Off topic I know, but this is brand new and quite good.

Okay, here’s one that white folks are sick of hearing:

All three of those girls in that photo look like they are getting ready to “turn”, just like on The Walking Dead. Zombies.

What about the guy behind them photobombing?

The guy on the bench? I can’t tell if he is wearing glasses or his eyes are sunken in, but they all have that unhealthy white paste look. It is really sad to see young people looking so bad in America. They are scary as in you don’t know what someone could talk them into doing.