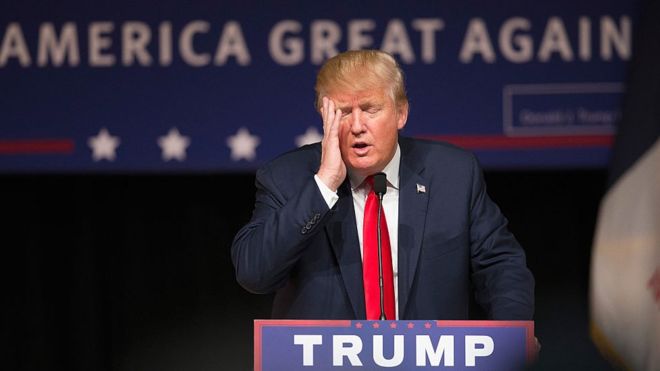 The list of Republicans calling for Trump to withdraw continues to expand. Currently there are at least    (too many to count) members of Congress who have urged him to quit the race, including one member from Virginia, Barbara Comstock. Three former candidates for President have asked for Trump to withdraw, George E. Pataki, Jon Huntsman Jr. and Carly Fiorina. Senator John Thune and Governor Dennis Daugaard, both of South Dakota want Trump to step down.  Senator Thune is also Chairman of the Senate Republican Conference.

“If I ever heard anyone speak this way about [my daughters and granddaughters] they would be shopping for a new set of teeth … I am focused on saving the US Senate.”

Meanwhile, on Saturday Trump vowed to “never withdraw”. Of course he says this, reminds me of when Presidents say someone has their full support, until they don’t.  Trump will vow to never withdraw until he does.

This afternoon a third Governor, John Kasich of Ohio, withdrew his already weak support for Trump. He joins Governors Dennis Daugaard and Gary Herbert in asking Trump to step down.

This afternoon more Republican Congressman joined the chorus for Trump to withdraw including Rep. Mia Love of Utah and Nevada Congressman Joe Heck.

In withdrawing his support, Idaho’s Sen. Mike Crapo had this to say:

I have reached a decision that I can no longer endorse Donald Trump. This is not a decision that I have reached lightly, but his pattern of behavior has left me no choice. His repeated actions and comments toward women have been disrespectful, profane and demeaning. I have spent more than two decades working on domestic violence prevention. Trump’s most recent excuse of ‘locker room talk’ is completely unacceptable and is inconsistent with protecting women from abusive, disparaging treatment.

Make no mistake – we (need) conservative leadership in the White House. I urge Donald Trump to step aside and allow the Republican party to put forward a conservative candidate like Mike Pence who can defeat Hillary Clinton.”

Radio Talk Show Host Hugh Hewitt is urging Trump to withdraw from the race, saying there is more coming out against Trump:

For the benefit of the country, the party and his family, and for his own good, @realDonaldTrump should withdraw. More and worse oppo coming

Condoleezza Rice calls on Trump to step down,

Enough! Donald Trump should not be President. He should withdraw.
As a Republican, I hope to support someone who has the dignity and stature to run for the highest office in the greatest democracy on earth.

“As I said yesterday, Donald Trump’s comments were offensive and wrong. I had hoped to support the candidate my party nominated in the primary process. I thought it was appropriate to respect the millions of voters across the country who chose Donald Trump as the Republican Party nominee. While I continue to respect those who still support Donald Trump, I can no longer support him. I continue to believe our country cannot afford a Hillary Clinton presidency. I will be voting for Mike Pence for President.”

More on how the party can replace Trump here and here.

Most recent list of 150 Republicans who do not support Trump and when they reached their breaking point with him.

Sunday addition to the growing list of Republican electeds urging Trump to step aside:

“I will not vote for a candidate who boasts of sexual assault. It is my conclusion that Mr Trump is unfit to be President.”

“If I support him for president, I will be telling my boys that I think it’s OK to treat women like objects – and I’ll have failed as a dad. Therefore, I can no longer support Donald Trump for president and will not be voting for him or Hillary Clinton.”

“Donald Trump’s behavior makes him unacceptable as a candidate for president, and I won’t vote for him.”

“This video exposed not just words, but now an established pattern which I find to be repulsive and unacceptable for a candidate for president of the United States. I cannot support him as my party’s nominee.

“I must be true to those survivors and myself condemn the predatory and reprehensible comments of Donald Trump. I withdraw my endorsement and call for Governor Pence to take the lead so we can defeat Hillary Clinton.”

“It would be wise for him to step aside and allow Mike Pence to serve as our party’s nominee.”

“I cannot and will not support Donald Trump for president. He has forfeited the right to be our party’s nominee.”

“Donald Trump’s comments and behavior were reprehensible, vulgar and extremely disrespectful. He was not my choice for our nominee and I never endorsed him. I have always said that I want to see a positive message and winnable strategy against Hillary Clinton from the Republican nominee. It is disappointing, especially for Americans who are looking for real leadership and integrity in their presidential candidate, that Trump has not been able to clear that bar. Americans deserve better choices for the highest office in the land. Trump should consider stepping aside. Otherwise, this will continue to consume the remainder of the campaign and help Clinton become the next president.”