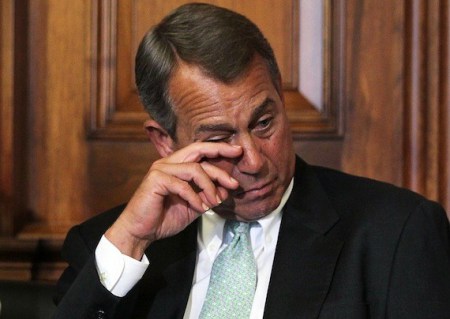 2. There are some claims that Boehner did this to “spare the party” the trauma of booting him out of office. I don’t believe that. I think the Freedom Caucus had the votes to book (sic) him out of office –unless Democrats voted to support Boehner, which they would do. And then we would have a true political problem on our hands, an allegedly “Republican” speaker of the House owing his job entirely to Nancy Pelosi telling X number of Democrats to vote for Boehner.

A Speaker owing his position to the opposite party? Completely compromised — more so than he is now.

3. The current idea, favored by the same folks who thought that Boehner was such an Indispensable Man are now agitating to put his loyal (???) lieutenant Kevin McCarthy into the position. Kevin McCarthy is, if it’s possible, a worse RINO than Boehner, and was by Boehner’s side as he punished critics and dissidents for daring to represent their constituents’ interests.

Under no circumstances should the Freedom Caucus permit McCarthy, Scalise, or Cathy McMorris Rogers — all the Boehner Warriors who have brought GOP morale to all-time lows — to serve in any leadership position. A purge is a purge.Â

He’s right. Â The entire article is well worth a read.

The next Speaker must have study or already be familiar with the process that birthed ObamaCare — midnight votes on holidays, sessions involving only Democrats, bribes to Senators, changes in Senate Rules, Reconciliation, Presidential Executive Orders changing the already illegitimate legislation — and understand there is no such thing as “bipartisanship” with the current Democrat Party.

These are proto-facscists who believe the ends justifies the means. You do not “negotiate” with people who want to fundamentally change the United States by corrupting its legislative process.

It’s funny how this “freedom caucus” wants to take away a women’s right to choose. Freedom you say?

They should call it the “AM radio caucus”?

You make this thread about abortion? What is mentally wrong with you?

So the Boehner resignation has nothing to do with the attempt by a few to shut down the government to defund planned parenthood? Nothing at all to do with it?

Has your AM radio been working? Who is it that has allowed hate radio to suck their brains out their ears? You or me?

Oh, that’s right, I forgot that you never listen to hate radio.
Typical response by those who worship but deny hate radio.

Jeez, if it was that easy, they should have done this years ago. Clearly Boehner resigned because The Pope ‘got to him.’ Yes, it’s all the AM hate radio that is poisoning our youth, and impurifying our precious bodily fluids!

In most cases when you begin your argument with the word “so”, it means you are constructing a straw man argument. Please, feel free to have a discussion with yourself about what my positions are and are not.

2) Horsecrap. It would be refreshingly nice to see some true bipartisan support in any form of Congress. The Democrats aren’t the enemy. They’re just another party with different ideas.

3) Mark Levin is a legend in his own mind and to the people that eat up the red meat he tosses to them.

“Bipartisan” always means Republicans moving to what the Democrats want. Democrats never, ever, move to the right.

Weren’t you a Democrat? Didn’t you move to the right?

Yes, I was a democrat 25 years ago. What’s that got to do with what I said?

No, we weren’t. I was discussing all aspects of bipartsanship..

Uh, then no. Changing parties is not bipartisanship. Bipartisanship is that place when politicians of both parties back each other up to rob treasure and liberty from the taxpayer and/or citizen. It ‘used’ to be the place where politicians would set aside short-term political gain for longer term best interest of the nation. Fell out of vogue ’round the time of the 17th amendment.

They move to the right when they have to, purely political expedience and quickly glossed over. GOP compromise is ‘We lose, they win’

Yes, democrats are largely the enemy. GOP’ers can ACT like we’re not at war and continue to lose on the field, everywhere.

If Democrats are the enemy, why is The Dept. of Labor and Industry Commissioner Davenport change McDonnell policy to have violations to unlicensed contractors and the licensed contractor illegally conspiring in the delivery of contracting services to the Dept. of Commerce and DPOR.
McDonnell and Ken.Cucci had removed from contractor ” General information ” sheet ; You are required to ensure that all contractrors and trade related individuals that you hire hold the approiate license issued by DPOR.
Sarcasim here ; yea protest minimal numbers of childeren by being on a bridge , but don’t enforce Statutes 54.1-1100 and The VA Employment Compensation.
No wonder Trump says stupid politicians.
I say complicit , corrupt Republicans , to yell thief while being the thief. On this issue McAuliffe makes Ken C. a high school level elected official.

Exactly! Democrats are the enemy!

Then the Virginia Republicans must demand prosecutions of Licensed Building Contractors conspiring with unlicensed contractors { illegal aliens } in the delivery of contracting services { refer to prohibited Acts section of Statutes 54.1-1100 }. Gov. McAuliffe’s Employee Misclassification Task Force has the violations issued by The Dept. of Labor and Industry. http://watchdog.org/202012/subcontractors-shadow-economy-
In my opinion our previous Republican Administration contributed to the scale of the issue we now see in Virginia.
One ain’t no better { R or D }, just speak different.

I feel sorry for you.

Well, at least you feel something… That’s a start. Now if you could only redirect that energy into something productive.

Yes, perhaps the party leadership could sit and share a lemonade on the front porch swing — Good luck with getting Dems to put anything ahead of politics — it is not their nature. The democrats ARE the enemy, followed next in line by the GOPERINO enablers — AND, you can’t have bipartisan support unless you have differentiated partisans first.
Mark Levin is a popular author and talkshow host who has greater experience and following then you, me, and Jeanine. He’s still wrong on COS et al — but he’s right on a whole lot of other stuff. In the marketplace of ideas, folks are buying what he is selling.

The best thing about McCarthy might be that he’s not the brightest … and he has to understand that the same votes that were there to bounce Boehner are still there for him, too.