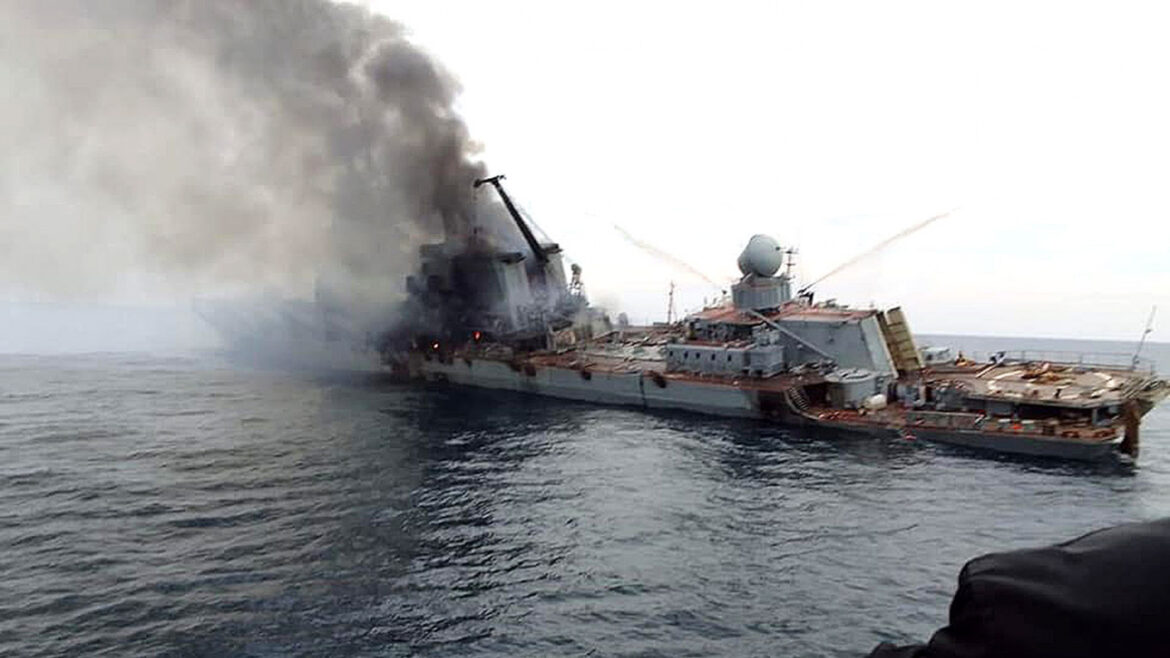 Believed to be among the first photos of sinking Russian ship Moskva (source: themoscowtimes.com)

The Moskva, Russia’s flag command warship in the Black Sea, has sunk.  The explanations associated with the events varied quite widely.  Russian news reported that a fire broke out in the ship’s magazine and the ammunition stored there exploded.  Russian news also reported that the majority of the Russian crew was safely evacuated but the ship was lost in stormy seas while being towed to port.    Ukrainian news reported that anti-ship missiles had struck the Moskva, penetrated the hull and magazine, and caused a massive explosion.  The latest news is that most of the Russian crew of 510 was killed in the blast.  There are a number of things of interest in this major maritime event:

First, how did the Russian warship survive even for a short time?  During WW-2, the German battleship, Bismark, instantaneously destroyed the British heavy cruise, Hood, when one of its shells hit the magazine.  Admittedly, there are more modern magazine designs to blunt a Hood type disaster, but still, a shell igniting a ship’s magazine is an explosive disaster. ( It is hard to imagine that the Moskva was able to be towed at all before it sank.)

Second, and of greater personal interest, the Ukrainians reportedly used drones to distract and confuse the Moskva sensor suite.  Surface skimming anti-ship missiles were fired under the cover of the drone providing sensory overload.  The missiles penetrated through the ship’s defensive perimeter.  (It is possible they weren’t even detected prior to impact.)

During the 1980s, I worked on various weapons and autonomous systems.  Even in those early years, it became obvious that drones would eventually play a major offensive attack role in war.  DARPA’s drone based Shark Pack, Hawk Pack, Wolf Pack and Mantis were designed to surveil large areas of a battlefield and destroy enemy targets,   These drone Packs were either fully autonomous with a predefined task or semi-autonomous where secure communications could be used to direct battlefield actions.

During Superbowl LI, Lady Gaga uses some 300 airborne drones.  Called “Shooting Stars”, these drones flashed, moved and grouped in unison based on a particular computer program.  It was at that point I realized drones had arrived and that the Terminator’s Skynet could certainly be real.

One final note:  Fleet Command warships are major symbols of a nation’s military might.  The sinking of the Moskva is not just the loss of a military asset but a major embarrassment to Russia in general.  It is incidents like this that change the nature of a war not just a battle.

As I wrote in my comment to your post a few days ago, it is the Ukraine that is doing the dirty deeds that they are accusing Russia of doing. See link below. This war is on Zelenskyy and Biden. Both severely miscalculated the Putin response to the US-Ukraine Charter on Strategic Partnership signed last November. Is the agreement and this war why Hunter Biden was being paid nearly $1 million per year by a Ukraine gas company when Brandon was VP? Are things like this why VP Harris isn’t getting along with Brandon? This is what Ukraine gets for electing a chicken shit comedian as their leader. Zelenskyy is no hero. The crooked media planted that BS in peoples minds. We are getting “it” too for what was elected in the US.

Are you being a girl or a boy today? 😂

Captain Bob Barr ran the surface ship survivability office that took anything that burned off Navy ships. Without his efforts, it is likely that the Stark would not have stayed afloat. In addition, those often maligned Beltway bandits immediately donated their talents to properly ballast the Stark after the damage. It was the best of collaboration.

“ took anything that burned off Navy ships”

Do you have a citation or context for this statement?

Last I checked they still have fuel, ordnance and hell, skivies and socks on board that readily burn.

Done, now I’m admittedly not the best googler out there but there is no “surface ship survivability office” referenced.
Officer
Training
Manual
Yep, but no office.

So again I ask, since when doesn’t fuel burn? Seems like a fairly simple question. Hell, you just had a ship burn at the dock for days in San Diego not long ago.

The Surface Ship Survivability Office existed in the 1980s. Don’t know if it exists today. Captain Bob Barr was a WW2 mustang having a Congressional appointment.

For fuel to burn, the conditions have to be appropriate. You can throw a match into a pool of gasoline and it won’t explode or burn. This used to be a demo in firefighting school. However, if gasoline is properly vaporized, you get explosion and fire.

Not trying to be obtuse, and thank you for the civil dialogue, but still not getting what you’re selling here. While I was an Airdale in the Navy (H-46 aircrew) and threw my fair of butts in avgas, I’m certainly not as well versed on this subject as you but, we just watched the Bonhomme Richard burn to the point of being scrapped while sitting at the dock.

The definition of “flammable” is: easily ignited so I guess you could split hairs on the word “easily” but something that burned was certainly on the BH.

It appears the BIDENITES solution to their massive failures is to go to war against Russia. They will do anything to distract from their administrative disasters.

Two comments: 1) Unlike the US Navy the Russan Navy places very little emphasis on damage control — we learned the hard way in WW II, Rember the USS Stark was hit by two Exocets in 1988 and lived to fight another day and 2) when you store major ordnance above decks unlike the USN which stows then in magazines it is a recipe for disaster, as you will notice in the photo it appears all her P-1000’s have cooked off — not a good thing !