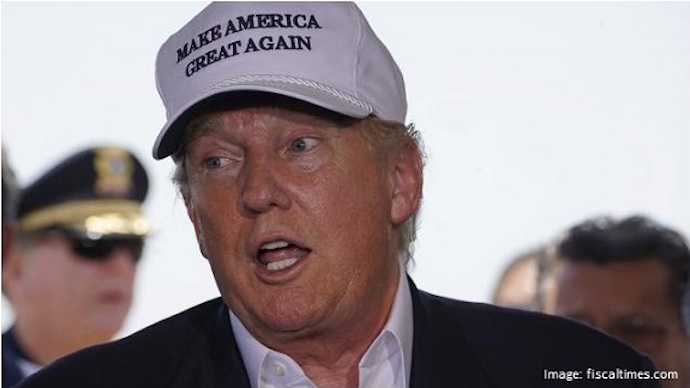 Mr. Trump, What Made America Great in the First Place?

By Richard A. Viguerie and Mark J. Fitzgibbons

Your campaign slogan, â€œMake America Great Again,â€ has populist appeal to those of us who are fed up with how the Washington establishment has turned its back on the American people and our ideals.

Your slogan, though, begs the question: What is it that made America great in the first place?

And, of course, what is it that will keep America free, secure, and prosperous for generations to come?

On Constitution Day of 2011, we published an e-book that provides the answer.

Americans are fed up with the political establishment and how it abuses and misuses the law, legal systems and public policy,â€ we wrote, and, â€œ[t]he anger at, and distrust of, the political class is setting records, and for good reason.â€

Does this sound familiar?

In our e-book, we describe the â€œvery foundation of American exceptionalism.Â  Without understanding that one critical concept, America is lost.â€

The foundation of American exceptionalism, or what made America great in the first place, is that our government was constituted through a written rule of law over government itself.Â  One of the Founders and our fourth Chief Justice of the Supreme Court, John Marshall, described it as â€œthe fundamental and paramount lawâ€ for America.

This written law over government is what distinguishes America from all other nations, because it not only grants the government its powers, but defines, separates, balances, limits, and regulates them as well.

This fundamental and paramount law creates a structure for government that is designed to best protect life, liberty, property, and our â€œpursuit of happiness.â€Â  Violations of that law threaten these fundamental rights, and weaken America.

We are a more peaceful and generous people than any other great power in history, yet we are able to muster the greatest resources in the fastest time to protect our security because of this law.

America has become a lesser nation in proportion to the violations and erosions of this law.

Our e-book is The Law That Governs Government: Reclaiming The Constitution From Usurpers And Societyâ€™s Biggest Lawbreaker.

The law that governs government, of course, is the Constitution.

The â€œusurpersâ€ are progressives such as Hillary Clinton, Barack Obama, and even many members of the GOP establishment.Â  Progressives in the GOP have even usurped the term â€œconservative.â€Â  Therefore, we who understand their lack of fidelity to the Constitution and who see that great law as the foundation of American exceptionalism call ourselves â€œconstitutional conservativesâ€ to help distinguish our views from theirs.

And who is societyâ€™s biggest lawbreaker?Â  That would be the government, which hundreds of times each day violates the Constitution, and violates other laws without consequences (like Hillary Clinton, Lois Lerner and the IRS, the Veterans Administration, the EPA, the National Labor Relations Board, and on and on).Â  Government even violates the very laws it enforces, like progressive state attorneys general who target free speech for investigation and prosecution.

Nearly anyone or any business that has had dealings with the government knows first-hand that government is not just a lawbreaker, but is arrogant and uncompromising about it.Â  Government officials know they face few or no consequences for their lawlessness, which has done great harm to American exceptionalism by intimidating free speech, religious freedom, and innovation.

The political class in government has also failed to protect our sovereignty and borders, while using foreign law that is inconsistent with and corrupts the Constitution.

By violating the law that governs government, these progressives in the political class have weakened America.Â  They have made America less exceptional.Â  They have put their interests over those of our country and their fellow Americans, using government to advance their power at the expense of the liberties that breed American exceptionalism.

In our schools that these progressive now control, the Constitution and the American values and principles it protects are mocked and ridiculed.Â  They teach our children that America is not exceptional.Â  But America would not be a prosperous and free nation without the Constitution.

The Law That Governs Government can be easily read on a short flight to one of your campaign stops — an hour is all you need — yet it explains why the Constitution is what made America great, the forces that have worked to reduce American exceptionalism by tearing down the constitutional rule of law over government, and how we can reclaim the Constitution and return to a great America.

The Constitution, you see, provides a remedy.Â  It is, as James Madison wrote in Federalist 44, a â€œremedy obtained from the people who can, by the election of more faithful representatives, annul the acts of the usurpers.â€

You, your staff, and your supporters donâ€™t even need to buy a copy — it can be downloaded for free at ReclaimTheConstitution.com.

America will be great again only when the law that governs government is restored.

Mr. Trump, what is your plan to follow and enforce the Constitution, how will you achieve that, and what assurance can you give to the American people that you understand and are committed to the Constitution?

Generally, your big-business friends are more concerned with having the government give them legal advantage over the competition than following the Constitution.Â  There is a saying, actually a truism: â€œPersonnel is policy.â€Â  What plans do you have to surround yourself with constitutional conservatives?

P.S. – We are so worried about our country, and believe so strongly in what our e-book can do, that people who download it may use portions of it for articles, speeches, and handouts even without attribution to the authors. Here is the Table of Contents to this Thomas Payne-style e-book, which can be downloaded for free at ReclaimTheConstitution.com:

Reclaiming The Constitution From The Scofflaw Political Establishment
A Century Of Progressivesâ€™ Misusing The Law To Violate The Constitution
A Law Governing Government For Our Posterity
Contempt For The Constitution As Law Is Endemic In The Political Class
Restating An Old Truth
Government Is The Biggest Lawbreaker
Government Lawbreaking Is Lucrative For Cronies
The Constitution Is Law, Not A Blueprint To Be Ignored
A Gradation Of Authorities
The Rightful Skepticism Of The Anti-Federalists
Why Now The Movement For The Law That Governs Government?
A Remedy Obtained From The People

Mr. Trump, What Made America Great in the First Place? was last modified: March 31st, 2016 by Guest Contributor Mark Fitzgibbons

Looking at the many hats being worn at Trump rallies on tv, I would have to guess the wearers of those particular colored hats have been defending the Constitution their entire lives. Your dishonor of those fellow republicans is a pretty strong statement of the current state of the GOP. Trump most likely isn’t the answer, but neither is any of the rest of what passes for either party leadership these days. Corporate United has seriously overplayed it’s hand this election. The citizens won’t forget.

Wow, a thoughtful article co-authored by an absolute legend in the American conservative movement and no responses from Trump supporters.

My guess is the main reason for that is neither Trump nor his supporters care anymore for Constitutional principles than Barack Obama — they just want stuff done, no matter what the Constitution says, whether it’s using eminent domain to seize private property for big business, closing mosques, stifling dissent with looser libel laws, squelching freedom of speech, and increasing government control of health care and education

The authors of this piece are correct — the Constitution and its principles made us great. We don’t need yet another president who has no respect for it.

He’s a legend….wow, must not have a deep bench these days.