Naming your baby, nine rules to follow and twenty names to avoid

How will your child fare with a strange name or a more common name with an unusual spelling?  This article answers those questions.  Don’t screw it up, you’re making someone live with that strange, perhaps unpronounceable,  impossible to spell name, for 100 years or so.  Why saddle your child with a name that they must ALWAYS spell?  Names that are cute for toddlers don’t always work when the child becomes an adult.   What happens when that little girl named Sparkle wants to be a doctor, or a physicist?  Or that boy named Rock or Ace hates sports and wants to be an interior designer?  Imagine a political candidate named Misty or Jaxxon.

According to this article common names are much less common than in years past.  Today’s parents want unique and unusual names, not names like these that have been the most popular over the years.  So far in 2013 the top girl name is Imogen and the top boy name is Asher.   Last year the top names were Charlotte and Finn.  (Finn as in Huckleberry Finn?)   That story here. 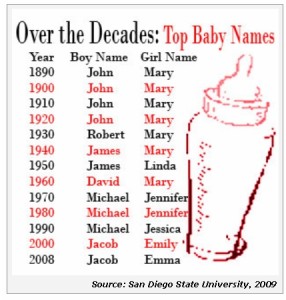 According to this article, choosing the wrong name for your child can have long lasting effects.  One in five parents regrets the name that they chose for their child, most often because of odd spellings.

Naming a baby is a huge responsibility, so exercise caution and do not use multiple e’s or punctuation in your child’s name.  Follow the nine rules!