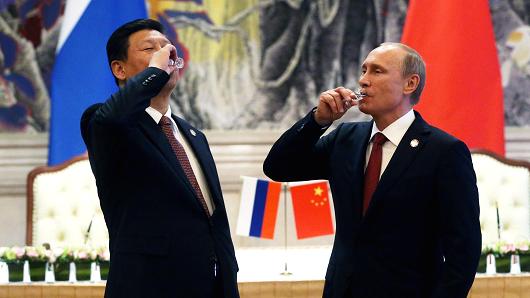 In what almost appears a scripted series of excuses for war with Russia, reminiscent pre-World War I Europe, NATO is now moving into an offensive posturing in Eastern Europe.

Britain said on Wednesday it will send fighter jets to Romania next year and the United States promised troops, tanks and artillery to Poland in NATO’s biggest military build-up on Russia’s borders since the Cold War.

Hillary Clinton’s “Russian Reset” has been a miserable failure and once again the world is bracing for yet another global war. World Wars seem to have some distinct advantages for the modern world. Minus a few exceptions all the nations of World War I and II are still in existence. All experience population relief in the wake of the war and a population boom shortly after. I do wonder, however, who will ally themselves with Russia?

The US wants binding commitments from Europe to fill four battle groups of 4,000 troops asÂ part of a new deterrent strategy that could be combined with missile defense, air patrols and defenses against cyberattack.

The battle groups will be backed by NATO’s 40,000-strong rapid-reaction force, and if need be, further follow-on forces, for any potential conflict, which could move into Baltic states and Poland on rotation.Â Deutsche Welle

Thankfully, when we begin looking at what’s actually happening on the ground, we truly are in the rhetoric stage of the great game of war. It appears we are trying to figure out who’s with whom and who’s got the money and the interest in protecting Europe from Russian “aggression”. While the West is weakened by high debt and immigration, our enemies seem to understand that there is little we can do to stop them if they misbehave a bit.

France, Denmark, Italy and other allies are expected to join the four battle groups led by the US, Germany, the UK and Canada to go to Poland, Lithuania, Estonia and Latvia, with forces ranging from armored infantry to drones.

The commitments would be “a clear demonstration of our transatlantic bond,” Stoltenberg said.Â Deutsche Welle

Eastern European countries simply do not have the ability to defend themselves militarily. If they feel threatened, they have no choice but to turn to their Western European allies and to America. Russia’s interest in Eastern Europe seems hesitant, but real; and if we’re going to do this dance in Eastern Europe as NATO allied forces, then we better have a very clear understanding of where this all will end; and it probably won’t end in war. At least, not yet.

In truth, Russia and China will continue throwing their weight around sporadically, because they know that little will be done to stop them. There is no such will to fight a world war amongst the peoples of The West as there was in Europe before the first World War. Unless Western governments can figure out a way to get their war weary nations excited about the idea of going to war with Russia and China, I don’t see much worse than a decade of posturing and rhetoric ahead of us.

Still, there is always reason to be concerned when the West and the East move into such close proximity to one another militarily and it is clear that Russia and China have lost respect for Western dominance.

They’re just trying to run up the bill before President Trump gives them their tab.