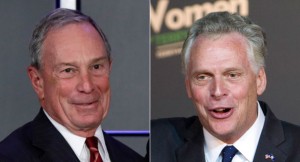 Leader of the national gun-grabber movement, NY Mayor Michael Bloomberg, has indicated he will be directing the buy of $1.1 million in TV ads for Terry McAuliffe in the final two weeks of the campaign.

Though these ads are ostensibly “for” McAuliffe, we all know that actually means “against Cuccinelli.” The stakes are pretty high for the gun grabbers.

McAuliffe is unapologetic about his support for stricter gun laws, including an assault weapons ban, universal background checks, limiting the size of magazines and preventing people from buying more than one gun a month. He would unquestionably be a close Bloomberg ally should he win.

I really hope that this non-stop stream of hysterical screeching about Ken Cuccinelli’s “extremism” starts to have a backfire effect. But in any case, if you care about your Constitutional rights, don’t listen to the polls. Don’t listen to the relentless anti-liberty spin. Just get off your butts and get our folks to their polling places.