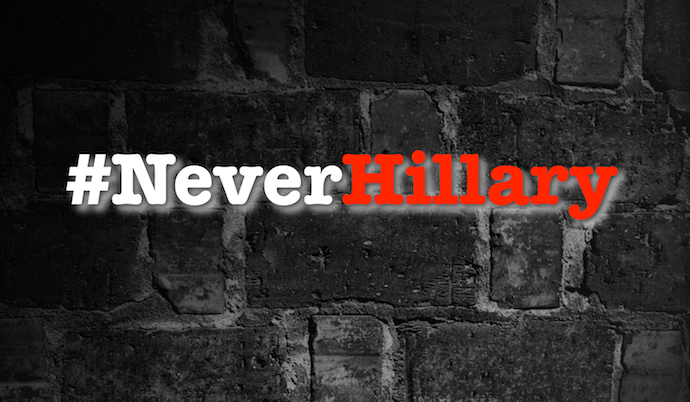 Ted Cruz supporters, you can move along if you’d like. Your candidate still has a path to victory.

A far less emotional and much more sobering critique of Trump than I’ve seen from anywhere else is contained here in an article written by Victor Davis Hanson for National Review. Check it out.

Those of you touting #NeverTrump now would do well to remember that, as bad as you see him, we have worse now, have had worse in the past, and may have worse in the future.

Trump is probably not the knight in shining armor that his most ardent supports believe him to be, but neither is he the dragon storming the castle that many of his detractors believe him to be. If he is indeed the nominee like I believe he will be, then #AtLeastHesNotHillary is something you ought to consider. At worst, I’d say, better a wild card than someone who will willfully destroy the country. Besides, there’s no talk of him being indicted any time soon or having potentially been involved in a murder, a rape cover up, a Benghazi, or any of the things that hang around Hillary’s neck, rumor or otherwise.

I’ll pause for a minute to give a personal anecdote about Hillary that may explain my complete distaste for her beyond the obvious policy disagreements, and her obvious history of corruption. Originally from New York, I am sad to say she was my Senator for a while. When I was young, I had the privilege of participating in a weeklong Presidential Classroom program in Washington, DC. Unfortunately for me, I broke my ankle in a game of basketball the week before and had to attend Presidential Classroom on crutches.

One of our sessions included a tour of the Capitol. Congress was in session. We had just exited the tram that goes between the Capitol and the other Congressional office buildings. We had left one of the Senate office buildings and were making our way around the Capitol for the tour when I encountered then-Senator Hillary Clinton and her entourage. (As an aside, my group had ridden the tram over by happenstance with Senator Mary Landrieu and a Republican Senator whose name I’ve forgotten. We had a very nice conversation with those two Senators and they were very genial. They were on their way over to the Capitol for a vote.)

My encounter with Senator Clinton and her staff was not a pleasant one. She too was on her way to vote. On crutches and moving slower than normal, I had the misfortune to find myself trailing behind my group and wound up partially blocking the path that Hillary and her staff were walking in. Now, if you’ve ever been in that part of the Capitol you’d know that path I happened to be occupying was tremendously large and they could have very easily altered their trajectory in order to avoid the overweight young man on crutches. Instead, as they drew near, I saw Hillary say something to a male member of her staff and he moved towards me. As I tried in vain to avoid their path, he briskly trotted up to me and shoved me out of the way. I lost my balance and was knocked to the ground. Maybe they thought the young man on crutches was a threat or maybe they were always rough with people who happened to be in the path the Senator wanted to be.

One of the girls in my group saw this, ran to me, helped me up, and shouted something in their direction as she did so. Maybe they didn’t hear her and maybe they did, but regardless, Senator Clinton and her entourage were quickly out of sight. The staffer could have asked me to move out of the way or even stayed with me while I passed if they deemed my crutches as a potential threat. Truth be told, I was massively overweight, in a cast, and couldn’t move well on the crutches. I was obviously no threat. There was no thought given to me as I was on the ground by her or any member of her entourage. I only wish cameras had captured the incident. The Presidential Classroom staffer in charge of our group was very gracious and apologetic to me after the girl and I caught up with the group. When I got back home I wrote a letter to her office about the incident but never heard anything back. You can see why I have a personal dislike for her.

As for Trump, you might find his words and campaign antics to be disturbing in a potential President but that would have more credence to me if you found them to be wrong and offensive in general. How many of you root for Frank Underwood in House of Cards? How many of you root for the bad guy in the movies? How many of you laugh with and enjoy a comedian who says far more offensive things in their act? How many of you defend another public figure when they’ve clearly done illegal or immoral things? How many of you blindly stand with a politician like Bob McDonnell? While he may have not truly done anything illegal, he’s done obviously unethical and stupid things, never mind that he did nothing while similar things were being done around him. You may say that none of that is acceptable in a President, but just by accepting that in other areas you’ve shown a hypocrisy, however small.

Also, truth be told, I think those of you who consider yourselves to be intellectually superior to him would do well to remember that he is a billionaire and you are not. He is far smarter than you give him credit for. He is smarter than his opponents gave him credit for and look at where he and they are now. The way he has charted his campaign is nothing short of genius, especially if one considers the lack of political savvy he surrounds himself with.

Frankly, if nominated, I suspect he’ll surprise you with how deftly he’ll navigate the waters of a General Election and, if elected, the Presidency. If you want to take a moral tone of superiority against him, I’d suggest you truly consider what all the others have done and have been in their lives to become President. We are all hypocrites with who we’ve supported for office before and I would venture to say that we will be again, whether if it’s for the Presidency or local school board. Politics is a strange and nasty business. In 2016, we all know how the sausage is made. (For now, I’ll excuse the Cruz people. Your guy is right on just about all the issues, and like I said, still has a path to victory, but we’ll talk again after the nomination.)

Should we mourn that we will never see a Reagan again? Yes, because the world is more than slouching towards Gomorrah. The American public would rather Keep Up with the Kardashians than read the Constitution. Our conservative heroes today tend to be astroturfed internet, 24 hour news cycle, and YouTube stars; not the giants of an age where in order to get credence and attention, you really had to have substance. (Also it is nowhere near a fair comparison, but Reagan was hated by the elites of both parties at various points in time.)

The Buckleys, Scalias, and Reagans are sadly gone. They’ve been replaced with Meghan McCains, Rand Pauls, and Donald Trumps. But those men were giants, and their sheer stature dwarfed their contemporaries, their predecessors, and successors. If you want to assign blame for that, start with at least briefly consulting a mirror and then look at our society at large. Our society doesn’t produce those people any more.

If you want to debate or shoot holes in Trump, I’m not interested at this juncture. In terms of the nomination, you should have taken him seriously early on. His issues are public and transparent. His remaining competitors in the GOP have them too, they just are not as out in the open. There wasn’t a candidate in this cycle or in the last twenty years that a thinking person couldn’t shoot holes through. Elections by their very nature are compromise. The ideal person to hold elected office never runs for it.

If you want to continue to fight Trump by supporting Cruz or even Kasich, that is your right as an American and I respect you for it, if your principles are what guide you to that. If you are a member of the Establishment or a political hack that is scheming for ways to stop Trump in order to hold on to power or money, then you have my outright denunciation.

When the nomination is done and if Trump is left standing, you are either standing with your him or you will stand with Hillary. If Cruz somehow beats Trump, the same rule applies to him and you will see me admonish former Trump supporters and the Establishment in the same manner.

It is a miracle we are still limping along after eight years of Obama. Four to eight years of Hillary will leave us in worse shape. Remember, Hillary is an Alinskyite and is obsessed with leaving a society-changing liberal legacy. After eight years of Obama, she now has to outdo him. She has a higher (or lower, depending on your perspective) bar of liberal activism to shoot for than she did when she was running in 2008. She will be worse for the country than he was. Trump will do better than Hillary regardless of what he does. If Trump does not do right and governs like a Boehner or a McConnell if he’s elected President, many of those supporting him now will turn on him and we will primary him in 2020.

I’m in agreement with a couple of posters except for this difference.
Never Hillary, Never Kasich, and Never any other hack the elitist swine try to shove down the people’s throats, like Romney.

“When the nomination is done and if Trump is left standing, you are either standing with your him or you will stand with Hillary.”

Nope. I don’t have to stand with either, any more than I’d have to choose to stand with Stalin or Hitler, or Castro or Batista, or Miley Cyrus or Kim Kardashian.

Neither a Trump or Clinton presidency will be a positive for America. Both are fundamentally evil and twisted — not merely imperfect or flawed — humans. Both will bring calamity. I don’t have to choose whether to poison my horse or shoot it. I will choose not to stand with evil, and in the meantime work for good.

At this point, Trump is the only reason I’d casting a ballot FOR a candidate and not against hillary.