The New Normal of Poverty?

“Have I not wept for those in trouble? Has not my soul grieved for the poor?” Job 30:25

Words and data points can hardly describe the economic catastrophe that has ground across the nation over the last six years. The shadow cast by the record high Dow Jones Average obscures both the reality of our economic predicament, and the edgy desperation of many middle income Americans as the new poverty begins to blend into the old poverty.

Yet, if you listen to the “uniparty” ruling class in Washington, you’d never guess there was a problem. Our detached and diffident President, a man with more issues than the Chicago phone book, parades endlessly around the country claiming that the economy he “inherited” – what president didn’t inherit an economy? – “is on the mend.” Both sides in our Congress, never too eager for heavy lifting anyway, are very busy trying to figure out how to get a football team to change its name, and how to confer citizenship on people whose first official act in America was to break the law. With so much to do, there isn’t much time left for a pesky economic crisis, or the millions of families being dragged down with it. 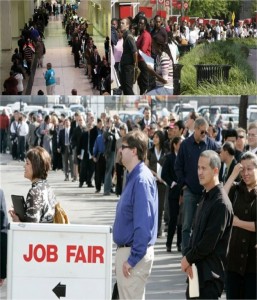 Meanwhile, a human tragedy is ongoing. The numbers spell out the grim truth that somehow gets missed in the national news media. This past week we learned that in the last decade the net worth of the average American family has decreased by 36%, dropping from $87,000 to $56,000. Middle income Americans have seen their wages fall over 3% and private bank studies show a steeper drop in after-tax income, especially in the lowest paid 20 per cent of the population. At the same time, the raw cost of keeping a family fed, and the price of gasoline and household energy has skyrocketed. Lurking just around the corner is the full brunt of Obamacare coming in 2015.

It should be no surprise why the housing market hasn’t recovered, and why are more small businesses going belly-up than are starting up.

But the cruelest statistics are those that shed a light on existing poverty, and the new poverty that is growing like Kudzu in Georgia. The poverty rate is now sitting at over 15% of the population, which means over 50 million Americans are living under the poverty line. For children, the rate is over 22% with over 16 million children living in poverty – and 50% of the students in public schools now get free or subsidized meals. Over 50 million families are receiving food stamps. (The rates for African-Americans and Hispanic Americans are much higher.)

What is startling is that none of these numbers include the population who are kept just over the poverty line by Social Security, disability payments (at record levels, with nearly 5% of the working age population now on disability), extended unemployment insurance and various tax transfer payments. Several recent studies conclude that in the new economy, four out of five adults in the U.S. will struggle with joblessness, near-poverty or use welfare for at least some period in their working life.

With all of this as backdrop you’d think that the radical left that constitutes the present day Democrat Party, and the radical dilettante who stops in at The White House between campaign speeches and golf, would be beating their chests about the state of the poor in America. You’d be wrong.

Actually, the radical left pretty much ignores the poor except as election cycle props, or when they have the opportunity to suggest that the poor remain poor because of those wretched, hateful Republicans. Then they trot out the obligatory demands that the rich, greedy 1% percent “pay their share of the taxes,” while blithely ignoring the fact that the top 1% of income earners already pay nearly 40% of the total taxes collected, and the almost-as-evil top 25% of wage earners pay 86% of all taxes!

Likewise, and not to be outdone, the radical factions within the Catholic Church and a gaggle of old Marxists, socialists and the “social justice” crowd, who now evidently call themselves”progressive evangelicals,” are banging their pans again, demanding that you spend more on the poor, and that your taxes be raised to do so – proving the assertion that Economics 101 should be a required prerequisite to enter seminary.

But the dirty little secret is that if the poor didn’t exist the extreme left would have to create them, because the maintenance and expansion of the gargantuan welfare state is big, big business. Since 1964, $15 Trillion – or $150,000 Billion dollars! – has been poured into the welfare state. It hasn’t done much, of course, but it has had two huge achievements – neither good.

First, the poverty industry employs a enormous army of welfare workers in non-profits, for–profits, corporations, academia, the bureaucracy, and politicians, all of whom feast on the mountain of money provided by taxpaying Americans. No one even really knows how big that pile of money is, since the figures themselves are subject to the definition of what is or isn’t welfare assistance. But it seems clear that the states and federal government are spending approximately $1 Trillion a year on core welfare programs, and its headed north, up nearly 20% in the last five years.

How much gets to the poor though? Several studies have determined that over $60,000 per year is spent for every welfare family in the country, but that too is based on a definition. What is apparent is that the welfare industry itself, consumes the vast majority of spending.

The second major achievement of the welfare state is that since 1964 we have witnessed the utter devastation of the inner cities, and the “poor” are far worse for the War on Poverty. The evidence is overwhelming; the near complete collapse of the family unit, massive out of wedlock birth rates, third world schools with staggering dropout rates, out of control crime, and the various social breakdowns that can be directly traced to the poverty industry and the unintended, we presume, economic and spiritual dislocations it has caused.

Where are the Republicans in all of this, and why aren’t they looking out for main street America’s interests? Why aren’t they taking this issue into the public marketplace and confronting one of the most serious issues threatening the health of the country? There is no single answer; but certainly part of the problem is that the party is largely “tone deaf.”

For inexplicable reasons, Republicans seem genetically unable to hit a political softball thrown right over home plate. Time and again, incredibly serious and disastrous issues are ignored – or made worse – by political passivity.

Perhaps the truth is that far too many national Republican politicians simply don’t have well defined core convictions or beliefs, and simply want to be the guy or gal, just like the Democrats, who control the money spigot to the kingdom. Perhaps that is too cynical, but there is more evidence to support that theory of Republican impotence than any other.

The tragedy is that millions of Americans have had their lives upended in this needless disaster of an economy, and millions more face the same nightmare, if Washington continues on the current path without real leadership.

Fighting poverty and creating wealth in any economy starts and ends with jobs. With an unemployment and underemployment rate consistently pushing 15% or higher, there is no way to turn the larger economy around in the U.S. until some grownups show up on the scene. The best welfare plan has always been, and remains, employment and economic prosperity.

The fixes aren’t even particularly hard. Our corporate tax rate is the highest in the industrialized world at 39%, and foreign earnings are double-taxed, unlike other major economies. The former has been part of the reason 55,000 factories have left the U.S. over the past decade and the latter has forced corporations to park several trillion dollars overseas that could be used for capital investments and expansion here at home. In addition, many of our trade agreements are more one-way than two-way in actual application, and too often American goods and services aren’t allowed into our trading partners markets except with great difficulty – such as in China.

Large cuts in the corporate tax rate and the corresponding elimination of non-capital expenditure write-offs in the tax code, removing the double-taxation from foreign earnings, and getting tough with trading partners who consistently cheat would be a huge and immediate first step to reclaiming our economic power and creating jobs. It would be good for America for a change.

The vast majority of small businesses in America are sole proprietorships that pay taxes as individual income. Increasing personal tax rates under Obama have had major adverse implications for this group of businesses and it is the primary reason – along with the blade of Obamacare hanging over the entire economy – why small businesses aren’t hiring and are actually closing up faster than new small businesses are being formed.

The nation desperately needs a simple flat tax, or at least a stepped flat tax with minimal deductions, which would have the added benefit of eliminating the IRS, or at least reducing it substantially.

Finally, fighting poverty should be a shared national goal – both public and private. No one wants hungry families or hungry kids. Most reasonable folks are agreeable to a “safety net” for welfare that directs immediate help to those who can’t help themselves. But most reasonable folks also know when they are being scammed, and that being on the public dole is a long-term tragedy for the poor and taxpayers. It encourages the worst tendencies of both the recipient and the giver.

A serious plan to fight Obama’s poverty disaster starts with getting rid of Obama and his socialist cohorts, of course. But if serious conservatives really want to “take America back,” and dismantle the overreach and waste of Washington, they will demand with their money and their votes that Republicans turn their complete attention to rapid economic fixes to our economy, instead of trying to import more cheap labor for the Chamber of Commerce crowd.

The Republican focus should be on clear, simple and straightforward policies that can drag the general economy back from the edge by creating jobs. There is no more critical agenda for Republicans right now than demonstrating in word and deed that bringing the American economy back is the number one priority for a new Congress.

Socialism is a historic failure that only creates more poverty and corruption, and is antithetical to our Judeo-Christian ethic. Most of our fellow citizens already know this – they can do the hard work of restoring the American dream. They’re just waiting for someone in Washington to wake up and join them.