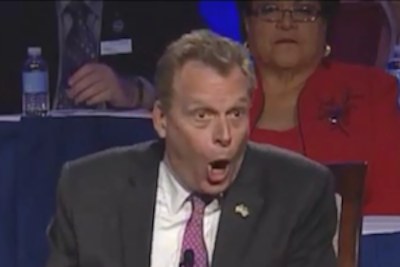 A new poll out by Quinnipiac University shows Ken Cuccinelli and Terry McAuliffe running neck-and-neck, with McAuliffe’s slight 44% to 41% lead within the poll’s margin of error.

This represents a significant tightening of the race, which had seen large gains by McAuliffe after a summertime run of millions in negative campaign ads.

This news will undoubtedly be a boost to Cuccinelli’s fundraising at a crucial juncture, and comes on the heels of other news that has helped reinvigorate the GOP base, including some key endorsements and reports that Ken is free to be himself again.

As Shaun at Bearing Drift said, it seems McAuliffe peaked too soon.