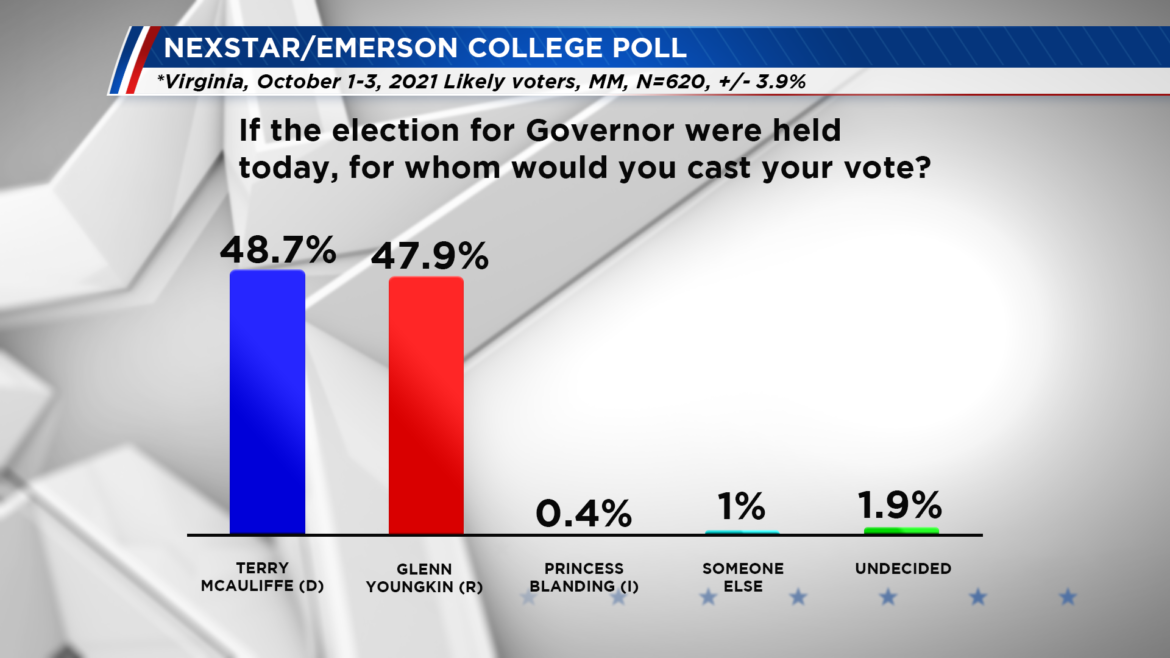 In the race for Attorney General, Republican Jason Miyares has closed the gap between him and his opponent to less than 2%, solidly in the margin of error.

More from the poll:

President Biden’s approval is underwater in the state he won by ten points in 2020, as he sits at 45% approval and 48% disapproval, with 8% neutral. When respondents were asked if Biden’s endorsement of McAuliffe made them more or less likely to support his candidacy, 22% said more likely, 39% said less likely, and 38% said it had no difference.

It’s not surprising that Biden is underwater in Virginia, as he is in nearly every poll nationwide. In the latest poll, Quinnipiac, he is down by 13% disapproval over approval, with the majority saying the Biden administration is incompetent. Biden is proving to be a terrible President. That will help Republicans a great deal, this year and next. We can win in Virginia this year and take back the House and the Senate next year.

Our candidates need to focus on tying Democrat candidates to Biden like an anchor. McAuliffe is fully aware that Biden can sink him, as evidenced here. Republican candidates are moving ahead at just the right time and I expect in the coming days to see polls showing us in the lead across the commonwealth. In the meantime, Republicans need to continue to head to the polls to vote early. We can win this but we need every vote, don’t chance it, VOTE NOW!

New poll shows McAuliffe and Youngkin in a dead heat as are Miyares and Herring was last modified: October 6th, 2021 by Jeanine Martin

And CNU out today McAuliffe up by 4 in likely voters. So there you go…

Headlines and excerpts from TBE archives:

“All three statewide races are tied” 11/4/2017
“Rasmussen poll–Gillespie and Northum tied” 11/3/2017
“The bottom line, the race is too close to call with the vast majority of polls within the margin of error.” Jeanine – 9/25/2017
“Gillespie moves ahead in Monmouth poll” 10/17/2017
“Hampton poll: Gillespie up by 8%” 10/25/2017 – Jeanine wrote here: “The latest poll from Hampton University Center for Public Policy shows Ed Gillespie up by 8%, 41 to 33% with 27% still undecided. We can expect the majority of those undecided voters to break for Gillespie, and not the Lt Governor incumbent.”
“The flaw in the CNU poll” 10/27/2017
“The big flaw can be seen in the poll’s demographics. 69% of the people polled had a college degree or better. The US census tells only 36.3% of the population of Virgina has a college degree or higher. This is why all the polls were wrong about Trump. Pollsters like to over poll the highly educated. CNU has just done the same thing, making this poll less than valid.” – Note the CNU poll which had Northan up by 7 ended up being within 2 points of the final vote…
“Ed Has the Energy, Democrats Sense Northam is in Huge Trouble” – 10/30/2017
“The Richmond Times-Dispatch makes it three for three” 10/30/2017 – Jeanine -wrote: “The Richmond Times-Dispatch has endorsed all three of our Republican candidates for statewide office.”
“Progressive group pulls support for Northam” – 11/3/2017
Chris Beer piece: 11/2/2017 – “It has born fruit in the polls and he (Gillespie) has either closed the gap or even taken the lead, depending on whom you believe.”
John Fredericks piece: 11/6/2017 – Predictions – “Ed Gillespie over Ralph Northam” “Jill Vogel over Justin Fairfax” “John Adams over Mark Herring”

This is an interesting thought from Ken Reid’s piece on 9/20/2017 entitled: ” Governor’s race could come down to libertarian spoiler”… (it didn’t, btw)…

“No Republicans have won statewide races since the McDonnell-Bolling-Cuccinelli election in 2009. That year, Bob McDonnell and Bill Bolling not only won Prince William and Loudoun counties – necessary for any GOP candidate to win statewide…”
Probably true, eh Ken…

Eric… yeah you are right about the history and trajectory of the state in general. But these are not normal times. Youngkin has run a much smarter race than usual. Will he lose? Yeah probably.. See my bet offer to you. Within 2 points and you hail me as the king! Over 2 points for Terry McClinton Rat and I will do the same for you.
Let’s have some fun with this Eric… In the end we are screwed in this stupid country anyway. If CONservative Inc. wins or the Billionaire Club Dems win… doesn’t matter.

Eric… one addendum… You and I are old men. We will probably see this country still circle the toilet bowl as we depart it… the young get to drop into the bowl…. I feel sorry for the woke little hipsters… waving their LGBGT banners and discussing critical race as the debt bomb left by your generation explodes on them…plus the economic policies of sending manufacturing to China! You can only play so many money games Eric to keep this thing afloat… those games run out on them…
They’ll always have their useless Liberal Art Degrees to make them feel better though…

“But these are not normal times.”

These are VERY normal times. Nothing new here in the slightest – which is the point of my previous comment.

As to your wager, you only get a (brief) “Wow! Congrats!” from me if you win. One vote margin is good enough for me. Nothing else matters or counts.

Eric… no in this state you have to spot me points. And you keep touting 3 to 9 percent. So That has to be the margin of victory for Terry Clinton Rat.
Normal times? You are kidding right? World transport is clogged. China is running out of coal. As Bloomberg pointed out US coal mines are offering 100 K. Europe is running out of oil. And gas.
So Biden is releasing the oil reserves because he will have another disaster if there are lines at gas stations. You want your rainbow powered green world ERic? If there are lines at gas stations like Europe.. his Presidency is finished. And you are finished in the midterms. Or if gas prices hit over 4 bucks.

WOW! It looks like you spend more time on TBE than I do! Oh well. Everyone needs a hobby.

“WOW! It looks like you spend more time on TBE than I do!”

I suspect I do, Jeanine!! I like to think of the hobby as Train Wreck Spotting…

Eric… train wreck spotting… you need to watch Biden then.

Here’s an irony that I was mentioning to my man Eric… Remember how Terry the Clinton Rat was figuring to use the strategy of pining Youngkin with Trump? Well… as mentioned below Dopey Joe is now underwater in Left wing polls and sinking.
That 38 percent in Quinippac despite their best efforts to prop him up? Holy Cow…
Sow Terry now has to run from Biden… which deflates his effort to use Trump because you then have the comparison going on… if Biden were soaring in the polls he could use Trump… now it is harder.

Christmas comes in November this year.

Just amazing that McAuliffe could get anywhere near even 40%. Is it ignorance or societal suicide that drives his numbers?

Eric… did you see where Biden is talking about releasing strategic oil reserves? We don’t need no stinking oil do we? With the coming energy crisis that the world is in, thanks to covid and idiot governments who think rainbows are going to power their new green world… when gas hits 5,00 a gallon in Vriginia… more or less with all your new gas taxes… Your politicians are going to be very popular. Add to the reality of spending and QE games… the average person will be in love with Democrats!
Hey if you still want a job as you are always telling me about how much you great educated liberals make (and you do if you can suck off the federal tit in Lowdown county) Bloomberg says coal mines are paying 100 K now because of the lack of miners.
Hard job Eric… I know because my family did it, unlike that schmuck phony in the WH…

Stoner, you clearly don’t have a clue on how the strategic oil reserves work. You fill them when crude is cheap and release them when it spikes to temper the lows and highs of the crude price cycles. He is doing the right thing if he is releasing some oil from the reserves. Read up before you post, bucko!!

Did you work for Exxon Mobil Eric? Thank you for the lesson. Except… your statement is in normal times. Right now people in Britain are lining up for hours for gas. He is releasing them to ease price issues with inflration going wild on every front.

And they are called suppression polls and Democrats run them every year and, on cue, the polls start to tighten a month out as we get closer to the political Day of Judgement.

Hey Eric… Terry Rat is going to have to run away from Biden. His numbers are now down to 38 percent approval in LEFT wing polls… not Rasmussen… Quinnipac Eric… Left of Left and they are skewed toward happy leftist poll time..

I dunno Eric… maybe Terry Rat is in trouble…but as you are correct if you get out the Swamp vote you win…But there might not be all that much enthusiams in the black vote you need in Tidewater and Richmond…. It might be much closer than your nine points… I am sure of that part.

Let’s bet son… If the election comes out within say 2 percent… You have to say Stoner is the God King of TBE.. I will do the same if it is more than that…