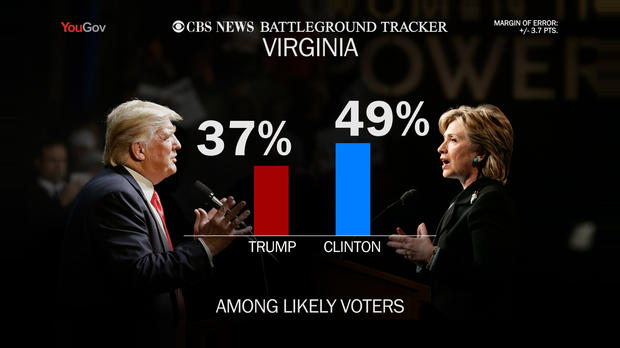 It’s looking bleak for Donald Trump in Virginia, according to the latest CBS/YouGov poll but things are looking up for Trump in Arizona and Nevada.

Polling results in Virginia show Clinton up 12%, with 49% of the vote to Trumps 37%, Johnson at 7%, someone else at 2% and undecided at 5%. Â (I am assuming this means Jill Stein is not on the ballot in Virginia.) When Trump voters were asked if there was any chance they would change their minds and vote for Hillary, 84% said they would never vote for Hillary. Â When the same question was asked of Hillary voters, 83% of them said they would never vote for Trump. Terrorism and health care were the most important issues to Virginians, 74% and 70% respectively. Only 28% of Virginians said Hillary’s choice of Kaine made them more likely to support the ticket. Â Only 33% of voters believe Hillary tells the truth and Trump’s numbers were only slightly better at 39%. Â All of the Virginia results here.Â

In the average of polls in Virginia Clinton is up by 6.8.Â

Do the math!
All three samples are lop-sided (check out question 22 or 23 in the survey backup
links). If you take out the independents and leaners, the ratio of Dems to Republicans IN THE SAMPLE dictates the results.

In the VA sample there are many more Dems than Republicans — about 16% more. Since Hillary only shows a 14% advantage over Trump, she actually loses by a little.

In the NV sample (same calculation) there are 19% more Dems than Republicans. Hillary ekes out a 2% lead, so she is actually losing big time. Republicans outpolled Dems in the 2014 election and even Romney in 2012 won 40%, but only 27% of the sample here are Republicans (adding in leaners only gets to 36%).

In the AZ sample there are 6% more Republicans than Dems, and this is consistent with the party registration, so Trump’s 2% lead turns into a small loss.

There may be 6% more Republicans in Arizona, but 19% more Dems in Nevada
— not likely. And in Virginia the difference is about 1% not 16%.

50,000 People Polled in 50 States – Trump Won!
Here is what a Real Poll looks like in America. Please take the Time to Read.. A Total of 50,000 people Polled in 50 States….
PG Farnsworth We have just completed our own poll since we cannot get factual information from the mainstream media!! We called 1000 homes in each of the 50 states and asked basic questions on the economy, terrorism, immigration and presidential pick.
Economy was the number one factor that Americans are concerned about and terrorism was number two.
Presidential pick was Trump by a large percentage.
Trump 33478 votes 67%
Clinton 9788 Votes 19%
Undecided or other 6739 votes 13%

My friends and I are all Graduate students from all walks of life we meet to discuss stuff. 13 people who like and have served in the Military. It took us most of two weeks to be sure our calls were to all people and not just one party or an other we called Americans.. our poll is by taking registered voter lists and we accumulated 33% repub, 33% dems and 34% ind.. our poll consisted of 1000 calls per state. all 50 states. 50,000 people are in this poll not the 100 like other polls.

I bet very rarely. 14 months ago could have bet $30 on Trump for the win with the British bookies for a $4500 return. Want to match that ??
Actually thought first question would be what poll this was. It is a ALIPAC poll by the way.

Stop with these silly links. Consider this a warning.

Trump rally 5,000 people
Clinton rally 100 people, all of which are staff and media

I disagree. I follow progressive emails and sites…they are scared to death…all the way down ticket

That’s because the DNC/Clintons and their media partners managed to piss off the independents. Many who didn’t plan to vote are now in the game because of those pesky Wikileaks emails describing the party collusion. Most Americans don’t appreciate Mugabe type politics.

And those pesky emails just got one of our spys hanged in Iran. And people are scared of Tump? What idiots!!!

Clinton can only pull a hundred people to a rally. Many are being canceled because no one will show up. But thousands will show up for Trump..
Trump 2016

It is almost impossible to get “real” pictures from Clinton rallies. What you see on MSM is fake just like their polls. Notice how they will never do crowd scans. This has a real picture of the 300 people who showed up for a Clinton rally..

How many are from Craigslist?

There is a surprising lack of confidence on the left and in the MSM. I’d say its borderline panic, there’s gotta be something to that.

I love when I see a poll that says 100% of the people are going to vote. No one ever says they are staying home. That’s probably because if a person says they aren’t planning to vote, they get a quick Thank You and a hang up. No sense polling someone if they aren’t voting.

But shouldn’t their response have gone down into the “stay at home” column? Or maybe a follow on question like “Why aren’t you going to vote?” would be appropriate?

What if it took 2000 calls to generate 10 “I am definitely voting” responses?

Shouldn’t the pollsters be interested in a budding revolution in the future? Or are they just interested in perpetuating a myth of democratic process?

Thank you! I had the same thought since I know so many people who won’t be voting this year.

Ah, Trump is two years older than Hillary. I have no idea what a gyno squad is, nor do I want to. You’re not right. Not right at all.

There is a big question right now about whether Hillary is healthy enough to make it through the campaign. Apparently it stems from a camera catching multiple aids helping Hillary up some stairs.

Hasn’t it been known for years that she’s no athlete and rather clumsy? Perhaps she stumbled on the steps, as has happened to many people, and her aides grabbed her to help. Sorry, it just doesn’t seem like a huge deal.

Actually the photos were from 8 months ago but I found the way drudge handles it to be quite amusing.