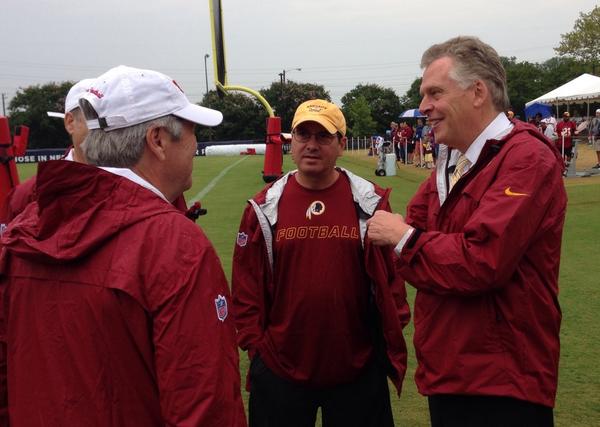 New Redskin Stadium Likely to be in Loudoun

If Governor McAuliffe has his way and the new Redskin stadium comes to Virginia, it is likely the stadium will be built near Dulles airport.  It’s the only place on a subway line with enough land for a stadium.  A downside to a stadium is the roar of airplanes competing with the roar of the fans.

A new stadium in Virginia would almost certainly be built in Loudoun, according to a panel of top local elected officials at a Northern Virginia “summit” last week.

Leaders of Fairfax, Prince William and Arlington counties and the city of Alexandria were unanimous in saying at the event Wednesday that they wouldn’t want the team in their own jurisdictions.

Locating a new stadium in Loudoun will not be without opposition,

“I think there would be as much skepticism as a welcoming attitude, and I think that would be built around the traffic issue,” said Tony Howard, president of the Loudoun Chamber of Commerce. He favored studying the idea, partly because a stadium “would be outstandingly beneficial” for Loudoun’s reputation…..

“If it’s Loudoun, if I were a betting man, then I would say there’s no other option than the Loudoun Gateway station area (at Dulles),” said Howard, the chamber of commerce head.

Any location in Virginia will be met with opposition from fans in Maryland and DC. Team owner Daniel Snyder seems to want the three jurisdictions, Maryland, DC, and Virginia to compete against each other for the stadium and practice fields.  Snyder lives in Potomac MD on the river.  Will that make a difference in where the Redskins relocate?

New Redskin Stadium Likely to be in Loudoun was last modified: September 5th, 2016 by Jeanine Martin

I have not been following this issue. What is wrong with the current stadium?

Please, please put it in Loudoun. With no capacity for a breakdown, the stuck fans will get to visit and ‘Shop Loudoun.’

I only wish if McAuliffe were going after an NFL team, he would go after a winner instead of a loser.

I don’t believe in using taxpayer resources to fund billionaire toys. Being losers makes it even worse.

“Compete for the stadium?” That translates into “who will give me the most in grants and tax breaks.” Any industry that can afford to pay their production employees multi-million dollar salaries per year can afford to build their own production facilities without public assistance. And I am unconvinced that the presence of the Redskins has been a net boon for the communities they have been located within in the past.