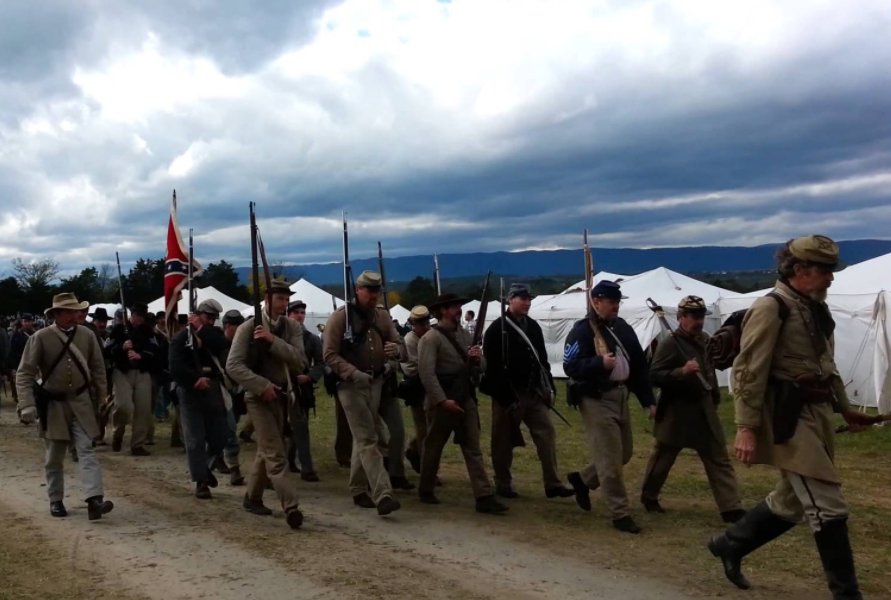 The crybaby SJW’s (Social Justice Warriors)  have found a new hate object – Civil War re-enactments.  As most of you are already aware, the 153rd Anniversary of the Battle of Cedar Creek, the last major action in the Valley, was partially ruined thanks to a bomb scare.   And what’s worst about it is, this was one of the few battles in which the Union won.

This battle had more to do with Lincoln’s landslide victory in 1864 than any other military action in the War for Southern Independence.  See, through much of 1864, Lincoln was no guarantee to win re-election.  So much so that he did not run on the Republican ticket, but formed a new political party and ran on that ticket.  Even though Sherman had taken Atlanta by this time, there were many who still believed that Lincoln would lose.  However Sheridan’s great victory, and what became known as “Sheridan’s Ride” captured the imagination of the North, and that propelled the Lincoln re-election.

Quite frankly, the fact that some angry SJW who didn’t want to see people learn about their history should not come as a shock.  Even an MSNBC prognosticator could have predicted that some nut would try and plant a bomb.  However this time, the SJW’s seem to have gone too far.  Thousands upon thousands of disappointed spectators were grumbling, and many of them Democrats, saying how they felt cheated that their kids had to miss this fun event.  Re-enactments are great gun for families and the re-enactors alike.  Re-enactors (for the record I used to be a re-enactor back from 1986-1991) teach about history which is not taught in the history books, and do so in a way which brings real life to the masses.  Re-enactors humanize the massive casualty lists.  And people of all races and sexual orientations and political leanings love re-enactments.  So much so that all I heard on Saturday from my Democratic neighbors was grumbling about how “these stupid snowflakes ruined their day” and how they were embarrassed that the SJW’s have gone off the rails this time.

However bomb or no bomb, the re-enactment went off – not 100% the way it was supposed to, but it still went off.  The re-enactors decided in a moment of unity to re-enact the battle – and then afterward – North and South, shook hands.  This generation, of whom many cannot handle any opinion which differs from them, should look at our re-enactors and their behavior this weekend – we can learn many lessons from them, and not just on the Civil War.

‘Cultural war, war of cultural identity,’ these are rather light terms which are in no way descriptively adequate to the onslaught of a total war of destruction now being waged against the American people and those of Europe. In point of fact, the never openly stated single-minded objective of our oppressors has always the annilation of Western Civilization and its Christian based system of Law. In America, this holds true from the time of Dewey and Horace Mann to the present moment. And in all this time, nothing has changed except the dazzling color of the tinsel.

What do I want? Political representation with real fight for a real cause. What do I get this election cycle? Nothing worth going to the polls for.

Nothing will change until we have a populace smart enough to displace the entire political establishment as is presently existing. The aim must be to displace. Not to replace with more of the same.

This is how a cultural identity is destroyed. Fortunately, this time, the event proceeded and the bomb discovered, but what would have happened if people had been injured? Then of course parents are going to become afraid to take their kids to Civil War reenactments for fear of their safety, and those kids grow up knowing a lot less about Virginia’s role in the WBTS. The fact that actual battle was a Union victory makes it even more ironic, but in the end, the aim by the left is the same – to vilify those who reenact that war, which is by and large a Southern thing.

Isn’t it sad that the left has come to this, attempting to bomb people for reenacting our history?

That’s okay, Republicans are getting their revenge by getting rid of the local and state tax deduction. Democrats are always talking about “tax breaks for the wealthy” … well, people who make over 100k/year in Democratic strongholds are the ones who get 90% of the benefit of this tax deduction. Now that Republicans are ripping that tax break from their delicate little hands they’re crying like the entitled little babies they are. It’s rich watching Pelosi defend tax breaks for her rich cronies in San Francisco. Democrats are all about taking money from the rich until its THEM. It has always been rich irony that the Democrats have become the party of the rich and yet somehow think that all the poor farmers and rural people who vote for Republicans are somehow “voting against their own interests”.

Here, talk about this,

We are over $20 TRILLION in debt. We pay about $435 BILLION per year in interest alone on that debt, or over $1 BILLION each day in interest.

You remind me of someone who eats a salad everyday because they are afraid of getting colon cancer. Yet, as soon as they finish their daily salad, they reach in their pocket and pull out a Marlboro red for a smoke. True story from 2005.

This country cannot afford a tax cut for anybody.

I would note that once the Bush tax cuts became effective in 2003, deficits DECREASED (even with two wars going on). Yes, I looked it up myself at OMB’s web site. The issue with deficits is SPENDING. Besides the interest that you correctly point out, there are the entitlement programs that will go bankrupt within 20 years or so driving debt and deficits. We do need more economic growth with the tax cuts and/or reform.

Entitlements are a non issue for years to come. Why? Because as required by law the government has to pay back the intergovermental debt that it owes the entitlement programs. For example, the governent now owes the SS trust $2.9 TRILLION. To “fix” SS now, would simply put more money into the SS trust which the government would then take out and spend for others things there by increasing the money owed even more TRILLIONS. In other words, the con artists in congress never intend to repay the inter-goverent debt of about $5-6 TRILLION.

Go back and research the Reagan tax cuts and come back and tell me what they did to the deficit and what Reagan had to do to slow the result of his tax decrease.

We cannot afford tax cuts for anybody. Bring the jobs back to increase revenue. The American corporation will use any money from a tax cut to just throw more money in political campaigns and PAC to screw Americans even more.

Please, as if you cared about the debt.

To the point, however … I don’t care. The debt is already unsustainable, and there is no way this country will ever pay it off, it’s simply impossible at this point. So if the dollar is going to be destroyed, and leftists are going to use every opportunity to raise deficits by spending on social programs … why not raise deficits for tax cuts instead ? Fiscal irresponsibility at it’s finest … but we’ve already seen that warning about the impending debt collapse hasn’t stopped Democrats from spending money on social programs … voters love it, so to hell with it … if we’re going to hell, might as well go with lower tax rates.

You’re drunk on ignorance and Limbaughism.

Well, I don’t know how old you are, but I am old enough to remember the Reagan tax cuts. They stimulated the economy and led to a doubling of Federal revenue. Why did deficits increase? Spending! Part was the military buildup (a discussion for another time, I suppose), but a lot also had to do with increased social program benefits enacted at the end of Carter’s administration. I specifically recall the head of the Congressional Budget Office (a Democrat) confirming this.

Since money is fungible, yes, entitlement programs are an issue if they are the cause of a lot of debt and future obligations. Lots more than tax cuts.

Don’t you have some Jewish bankers to blame for your problems?