It is all about race

Race was the predominant factor in determining the Congressional redistricting plan. Because race is the dominant factor, strict scrutiny applies. Strict scrutiny requires that the congressional redistricting plan be 1. narrowly tailored to meet a 2. compelling state interest. Re #2: Compliance with the Voting Rights Act was a compelling state interest. But, the legislature did not narrowly tailor (#1) their law.

How could this be?

The law was designed to avoid “retrogression” or a weakening of minority voting power. The problem from the Court’s perspective was that the General Assembly arbitrarily chose to impose a minimum 55% black voting age population for the 3rd Congressional District. In short, the General Assembly needed more justification (such as a series of studies) to show that the 3rd district boundaries were the least restrictive means to avoid retrogression.

So the Congressional redistricting plan is racist, how does the Court plan to fix it?

As I noted in 2011, the Court has broad discretion over the remedy to impose when striking down a redistricting plan. “Equitable considerations preclude remediation prior to Virginia’s November 2014 elections.” The current elections in less than a month will go forward as planned. This is in part because the parties in the case waited 19 months before suing. Instead the General Assembly is mandated to come up with a new plan and pass it by April 1, 2015. All of Virginia’s congressional districts are subject to change.

Whether the 3rd District is racist or not, it sure is not compact and contiguous: 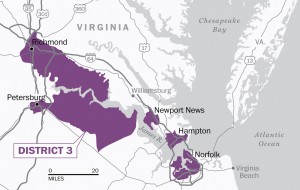 Perhaps Virginia’s politicians shouldn’t create the redistricting plan in a smoke filled back room next time.

UPDATE:  Here are a few links from my coverage in 2011 in response to some comments and questions raised.

There were two competing plans that were made known to exist back in 2011.  One was from the ACLU of Virginia.  The other was promoted by the Virginia Legislative Black Caucus.

There was a lot of discussion from both parties about having a non-partisan committee draw the districts. Of course, that support was stressed mainly after the map was finished, but here is their chance.
What do you think the odds are?

The majority seemed to twist themselves in knots in order to find that the district was drawn with race being the overwhelming factor for the lines. Virginia was required to balance a fair amount of factors when it came to redistricting, including compliance with the Voting Rights Act. The court ignores the debate on both sides during 2011; incumbency protection was the major consideration with the map that finally passed, not race. I think that certain Democratic Senators would have called the map “racist” on the floor if it actually was.

I took a class under Professor McDonald during the 2011-2012 redistricting process. He pointed to incumbency protection and not race at the time. His about-face on this is can only confirm his bias.

Finally, no district in VA is quite compact. The 3rd is not significantly less compact than the next least compact district. And the Virginia Constitution allows for contiguity by water, so the 3rd is contiguous.

A redraw of the map will certainly hurt Republicans in 2016. I can’t see why you apparently think that this is a good thing.

The majority is entirely dismissive of the weaknesses of the Plaintiff’s expert, but they also point out severe flaws in the Defense expert’s background and analysis. Incumbent protection may be job 1, but racial compliance with the VRA was job 1a. In the end you are probably right on this point.

Contiguity by water: “. . . geography and population of this Commonwealth necessitate that some electoral districts include water, and that land masses separated by water may nevertheless satisfy the contiguity requirement in certain circumstances.” Virginia
Supreme Court restating the acknowledgment of the parties in Wilkins p.
16. Contiguity by water is allowed but then analyzed by the following standard: The non-contiguous nature of the district must not “[be] unreasonable, [be] unduly burdensome, or adversely impact[] the ability of residents to secure meaningful representation of their interests or effective communication with their elected representative.” Wilkins p. 21.

Contiguity by water is allowed, but under case law has only been upheld in reasonable circumstances (and never stricken down, although very few cases are filed).

Correct. Islands, peninsulas, communities on opposite sides of a bridge, those are reasonable. With the 3rd, it’s every black community within eyesight of the James River for 80 miles, with huge gaps in between those communities.

As for the end result of redrawing the maps: My desire has ALWAYS been for a fair redistricting process with no apparent gerrymandering. I also believe in equally applied campaign finance laws, and government openness and accountability regardless of the party label. Republicans have the VA house and senate, and McAuliffe has the Governor’s mansion I doubt we will get something that does not protect incumbents again.

A fair redistricting process would be ideal. However, the Plaintiffs in the case ask for a similarly skewed map just to pick up another seat in the VA delegation. The remedy that the Court provides is to have it go back through a (bi)partisan process. This will garner the same results as last time.

In an ideal world, the GA would establish a Redistricting Commission that would be strictly instructed to redistrict every ten years with regards to several factors, including but not limited to, compactness, contiguity, respect to local communities, and historical boundaries.

Finally, VA is poised to pickup another Congressional Seat after the 2020 Census, if population trends hold. Wouldn’t it have been nice to hold off on this sort of mess until then?

If you were to overlay a map of the district with a race color coded census block map you would see that the lines are drawn between blocks with near 100% African American population and near 100% white population. Race was definitely the overwhelming factor. This is an old map I made, no legend, but Red is 100% African American, Green 100% white.

Not so fast. I could pull up a very similar map, except that the colors would indicate party affiliation and not race. I know you would get a very similar result.

I truly believe that Rep. Bobby Scott, among others, would have spoken out loudly against the current map if he believed that civil rights were being violated and BVAP were being packed in the district.

Actually you couldn’t, because the white voters are only marginally more Republican than they are Democratic in the parts of Norfolk and Newport News that got put into Rigell’s district. I’ve got those maps too, but that uses data from the voter file and I don’t have authorization to just post that kind of stuff on the internet.

Bobby Scott only cares about getting re-elected and he’s smart enough to know that so long as the DOJ pre-cleared the map, he had no chance of getting it changed. He did support the alternate plan, but it had no chance of passing so it wasn’t worth him making a big deal out of.

You could get the same partisan performance of our current districts with different lines, but black voters are such a monolithic Democratic bloc that it makes more sense to use them as the deciding factor because its got a drastically higher probability of keeping the seat indefinitely Democratic.

You made my point in your first sentence. Pull the more solidly D precincts into the 3rd, and the marginally more R ones into the 2nd.

All I am saying is that there are various different ways that this can be looked at by reasonable people. It’s difficult to jump to an overwhelming conclusion of racism.

It’s not racism, it’s just race. Republicans and Democrats collaborate on it. It would be statistically impossible to draw the lines that get drawn for the Congressional districts and legislative districts in Virginia and everywhere else in the country unless you are using Census Block data based on race. It was an unintended consequence of the Voting Rights Act, it basically mandated that race be the primary factor in drawing districts. The only way you can ensure no retrogression of minority voting populations is to draw the lines while looking at a map color coded by race. I did work on Norfolk’s redistricting for their city council wards, I tried to do it without looking at racial makeup, but it would have taken me 1000 tries to get the VAP race balance right without having it in front of me.

You are a lawyer. How is it that you missed the impact of Shelby County vs Holder on this case? It says in the opinion about 15 times that had it not been for that ruling the lines would have most likely been fine. No voting rights act compliance, no compelling state interest. Narrowly tailored is in the eye of the beholder, which under the VRA pre-Shelby County v Holder was the DOJ.

Or am I missing something?

The Court then goes on to determine that, at the time passed, the redistricting plan was not narrowly tailored. Pages 39-41 (with details on pages 41-44).

Shelby is further dismissed as a basis for delay by the Plaintiffs at page 546 fn 24.

For all the voluminous mentions of Shelby and its seminal nature, it is not controlling for the majority. That is why I did not get muddled down in the discussion of Shelby.

“had it not been for that ruling the lines would have most likely been fine.” I just did not see this in the opinion.

How about in the absence of Shelby deference would have been given to the DOJ’s decision and the court wouldn’t have wanted to overrule a plan that was given pre-clearance? Has that ever happened before?

Thank you for trying, it is much appreciated. I’m no lawyer, though I’m edging ever closer to having been paid enough by them to put myself through law school, but I have to think that without Shelby this ruling wouldn’t have happened. Is it typical for a case to be mentioned as many times as Shelby is and not be considered a controlling factor? Otherwise why bother mentioning it so many times? The opinion goes out of its way to defend the legislature numerous times in saying that at the time they legitimately felt like they were following the law. I happen to agree with the opinion, but along with legal work, I do GIS analysis and in the absence of Shelby, using the criteria laid out in the opinion, they should have been invalidating districts by the dozen years ago.

“in the absence of Shelby, using the criteria laid out in the opinion, they should have been invalidating districts by the dozen years ago.”