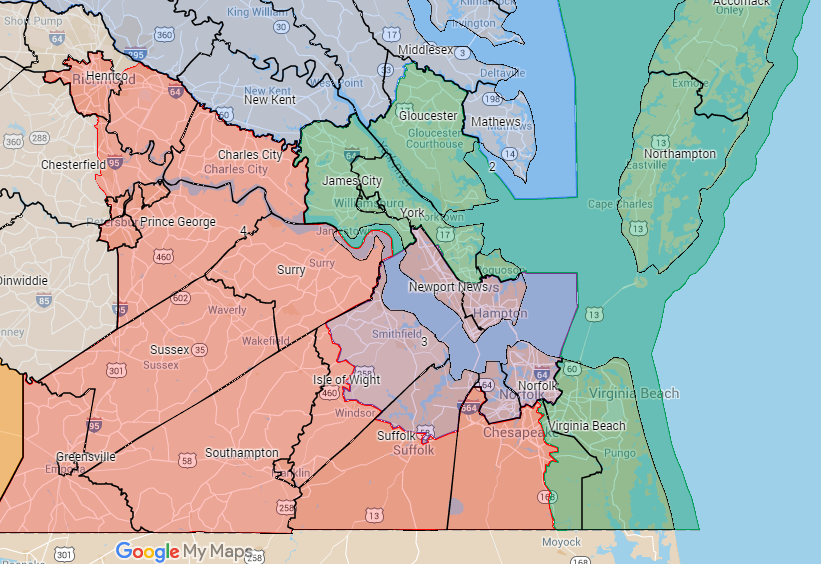 New Virginia Congressional Districts Still up in the Air

Yesterday in Richmond a three Judge Panel heard oral argument in the case challenging Virginia’s Congressional Districts.  On the agenda were two items:

1. Should the Court delay a ruling until the Supreme Court has opined, and
2. What should the new Congressional districts look like now that we have gone through party submissions, briefing, and the Special Master’s Report?

What is missing from all of this glorious coverage?

Judge Payne is the dissenting voice, not the controlling voice, on the three Judge Panel.

The other two judges (one remains the same, another was replaced for logistical reasons) have always ruled the 3rd Congressional District as unconstitutional, both in October 2014 and June 2015.

Repeatedly, the Congressional Republicans have asked for the case to be delayed while the appeal process ran its course, and the G.A. had a chance to write new boundaries.  Aside from a short delay that was granted in late 2014.  Judge Payne has been the only Judge willing to extend the time frames in this case.  He has consistently been opposed by the other two judges.

Judge Payne was also on the three Judge panel that upheld the Virginia House General Assembly Districts as Constitutional, and he wrote the opinion.

In the Virginia Congressional District case Judge Payne does not carry the Court.  He is doing his best to thread the needle for the most reasonable outcome to keep from disrupting Virginia elections.  He will have to convince one of the other two Judges to join him in order for the current districts to remain intact for the first half of 2016.

We can likely expect a decision before the new year.

For all you Republican party political nerds out there, what is the major concern?  Congressional District conventions in 2016 to decide the makeup of RPV depend on a court order entered by a divided three judge panel that could be overturned two months after district conventions are held.