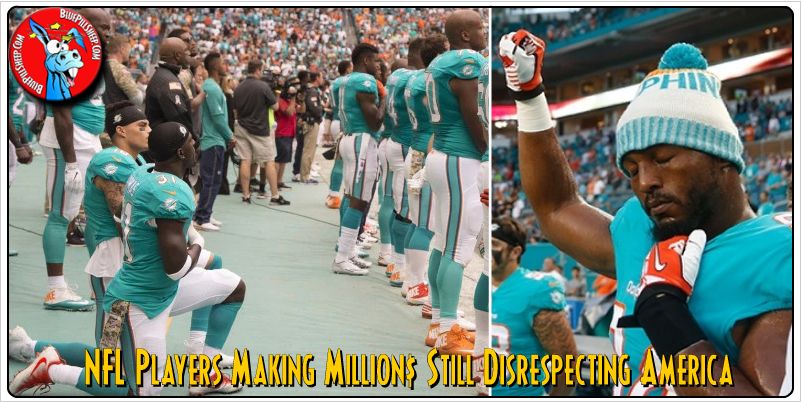 The NFL is allowing players to kneel, sit, or even raise their fist, during the National Anthem prior to games.  Players claim it’s their ‘free speech’ right to act out against America.  Obviously, they do not understand the First Amendment.  None of us has the right to free speech at work.  The NFL could take disciplinary action against the football players but so far they haven’t.  Let’s review the NFL’s free speech history:

In 2013 the NFL fined Brandon Marshall for wearing green cleats to raise awareness for people with mental health disorders.

In 2014 Robert Griffin III (RG3) entered a post-game press conference wearing a shirt that said: “Know Jesus Know Peace” but was forced to turn it inside out by an NFL uniform inspector before speaking at the podium.

In 2015 DeAngelo Williams was fined for wearing “Find the Cure” eye black for breast cancer awareness.

In 2016 the NFL prevented the Dallas Cowboys from wearing a decal on their helmet in honor of 5 Dallas Police officers killed in the line of duty.

In 2016 the NFL threatened to fine players who wanted to wear cleats to commemorate the 15th anniversary of 9/11.

It looks like the NFL allows free speech only if it is a protest against the United States.

Hey, TB, loved that post criticizing the White Supremacists rally in DC this weekend and how they are disrespecting America by carrying her flag as their new symbol.

And then there’s this in front of our Whitehouse:

What is more American than guns and titties? Where is the disrespect?

25 kooks showed up and marched peacefully. So what? White Supremacy / White Nationalism is not an existential threat to our nation and to our well being – no matter how much you leftist loons pretend it is. But, to assure you that TBE is not some clandestine neo-Nazi network, I will write an article condemning neo-Nazis and Nazism in general.

I suspect there were about as many neo-Nazi’s at the rally as there are NFL players (peacefully) taking a knee and of course the NFL players are also not an existential threat to our nation or our well-being. Of course, the NFL players did not kill a person during their protests a year ago. But there is one big difference between the two groups and that pretty much explains the nature of how the two are addressed here and by your president.

All on the account of that counter culture liberal Roger Goodell