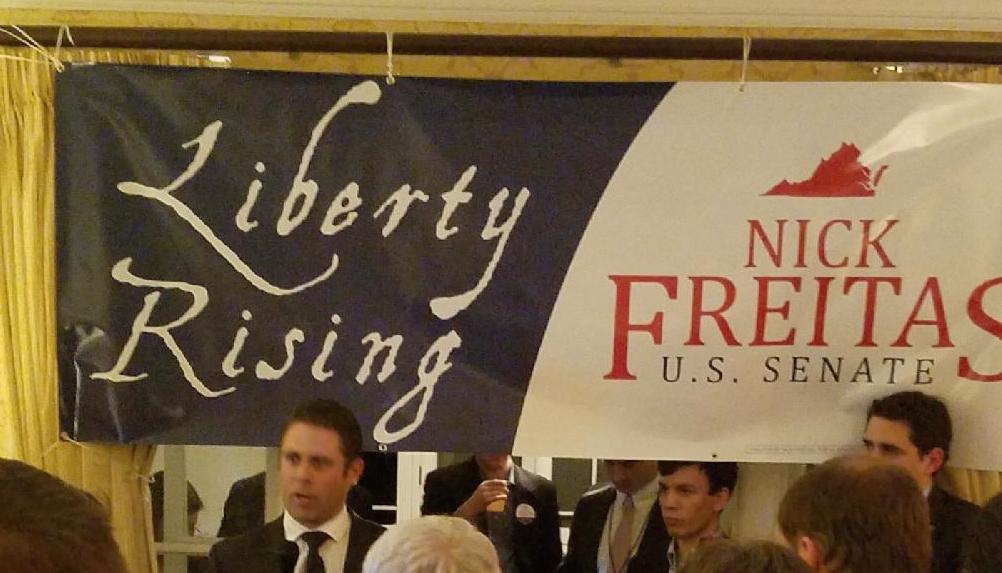 Delegate Nick Freitas announcing his run for US Senate

At the annual Republican Party of Virginia Advance, held at the Homestead Resort, Delegate Nick Frietas announced his run against Tim Kaine for Senate.Â  The room was packed, overflowing into the hallway, when he delivered his announcement that centered around individual liberty and responsibility and not becoming a victim expecting the government to take care of you. “When you begin to believe you are a victim, you become a victim.”

Freitas was introduced by Denver Riggleman, a former candidate for Governor and another champion of liberty.Â  Freitas’ speech is worth watching. This is a man who can beat Tim Kaine with his powerful message.

Mr Freitas seems to have a reasonable conservative message that will be dragged down by the incessant circus that is the RPV. An RPV that absolutely will not call out ridiculous crap under the guise of Party unity.

I’m pleased to see Del. Freitas run, too. Beating Tim Kaine is going to be an uphill battle, but we as a party cannot put someone on the ballot in a national election who was photographed and hobnobbed (though I believe unwittingly) with ardent neo-Nazis and KKK people. That photo will be bandied about by Kaine and PACs and the national media. Virginia will be a laughing stock. It’s regrettable Corey Stewart ran that kind of campaign and that so many good Republicans are backing him. but it is what it is.

He has stated he did not know who they were when he was photographed with them. Anyone who has been in politics for any length of time statistically is going to encounter a few fringe elements from time to time, and in this media age, it is just inevitable that some bad press will result.

Stewartâ€™s latest trip to Alabama to support Roy Moore
Might cause one to revisit what is unwitting or not.

Stewart may spend the next months taking apart
The Republican Party piece by piece , until little remains
Outside of a pool of resentment and anger.

Liberty is a word freely and irresponsibly tossed around in campaigns today.
It was Abraham Lincoln accurately knew of Liberty.
Lincoln said that America is in need of the definition of the word Liberty for some the meaning is for a man to do with the fruits of his labor as he wishes (this is myself) for others it is to do with the fruits of another man’s labor as he wishes.
Lincoln was clearly speaking of the labor exploitatation that slavery brought.
In today’s time we have illegal immigration issues and the exploitation of immigrants in Va. because of the complicit elected within our General Assembly.
How does the current Delegate feel about this?
What can he do as our Senator to stop this?
You see the “Liberty” to exploit illegal immigrants in Va has brought us
MS-13, you know the guys that my President is currently rounding up in NOVA and Maryland.
Would the Senatorial Candidate be equally accepting of the employment of male Muslim Refugees in this manner?
The election of our next Senator will not be taken lightly by myself as it will be by some Republicans who get giddy when the word Liberty is uttered therefore I must currently hold the course with a candidate who has held the course,

Haven’t listened to NIck’s speech, but on the surface of the thing, it sounds like a focus-group decided on the word “Liberty” for his campaign. Are we really going to get any more real liberty from the Fed. Gov. if he is elected? Sounds like he went shopping on Ken Cuccinelli’s old blogs.

You’re assuming a level of sophistication that simply isn’t there with these people.

Cuccinelli was a blind man trying to lead a deaf dog.
Delegate Nick Freitas believes
it is time to rise up accent other run on the political ladder, let’s see if he is of the ability.
He served in Iraq, Great Thank You!!
Now he is for workforce development. A small ok from me because should the Goverment be in the Workforce Development Bussines? The Delegate MUST answer and defend his stance.
When you expense tax payer dollars for employment development you must exhibit the desire to defend it.
How has the Delegate worked with our current Administration in Va in “combating” employee misclassification?
Note; Current Executive order 24 and JLARC427 States it cost Va’s General Fund an estimated annual loss of 25 Million.
Now he wants to rise to a National political position.
The GAO states that employee misclassification cost our Federal coffers annually 2 Billion.
He defended us in Iraq, Great Thanks!!
Is he defending us, our laws and the legal workforce today through “combating” illegal employment?
Please point me in the direction of legislation he has brought forth or defended in doing so.
With Republicans talk is of abundance today and action is surely lacking. One could say that the action is the mere caboose on the Republican train, the train that allows sanctuary employment.

Very exciting news! Nick Freitas is authentic, the real deal, and he has been a consistent and reliable champion of Individual Liberty. I believe Freitas’ fresh voice for the values will have an appeal across party lines and is the way forward for Republicans.

Nick is the man.

Finally….a candidate Virginia can be proud of! Now – can we do it???

A dead deer laying on the side of the road would be more liberty minded than Tim Kaine. Unlike Ed, Freitas seems to have a message and so far he can’t be tied to Trump. Sounds like positives to me.

I have very little issue with the story of him watching his wife freeze while he (I assume) refused any help from the government due to his political ideology. My beef is his desire to deny that option to others who do not share his belief system when they need it in the false name of liberty.

Appreciate the post and link.
Raising money to compete in the primary,
Running for office against the grain of entitlement
and in a poisonous political climate are difficult challenges .
I hope Mr Freitas stays the course and provides Virginians
Of all political persuasions , a light to follow their hopes and dreams .
Please keep posting and updating on this primary campaign.

Nickâ€™s message is why I became a Republican in the first place…itâ€™s about individual liberties and civil rights. If the GOP has a long term future, itâ€™s only through leaders like Nick, who cut through the identity politics crap and speak in a pro-freedom way about the issues that unite Americans. This is the way forward.

Snore… the “Liberty minded” crowd is insular and off putting to rank and file primary voters. I’m going to enjoy watching them realize it.

Don’t fret….everyone comes around to the “liberty-minded” side of the house….eventually.