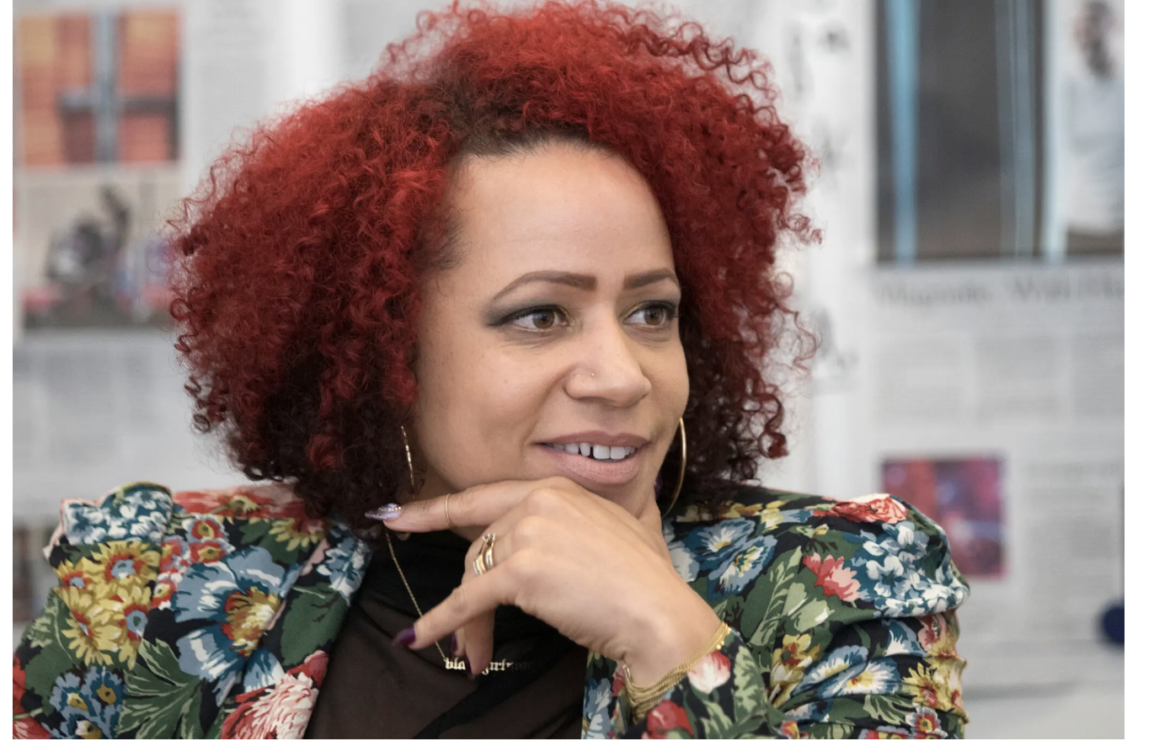 Nikole Hannah-Jones, the author of the discredited 1619 Project, spoke on September 20 in Arlington, VA.  Her appearance was sponsored by the Arlington Public Library and held at Washington-Liberty High School.

Hannah-Jones was featured during Banned Books Week, an annual event celebrated around the country promoting “the freedom to read.”  According to its website, “Banned Books Week was launched in 1982 in response to a sudden surge in the number of challenges to books in schools, bookstores and libraries.”  This year’s theme is: Books Unite Us. Censorship Divides Us.

Sounds good, but some books today are being challenged for age-appropriateness because of explicit sexual content.  Such books are held up by the organizers of Banned Books Week as examples of targets for outright banning, without mentioning age-appropriateness.  Opponents of teaching these materials to young children are not calling for the books to be banned, only to be kept out of classrooms with very young children.

Similarly, Nikole Hannah-Jones is celebrated for her 1619 Project, despite the fact that it is not historically accurate and has been widely criticized for fabrications. [She premises that the history of the United States began when a slave ship arrived in Jamestown, VA in 1619.] But Hannah-Jones and her supporters don’t tolerate criticism; rather, they call people who point out the historical inaccuracies of her work “racists” and then claim those racists want her book banned.

The 1619 Project was constructed by Nikole Hannah-Jones and then rolled out in impressively coordinated fashion most prominently by The New York Times and the National Education Association.  The author even was awarded a Pulitzer Prize for her creation.

Hannah-Jones admits that she is a “journalist,” not a historian.  Clearly, she’s not a historian, evidenced by what she said at Washington-Liberty High School: “What we’re really talking about is … actually not what happened on what day and who did it, but it’s how do we think about the country.”

“Narratives drive policy,” declares Hannah-Jones. “Storytellers and journalists can paint a vision of the world that can lead us to become the country that we want to be.  We can legitimize and delegitimize power.”

More from Hannah-Jones as she railed against the United States of America: “You try to redistribute these ill-gotten gains.  Storytellers provide the narrative that drives the policy.  And that policy changes depending on who has the power to shape the narrative.”

Throughout her address to the audience (which probably numbered around 200 people, mostly adults), Hannah-Jones was obsessed with power and race.  She warned at the beginning that she does not give “uplifting speeches.”  No, her shtick seems to be to pick at the scabs of history while reframing and rewriting it;  characterize black Americans as “still at the bottom of every indicator of well-being” and blame white Republicans for trying to take away black Americans’ rights; badmouth Donald Trump, Ron DeSantis and Glenn Youngkin because … well, they’re white Republicans.  You get the idea.

Remember, Nikole Hannah-Jones is a journalist and storyteller, not a historian.  She said that herself.

Also, remember that the National Education Association was instrumental in getting the 1619 Project into schools across the country. What is the role of education, according to Hannah-Jones?  In her words: “I would argue that the role of education should not be to raise patriotic citizens but to raise global citizens with the truth.”  Her truth.

And what does the author believe about America?  At her Arlington event she stated unequivocally, “We view this idea of American exceptionalism really so that we don’t have to be self-critical, so we don’t have to strive to be better, we use it to justify a lot of harm and a lot of inequality. Because the truth is we are exceptional, just in many ways that we should be ashamed.  And this is a fact:  We are one of the most unequal societies in the history of the world.”

Furthermore, Nikole Hannah-Jones doesn’t believe America was a democracy until 1965. Only after 1965, she said, did we “actually have a multiracial group of citizens that are determining the politics of our country.” She never acknowledged that America was founded as a Republic, nor did she acknowledge the countless contributions to American culture of native-born and immigrant populations.

Hannah-Jones calls America an “Ethnocracy, a ‘democracy’ for one ethnic group …. a type of political structure in which the state apparatus is controlled by a dominant ethnic group to further its interests, power and resources.”   The philosophy of Karl Marx echoed throughout her remarks.

The 1619 Project is just one prong of the current relentless attack on the American Experiment.  Its curriculum and champions are not about building a better America. They are about destroying what remains of America and, in its place, building  ….. what? They don’t say. But we can guess.  Communist revolutionaries always promise an undefined Utopia.

At the entrance to the Museum of Communism in Prague, capital city of the Czech Republic, stands a foreboding statue of Karl Marx with a large red star hanging over his head.  On a wall behind him are these words:  Dream. Reality. Nightmare.  The 1619 Project is a dream masquerading as reality, ending in a nightmare for those who refuse to learn from history.

“Debunking the 1619 Project: Exposing the Plan to Divide America” by Mary Grabar

Catherine — is her book used in the classrooms in arlington or other school districts in Virginia? Not a library book, but is it used in a classroom? Please advise.

I have not called the schools so I don’t know for a fact, but I’m fairly confident that the books are circulating there. Best to ask actual students for a truthful answer.

“I would argue that the role of education should not be to raise patriotic citizens but to raise global citizens with the truth.”

In Illinois, her dystopian world exists. Recent reports, based on 2019 data (pre-pandemic), show that some districts have 3% of their 3rd grade kids reading at a 3rd grade level. 97% fail. And, yet, 99% of the teachers are rated “excellent.” But they are learning about equity. They can’t read and are doomed to a lifetime of failure.

1 month until some semblance of sanity is restored!

She forgot the 1618 project whe African tribes enslaved unwanted Africans to send them to the Americas.