Nine Republican Candidates for President to Debate on Tuesday, December 15th. Â Nine Republicans have qualified to be on the stage at the CNN debate this week. Â As usual Donald Trump will have the number one spot in the middle, flanked by Ben Carson and Ted Cruz. 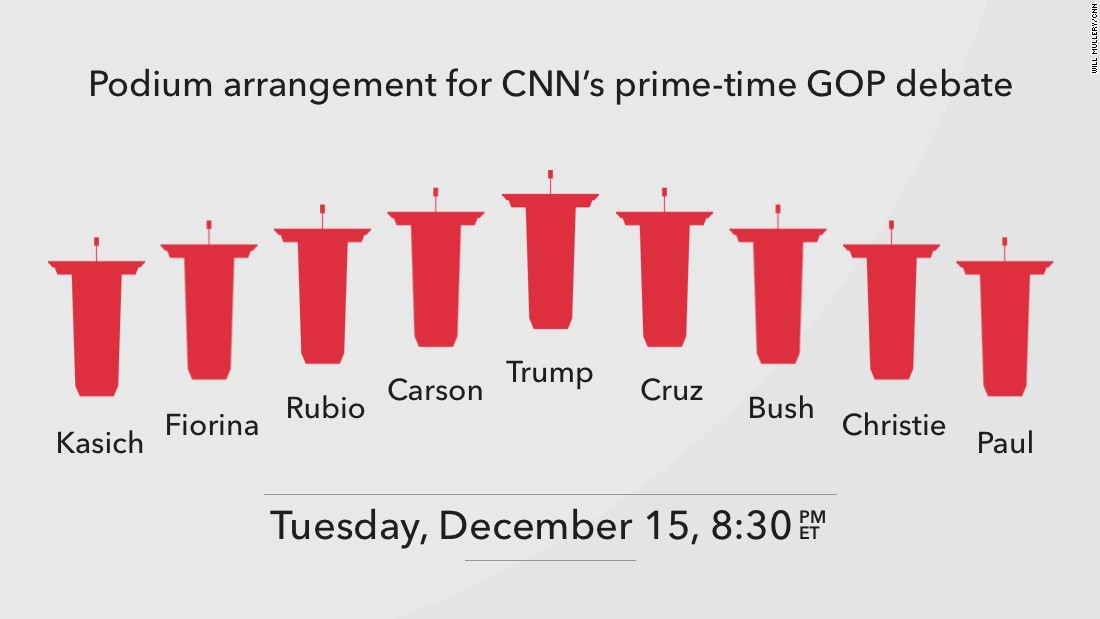 I like Rand Paul, but I had hoped he wouldn’t make the cut. He said he would drop out if he didn’t make the cut, and I think that would be best for everyone. Rand is obviously not going to get the nom, and he should make sure he does not lose his seat in the Senate.

Christie, Bush and Kasich need to drop out before Paul. For the life of me, I can’t understand why people are continuously calling for him to drop out before those three. His record is sound and his message deserves to be heard – especially over the lunacy that is Donald Trump.

Because Paul is not going to win and his staying in only helps Trump and Rubio. I do not want Christie, Bush or Kasich to drop out, even though I do not want any of them to be President. Until March, all states are proportional, then many are winner take all. The more RINOs in the race the better so they can split the RINO vote while one conservative (Cruz) gets all the conservative votes.

I like Cruz, but most of my left-leaning neighbors consider him to be almost as much of an extremist as Trump. I fear he will not do well in Virginia and I have my doubts for him in the general against Hillary. There is a large chunk of the electorate who find him too preachy. Your mileage may vary.

I remember all the same being said about Reagan. Elections are not won by getting the majority, only in getting the majority of those who vote. Reagan understood that and used it to win two landslides when even George Will and Charles Krautherhammer called him an extremist. Cruz will do the same unless Trump runs third party.

There were Reagan Democrats – a lot of them. I’m not so sure if Cruz can pull that off. In the 80s there was a good 20% of the population who was willing to change their minds and cross party lines. Now that number is around 8%. People have dug in their heels and refuse to budge. Because of this the Republican base isn’t large enough to win an election nationally; unless he can pull of a get-out-the-vote campaign unlike anything we’ve ever seen. He did well with the Hispanic vote in Texas, so he might be able to carry that over to the big show, but I wonder if his praise for Donald Trump won’t hurt him there – especially if Hillary choses Julian Castro as her running mate.

If he can mobilize the base (easy for him), and Hispanics (not so sure about this), and folks who typically don’t consider themselves conservatives (not going to happen, IMO), then Cruz has a shot.

The bulk of the woman vote is lost no matter who we put up as a candidate, I’m afraid. Hillary has that on lock. As a woman I’m ashamed and embarrassed by this fact.

I disagree. Romney won married women. I think whoever the Republican candidate is needs to pick a woman VP. I think Nikki Haley of SC is the best Gov in office right now. I think she is far and away the best choice, and will make a good first female President eight years from now.