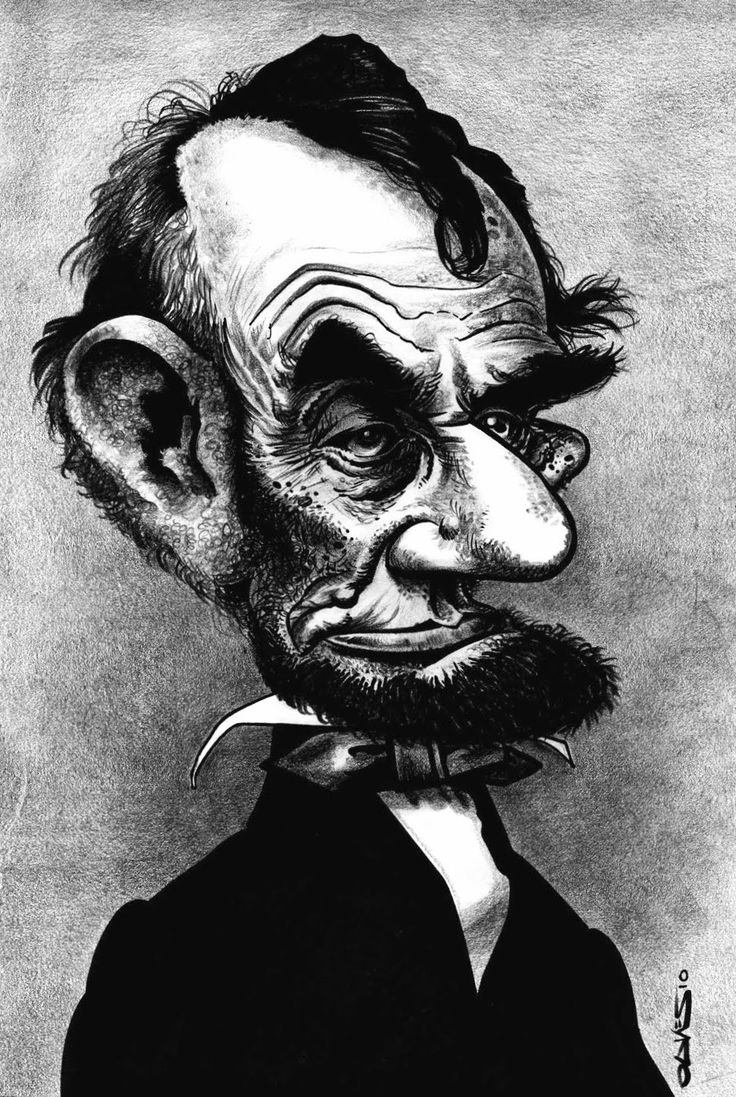 Back in the dim yesteryear of American politics, humor was the rapier of choice favored by pundits, humorists and politicians to skewer public figures they disliked – although the rapier was sometimes replaced by a broadsword or a machete. In 1860, Democrats viciously characterized Abraham Lincoln as a gorilla or a baboon for his abnormally tall and ungainly appearance. They also suggested that his intelligence wasn’t much different from either of those beasts.

To be sure, Mr. Lincoln was not a handsome man. He was something of a giant in his day, standing 6’4” at a time when the average American man was 5’6” tall. His dapper opponent, Stephen Douglas, who stood only 5’4”, looked like a midget next to Lincoln’s towering stature. But during his campaign Mr. Lincoln made no attempt to answer Democrats’ “humorous” jabs. And Americans eventually realized that he was definitely no dummy. His Gettysburg Address is considered a literary masterpiece of the 19th century.

In 1884, Democrat Grover Cleveland’s peerless integrity gave him the moniker “Grover the Good.” As mayor of Buffalo, New York, and then governor of that state, he cleaned up much Tammany Hall graft and corruption. A commentator said no candidate since George Washington was so admired for his personal rectitude.

His Republican opponent, James G. Blaine, on the other hand, was roasted for allegedly selling Congressional influence to various business-interests. In one instance he received over $110,000 from the Little Rock and Fort Smith Railroad for securing a federal land grant. The “Mulligan letters” – detailing some of his corrupt deals – occasioned Democrats’ chant:

“Blaine! Blaine! James G. Blaine! The continental liar from the state of Maine…”

Ultimately all this kept Blaine from receiving the GOP’s presidential nomination in both 1876 and 1880. One letter ended with the phrase, “Burn this letter.” This produced Democrats’ gleeful mantra, “Burn! Burn! Burn this letter!” during the 1884 campaign.

But then Republicans discovered a skeleton in Grover Cleveland’s closet. The saintly guv had reputedly sired an illegitimate child in Buffalo with a woman named Maria Crofts Halpin. Cleveland admitted having an “illicit relationship” with Miss Halpin, but it was never clear if he was actually the father of her child. She was evidently involved with several men at the time, including Cleveland’s friend and law partner, Oscar Folsom, for whom the child was named. Cleveland took responsibility for the child’s support, as he was the only bachelor in that group of men. The sensational (for the time) disclosures inspired a rakish Republican chant that has an honored place in the pantheon of sharp-edged political humor:

All this might have wrecked Cleveland’s presidential candidacy, but he directed his aides and campaign staff to stick to the truth at all times (imagine that) – a strategy that worked well enough to keep the race deadlocked into its closing weeks. Then, a group of Protestant ministers attending a Blaine campaign rally made the disastrous mistake of castigating Democrats as the party of “rum, Romanism and rebellion.” Blaine, who was present at the rally, failed to notice the anti-catholic slur, but a Democrat operative who did notice made sure it was widely publicized. This insult energized the Irish and Catholic vote in New York City against Blaine, causing him to lose the state by just 1200 votes and the election by a narrow electoral-college margin. In a final post-election riposte, Democrat answered the GOP’s chant by gleefully adding a line to “Ma! Ma! Where’s my pa?”

These colorful snippets from our political past show how little things have changed, and how much. Both sides still dig up dirt on an opponent and use it to skew the contest their way. Now, as then, salacious pasts and corrupt dealings of candidates are part of the political arsenal. And now, as then, religion and personal conduct are often used to support and attack candidates.

But things are different now with respect to sharp-edged political humor. Were the Cleveland-Blaire campaign occurring today, the Republicans’ “where’s my pa?” chant would be met with indignant denunciations from Democrats, and a blizzard of outraged media commentary. ‘How dare Republicans mock an innocent child who can’t help how he was born?’ they would declaim. ‘Rich men cruelly demeaning single mothers! It’s shameful! They should be offering help, not mockery…’ etc., etc., etc.

The media circus would continue for weeks, with Democrats deploring Republicans’ “ridicule” of this poor woman and her child. Media round tables would be awash with tears over the GOP’s “insensitivity.” Meanwhile, the moral issue of a candidate having sired an illegitimate child would be forgotten. Some things can’t be joked about today. Single motherhood is one of them.

In 2016, reports emerged that Democratic National Committee e-mail accounts had been hacked. Thousands of messages were made public by Wikileaks, which had obtained them by undisclosed means. Democrats immediately charged that “the Russians” did this to hurt Mrs. Clinton and help Donald Trump. With this pre-emptive strike Dems hoped to divert public and media attention away from what the e-mails revealed about high-level bias against the campaign of Bernie Sanders. The released messages clearly showed that the fix was in for Mrs. Clinton. Disparaging comments about Senator Sanders’ Jewish religion and ethnicity were also made in the e-mails.

Republican candidate Donald Trump responded to all of this by ironically expressing a “hope” that the Russians might release Hillary Clinton’s 33,000 missing e-mails, which government agencies had been unable to find. It was clearly a wisecrack, but today only Democrats dare to tiptoe through the minefield of political “humor.” When Republicans go there, a storm of protest and recrimination comes down on their heads.

This reality was amply illustrated when Democrats and numerous media grandees quickly denounced Mr. Trump for his “completely inappropriate” calls for a foreign power to “hack” Mrs. Clinton’s e-mails. Pundits and “journalists” (using the term loosely) went on about it for days, with some going so far as to charge Mr. Trump with “treason” for even suggesting such a thing. Some darkly speculated that Mr. Trump might have conspired with the Russians on the DNC-hack. Democrat partisans were beside themselves with glee over the entire contrived crisis.

Lost in the media-orgy, however, was a plain fact: Mr. Trump did not call for anyone to hack anyone’s e-mails. He was merely twitting Mrs. Clinton for using a private e-mail account on a non-secure computer server that almost certainly was hacked by foreign interests – probably including the Russians. That server couldn’t be hacked further because it was locked up in the FBI’s evidence room. The damage, if any, was done years earlier while Mrs. Clinton was Secretary of State.

Mr. Trump was using the news of the DNC e-mail hack to remind voters, tongue-in-cheek, that the Russians probably had the 33,000 missing e-mails already. Since they had (allegedly) released the DNC’s e-mails, he “hoped” they might also turn over Mrs. Clinton’s missing e-mails to the DoJ – as a public service, of course – since FBI agents simply couldn’t find them during their lengthy investigation. Of course, he was kidding. Millions of voters got the joke. Only Democrats and their humorless media acolytes pretended not to.

Long ago, Will Rogers quipped: “Every time Congress makes a joke it’s a law…” Today he might say, “Whenever a Republican cracks a joke, it turns into an investigation.”

Beyond Mr. Trump’s jest, however, lurks the ominous, unacknowledged possibility that foreign agents already had Mrs. Clinton’s e-mails. Did they plan to blackmail her with them if she became president? Like a fire-bell in the night, this question should have awakened Americans and filled them with terror. In fact, it might have done so, as they (wisely) chose not to elect her. Could such influence already have been exerted over Mrs. Clinton when she was Secretary of State? Only Mrs. Clinton knows for sure. And it’s hardly a laughing matter.

Did this kerfuffle damage Mr. Trump? Perhaps it did among people who heard only what the media said, and looked no deeper. Mr. Trump is learning the rules of this one-sided game (although one doubts that he is obeying them). Humor can be an effective and entertaining tool in public venues, but reactions to a jest – especially when media are aligned with the target’s politics – can be unpredictable.

Mr. Trump is not traitorous, and he didn’t advocate treason. But Mrs. Clinton’s “careless and negligent” conduct – as FBI Director Comey so scathingly put it – certainly came close to that line, and may well have crossed it. Her party and her media defenders know this well, which is why they stand ready to attack any reminder of her conduct – even in jest.

The lesson voters should take from the ruckus over Mr. Trump’s e-mail joke is always to look beyond the media-spin for the candidate’s original remarks. We need to get wise to media’s skewed treatment of Republican humor. Dems – as they say in New York – got no sensayumah! It’s a warning flag when a person sees nothing funny and cannot laugh or joke about himself. “Beware a man who never laughs,” my pop told me. “There’s something wrong there.”

In fact, Democrats and leftists seem to be galloping toward C. S. Lewis’s classic description of Hell. One of the twentieth century’s greatest Christian apologists, Dr. Lewis rejected the comic imagery of flames, red tights and pitchforks. His metaphor for Hell was “…the bureaucracy of a police state or the offices of a thoroughly nasty business concern …where everyone is perpetually concerned about his own dignity and advancement, where everyone has a grievance, and where everyone lives the deadly serious passions of envy, self-importance, and resentment.”1(Sound familiar?)

The “mark of Hell,” said Dr. Lewis, is a “…ruthless, sleepless, unsmiling concentration upon self…” – a lack of any “…proportion and ability to see [themselves] from the outside.”

Speaking of hell, I’ll probably get some for writing this piece. But if the shoe fits, I say wear it.

“The Devill, that prowde spirite, cannot endure to be mocked…” (Thomas More)