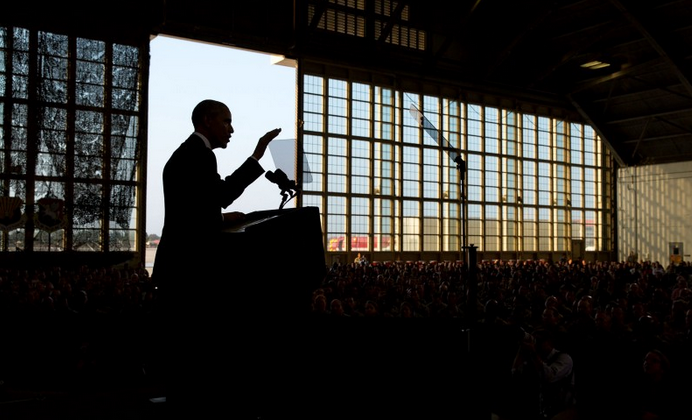 No, Obama didn’t call for troops to disobey Trump’s orders

After eight years of mistaken foreign policy, President Barack Obama is finally ending his term as Commander in Chief. While it is expected that Americans look critically on his time in power, his Dec. 6 address to our nation’s men and women of service at MacDill Air Force Base in Tampa, Fla. was not an example of his political disconnect but rather a remembrance of what our military fights for.

Some pundits in media were quick to assert that Obama was somehow bashing President-elect Donald Trump throughout his speech, Zach Beauchamp of Vox media explained that,

Obama’s address contrasted Trump’s vision for America with the values American soldiers have stood for, casting Trump outside the tradition of those who vanquished slavery and Nazi Germany. In one of very last sentences, Obama reminded the soldiers of their oath to protect the U.S. Constitution against its enemies, ‘foreign and domestic’ — a unnecessary reference that serves only to highlight that threats to American values can come from within as well as without.”

Obama did remind Americans of their ability to question the current administration and have their voices heard, however, here Obama did not conduct the grievance for which he is being blamed.

As Obama discussed the freedoms of the First Amendment he referred consistently to the general society we live in and what our country represents. Obama describes our country as a place “to live in a society that’s open and free, that can criticize a President without retribution, a country where you’re judged by the content of your character.”

Here, Obama did not tell military personal to ignore orders by Trump as some have asserted; he spoke broadly about our national values.

While these statements were made in front of military personal, his speech acted more of a statement of values for the nation than some implicit order for our military to follow under Trump. These were not statements to encourage the military to act against Trump, but simply noting the fact that we as a nation democratic participation across society, which includes the ability to criticize who hold positions of power.

One might argue that Obama does make a flaw with the venue of the address, addressing troops. The freedom of speech and protest which each citizen is afforded is truly unique and fundamental to the American identity, however; not all Americans share that right in the same way.

The First Amendment Center explains that “When it comes to freedom of speech and members of the U.S. armed forces, there’s always been an obvious irony: The very people who risk their lives in defense of the First Amendment live under regulations banning their full use of it…The Uniform Code of Military Justice, the legal rules for the U.S. armed forces, generally requires obedience to all lawful commands.”

The freedom of speech and protest which Obama is heralding are surrendered by our armed forces to ensure the rest of Americans can benefit from them. While it might be easy to disparage Obama over his speech, he did not say troops should criticize the president, he said we live in a society where that is an accepted norm. Further, Obama is not the first president to speak of the values of our free society to troops.

Former President George W. Bush spoke of the value of free speech as a “non-negotiable demand of human dignity” at the West Point graduation on June 1, 2002. He spoke similarly in 2003 aboard the USS Abraham Lincoln and in 2005 at an Idaho military personnel gathering where he explained that a post Saddam Hussein Iraq would, “like our founders, they will come up with a system that respects the traditions of their country and guarantees the rights of all their citizens. They understand that in order to have a free democracy, you must have minority rights. The will of the majority, coupled with minority rights and human dignity and rights for women is important for a free society.”

Most presidents use the values and freedoms of American society as a reminder to soldiers of the importance of their fight. Simply because military personnel surrender some of their freedoms does not mean that they are not still fighting for others to have them. A reminder of the reasons for their fight should not be viewed as a fight against Trump or a dismissal of his authority, rather it was an appreciation for the willingness of our veterans and active service members to risk their own rights for their nations.

Obama should remain conscious and considerate of our nations heroes, and in this instance, he has. Now conservative media ought not use a moment to honor our veterans as a moment to pursue their own anti-Obama agenda, when there are certainly more than enough meaningful allegations to be made that do not invoke the troops or silly theories he is telling troops to disobey Trump’s orders.

So if D/liberal whiners are “special snowflakes”, what name shall we give R(?)/so called conservative whiners? Talk about seeing a bogeyman around every corner, sheesh.

An election was just won, how about acting like it.

Thank you Ms. Castro for calling out the knuckleheadedness

And yet Obama and Clinton are launching an all out attack on Trump. It is very hard for me to believe that this talk before the was not just another all too clever attack and all too dishonest attack on the integrity of the President as Commander in Chief. After watching Obama for 8 years, I find nothing that he will avoid if he gains some political advantage.

You write: ” Now conservative media ought not use a moment to honor our veterans as a moment to pursue their own anti-Obama agenda, . . .”

Your suggestion will fall on deaf ears. That’s what the “conservative media” has been doing for eight years. Why should we expect them to stop now? “. . . pursue their own anti-Obama agenda, . . .” — that’s what they do.