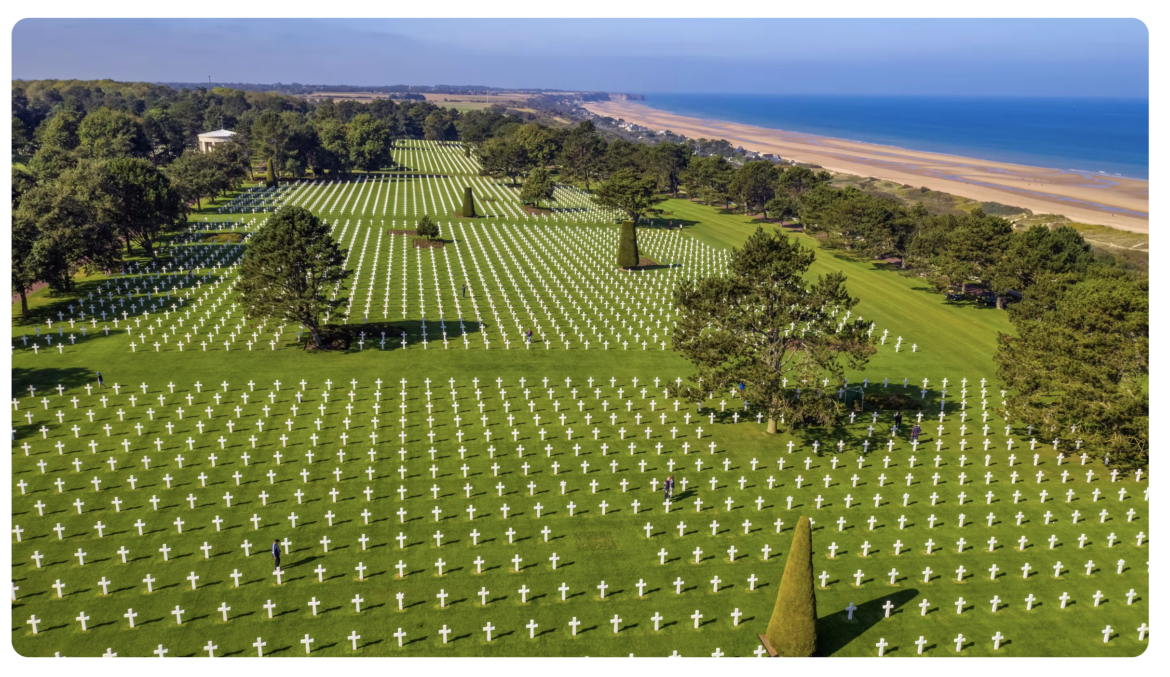 Like most of us who are in the twilight of our years there comes a realization that life on earth is finite. As Benjamin Franklin stated only two things are certain – death and taxes. This year we visited France and the highlight of the trip were the hours we spent on the beaches of Normandy the site of the Allied landing on June 6th 1944.

This was the first step in defeating the scourge of Nazi Germany. Codenamed Operation Neptune and often referred to as D-Day, it was the largest seaborne invasion in history. Aside from the logistical challenges that had to be overcome, American troops had yet to be tested in a strategic campaign against the professional  German Army which had been at war since 1939 across Europe and North Africa.

Upon arriving on the beaches, one realizes what a sheer nightmare it was to have landed against a fortified beach against a determined foe.  Allied casualties that morning alone there were over 10,000  with 4,414 confirmed dead. One can only imagine the sheer terror running through the minds of young men who only months before had been on a farm here in the valley like the Bedford Boys where Bedford VA became defined by the sacrifices of its citizen soldiers as nineteen young men perished that morning.

The impact of the landing at Normandy really hit home when you visit Allied Cemetery where over 10,000 men and yes women are interred. The cemetery is located above the cliffs and its shear impact is apparent as your turn the corner and are struck by the visual impact of 172.5 acres of pristine white crosses and Stars of David marking the dead.

Its impact is overwhelming when you consider the sacrifice, agony, and pain not only of those interred but of the families and loved ones left behind. While we were there by chance a World War II P-51 Mustang circled overhead and tipped his wings in solemn tribute to the fallen comrades below. A wreath was then laid and Taps played – If a tear did not come to your eye at this point you are not human.

My wife and I each gathered a bag of sand that day from Omaha Beach. Hers will be scattered on the grave of her father a World War II vet interred at Arlington National Cemetery among other members of the Greatest Generation.  Mine will be scattered at Bedford VA as a small tribute to the Bedford Boys sacrifices and bravery against overwhelming odds.

During the day spent on the beaches where so many sacrificed without hesitation, we often had French locals come up to us and thank us for the sacrifice of our veterans from the Greatest Generation which will soon be no longer. As they told us time and time again “we are the children that  those who died never had and we will never forget how America came to our rescue.”

As we boarded the bus after a long and emotional day, I could not help but recall the refrain of “The Battle Hymn of the Republic.” Where 100 years before over 360,000 soldiers died to free 4 million fellow Americans from slavery.

I was especially proud to be an American that day – in spite of our flaws we remain a unique nation blessed by our altruism and self-sacrifice – we stand alone among others. Although we may a nation more divided than united, may God bless and protect America forever the home of the brave and the land of the free.

Today there is a picture from Camp Lejeune. From the mess hall… a marine is wearing a dress and pantyhose.
You think that this sort of military is going to win a next war really? But what a pride parade the military will stage… it will be fabulous!!!

Yes sir… that was then. This is now. You might have seen the video of the 100 year old Marine with the row of medals on his chest he earned in the Pacific… He tearfully exclaimed… This isn’t the country we died for. It is a weird polyglot dumpster fire… Soon enough drag queens will be captaining ships. A navy that is one disaster after another.
Ships hitting merchant ships
An F18 just got dumped off a carrier in a storm
A sub hit an underwater mountain off the coast of China.. alerting the Chinese to its presence… they were pissed.
A ship was burned by a disgruntled sailor
A female pilot crashed her jet… and died
Then you have the disasters of twenty years of wars that have been lost. AND Now….
The same feckless dumbass neocons have led the US into a foolish showdown with the Russians economically… fighting til the last Ukranian…
The men who fought WWIJ… not drag queen clowns… do not exist anymore. See the first comment about the WW II Marine.
The stupid permanent political class better understand that. You perhaps may have seen the low level of recruits that the armed forces have to take. Army units cannot run recruits in training because they risk broken bones due to low bone density… and being too overweight and out of shape… twenty year olds…
The Russians whom the Deep State wish to fight so much are still hard people… So are the Chinese. These people work in real man’s jobs…steel mills, farms, factories… The US” fading technological advantage won’t win those future wars against hard people…
You might wish to go on youtube and watch the contrast of recruiting videos… The patriotic Chinese videos and the hard Russian recruit… and the US is recruiting with? Emma and her Two Mommies… I believe the hard ass Chinese and the Russians are going to kick Emmas ass…they don’t care about Emma’s #$$ing pronouns.. I’ll bet soon enough the intersectionality flag will be flying from the masts, no?
So enjoy the past… it is all the US has..

Very nice piece. Also, thank you for getting the Civil War US casualties figure correct.

Eric, thank you foir the kind words and keeping me honest !