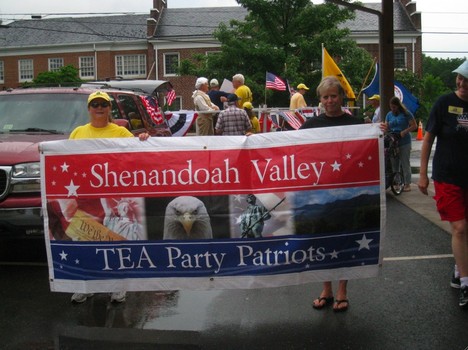 Northern Shenandoah Tea Party Weighs in on Elections 2015 and 2016

I must highlight a few meaningful news/opinion pieces that caught my eye this past week. A couple of them focused at the National level. Another in the Richmond Times Dispatch article for us here in the Commonwealth, & the last one in my hometown paper.

A good piece from Breitbart. One third (1/3) to one quarter (1/4) of Republican voters are ready to move away from the GOP. You don’t have to look far to see this. The Winchester City Commonwealth’s Attorney race. Two independents, one Republican & no Democrats. Same with the Frederick County Sheriffs race. Two independents running for Frederick County Supervisor. Now we hear the State RPV is designing a “loyalty oath” for the Presidential Primary. A direct attack on Donald Trump? The 10th District just gave away a “party-run” process to Freshman Barbara Comstock. We have to thank Chairs Beau Correll & Andy Robbins for that vote. Any conservative happy with Rep Comstock’s voting record.??

Peggy Noonan has an article in the Wall Street Journal concerning Donald Trump. I hope you can read this on the WSJ site as it has a subscription policy & sometimes it is difficult to review it without being a member. Anyway… it was a subject of discussion on the Limbaugh radio show as well as the Breitbart News on the Patriot channel. In her summary she states…

“An odd thing, in my observation, is that deep down the elite themselves also think the game is rigged. They don’t disagree, and they don’t like what they see—corruption, shallowness and selfishness in the systems all around them. Their odd anguish is that they have no faith the American people can—or will—do anything to turn it around. They see the American voter as distracted, poorly educated, subject to emotional and personality-driven political adventures.”

I say, we TEA Party, Constitutional Conservatives, Liberty-minded Patriots, have been on the crest of this movement. We are not the uninformed electorate, we are not the elite crony capitalists. We have recognized that our Nation is no longer the place where we can raise our families with the hope of continuous improvement in our way of life. LIBERTY

Did you see RPV Chair John Whitbeck’s comments in the Richmond Time Dispatch?? He was describing the GOP as the party of Virginia’s future. Nice comments and worthy efforts of “expanding our party to new communities and bringing our message to everyone who will listen.” While my perspective is limited to our little enclave here in the “Top of Virginia”. I have serious doubts about the direction of the Frederick County Republican Party. It seems to me that their “expansion” is tilted to the LEFT. No warm embrace of the liberty oriented conservatives in the TEA Party. No acknowledgement of those Libertarians in our community. In fact there is no recruiting program whatsoever. “Keep it Small, Control it All”!!

However, Open Primaries seems the new process to embrace by those in control. If the long-time establishment, crony capitalist, are to maintain their position of power & focus on incumbency re-election, the Dems are their partners. What better way to hold the “Limited-Government”, “School-Choice”, “Free Market” advocates at bay!!!

You are going have a few choices on the ballot this coming November. Choose wisely. In fact your best choice might not be on the ballot. WRITE-IN???

Hope you caught the rhetoric provided by the Fred Co. Back Creek Supervisor in the Win Star on Saturday. Nice words & makes me wanna smile, a little bit. Just keep in mind that Mr. Lofton is the Chair of the Public Safety committee. His oversight has led to the current situation

Fire & Rescue: Going in more debt by “taking over” bankrupt fire stations and building new ones. The Fire Chief wants to build eight (8) new stations over the next ten (10) years, hire over 50 new employees and double the budget in one year. Then we find out the response times used to develop this plan were FALSE. Where is the leadership??

Additionally, he has affixed his signature to the Capital Improvement Plan that includes a Parks & Recreation department that has doubled their budget & is proposing a $15M swimming pool, while our local officials are struggling to find water sources for our future. Can you say “Core Government Functions”? Swimming over Drinking!!!

How about the tremendous increase in School Construction. Do we really need to build the most expensive HS in Virginia for $90M?  Where is the call for alternatives? Has Supervisor Lofton asked for a study on expansion of the existing three High Schools? Could this be a better alternative? Why not??

The County has had year after year of budget surpluses and where have they gone? Increased spending!! All of the members on the Board are Republicans. I assume that means they believe in… Lower taxes; Less and smaller government;

You will have a choice on Election Day.!!!

Most of these comments were meant for our local “patriots” here in the “Top of Virginia”. You may not have an understanding of our local Board of Supervisors election. However, I wanted to include it as what I see is a failure in the Republican Party, top to bottom. I just caution the “Party Elite”, don’t abandon your base.

Jay, I agree. The Republican Party in general is out of touch and even more so in Virgina. It is a disaster run by the “elite” who know better then we “hillbillys” “rednecks” in Southwestern Virginia.and they care very little if any for anything we have to say or constructive remarks. I see

more and more supporting and voting for the person rather then the “picked by party leadership”. I work every week now as an independent to get others to become independents and only simply because we are out of the elite loop of the Party.

Well said Jay. You’re fighting the good fight in Frederick. Problem is 100% party leadership. And they do abandon their base each chance they get. There is no better evidence than McConnell allowing for the funding of Planned Parenthood in DC. If we can’t get on board with an issue where 80% of the US agrees with us……..

Shame it has to be a “fight”. I didn’t join the Republican Party for a specific candidate. I joined because of their Creed. I have said time & again, if the GOP was properly representing conservatives, there wouldn’t be two TEA Parties in Frederick County