Corey Stewart defeated Nick Freitas and EW Jackson Tuesday night to become the Republican nominee for the US Senate and the map this race left behind has left many Republicans baffled by what happened and what can be learned.  The biggest takeaway was the incredible performance Stewart delivered in Northern Virginia, particularly voter-rich Fairfax and Loudoun County. What is even more incredible is when you compare it to the 2017 gubernatorial primary between Stewart and Ed Gillespie.

From the start, this race was destined to scramble the electoral map of Virginia primaries.  For the past generation the breakdown between grassroots conservative and establishment Republican has been fairly clean and what you would expect.  Candidates like Bob McDonnell, George Allen and Ed Gillespie did well in Northern Virginia and suburban Richmond while outsiders like Stewart surged in the rural hinterlands.  However in this race there was no establishment candidate and the three candidates were various shades of red – Freitas a younger libertarian conservative, Stewart a staunch MAGA devotee, and EW Jackson as a classic social conservative firebrand.  The big question was where would the McDonnell/Allen/Gillespie Republicans go? Would they even vote?

Turnout for this election was down from 2017 so there were definitely Republicans that stayed home. Except for one district … Virginia 10, driven by a robust challenge to Barbara Comstock by Shak Hill. Drilling down into Loudoun and Fairfax counties, you see the story of this election. 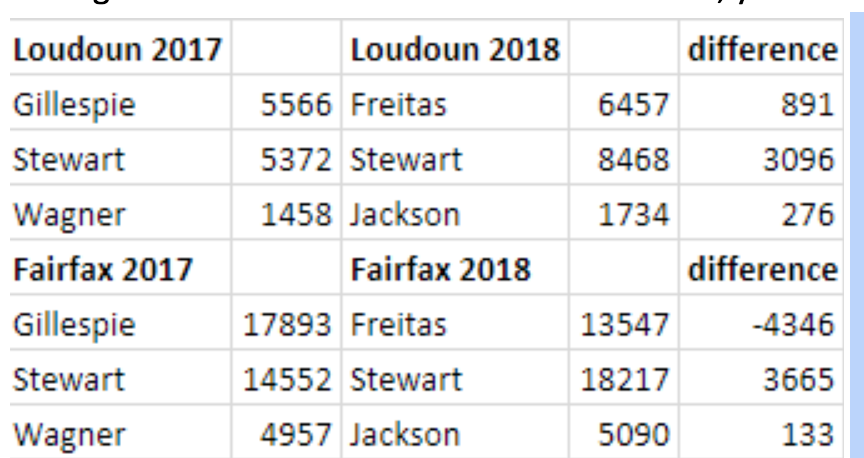 In the two most important counties in Northern Virginia, not only was overall turnout up but Freitas drastically underperformed Gillespie while Corey Stewart picked up a net 6,761 from last year in these two counties and the margin of victory for Corey statewide was 5,237.  What happened is the congressional primary in the 10th drove up turnout from 2017 to 2018 by about 25% and the higher turnout went to Corey Stewart. There was no correlation between Freitas/Comstock and Stewart/Hill like one might assume. Both Comstock and Hill drove up turnout FOR Corey Stewart!  It’s a bizarre phenomenon that requires some digging in to. Even more shocking was the net loss of 4,346 votes from Gillespie to Freitas in Fairfax County. That means that Ed voters last year either went to Corey or didn’t vote at all. I suppose many of the establishment wing in Fairfax who either didn’t vote or left that part blank might be regretting it.  If you are one of those, let me just politely say you are a buffoon and I don’t want to hear one complaint about Stewart from you.

I do have one thought off the top of my head.  Northern Virginia Republican primary voters tend to be older baby boomers and that generational divide went against the younger, more libertarian Freitas.  These are voters that like Trump and whose issues are more likely immigration than a 20 minute stump speech on liberty. Neither candidate spent very much money so I think a lot of Republicans energized by Comstock and Hill voted name ID, and that was Corey.  The Freitas campaign made a huge mistake but not more directly engaging Northern Virginia through mass mailings and other forms of mass contact like robocalls to up his name ID and get across his background and message.

The larger lesson for RPV continues to be what it has always been.  The party and statewide candidate’s engagement in Northern Virginia has been pathetic.  Local committees are often left to fend for themselves and successful Republicans in the region both past and present have succeeded in building their own local organization outside of the party infrastructure.  There seems to be an almost cultural resentment against Northern Virginia that drives Republicans downstate from fully engaging Northern Virginia. Nick Freitas had an incredible opportunity to come to Northern Virginia and win this region just based on not being Corey.  But in order to connect with Northern Virginia primary voters, who skew older, you need a robust robocall and mailing plan to get your name out. Personal events, social media ads and word of mouth don’t work here. This region is enormous, and I genuinely think many downstate don’t understand how large it is.  RPV needs to dedicate paid staff and a satellite office in Northern Virginia to build up an accurate voter database, conduct outreach, organize and just reach out. Corey did in fact do this, which is why his numbers went so high. With all due respect, you can’t run in Northern Virginia like you run a delegate race in Culpeper.  It requires money and organization, and I think the Freitas campaign will look back and kick themselves that they missed an opportunity.

These results also beg the question if Corey Stewart might be a stronger candidate than he appears to be.  We all know his negatives, that goes without saying. But his victory map is one I haven’t seen before, Corey won by winning rural Virginia and suburban Northern Virginia.  It also must catch the attention of Barbara Comstock, who’s going to need every single Republican vote possible to fend off Jennifer Wexton.  In a vacuum, a political alliance (however low-key) between Comstock and Stewart could help both of them given the division in the 10th nicely mirrors Stewart and Comstock.  Don’t get me wrong, I think Tim Kaine is winning but I think Stewart will do better percentage-wise than Gillespie did. Corey clearly has a motivated constituency and a career of intriguing successes in Northern Virginia that break the normal Republican paradigm in Virginia.

For those outraged by Stewart’s victory, particularly downstate Richmond types who have long ignored/hated/resented Northern Virginia’s power and turn to blue, I hope this is finally your wake-up call.  Northern Virginia has millions of voters, and year after year statewide Republican candidates do everything they possibly can to win without us. It’s impossible and we’ve fallen so far behind the solutions aren’t easy.  It will take money, organizations and patience to re-engage the voters of this region.