Recent reports regarding unaccompanied minors crossing the border illegally suggest that Northern Virginia is the final destination for many, and that the federal government has set up a system that encourages illegal immigration of minor children. 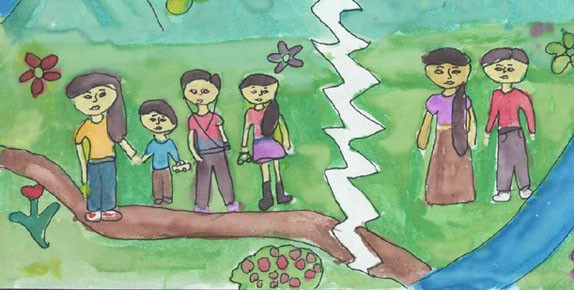 “The Washington, D.C., region is drawing a number of the children caught illegally crossing the border because it is home to an estimated 165,000 Salvadoran immigrants, the nation’s second-largest population after the Los Angeles area’s 275,000, according to the Migration Policy Institute. The capital region had 42,000 immigrants from Guatemala and 30,000 from Honduras.” Source. [read_more]

For the first six months of 2014 30,340 unaccompanied children [“UACs”] have been placed with sponsor families. These are children placed directly with family members outside of the detention/processing facilities. Of these, 2,234 were placed in Virginia making it the fifth largest destination nationwide. 2,205 were placed in Maryland. 187 were placed in D.C. All told the DMV is home to 15% of total nationwide placements of UACs. Source. 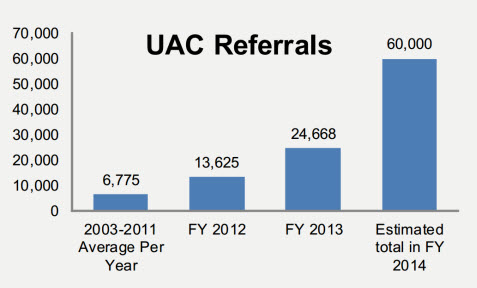 Why placement with sponsor families?

According to the DHHS Administration for children and families:

“Under the Homeland Security Act of 2002, Congress transferred the care and custody of UAC to HHS from the former Immigration and Naturalization Service (INS) to move towards a child welfare-based-model of care for children and away from the adult detention model. In the Trafficking Victims Protection Reauthorization Act of 2008, which expanded and redefined HHS’s statutory responsibilities, Congress directed that UAC must ‘be promptly placed in the least restrictive setting that is in the best interest of the child.’ See 8 U.S.C. § 1232(b)(2).” Source.

Essentially, if you immigrate to the U.S. illegally, and happen to be 17 or younger you avoid traditional INS enforcement and are placed into a system seeking to meet your “best interests.” Treating children with compassion is a laudable goal, but how could this not create the perverse incentive for parents to smuggle their children hundreds of miles away from home under somewhat unknown, but horrific conditions. The results of these policies are more obvious year after year.

Utilizing a Bush era determination under Attorney General Ashcroft some DHS agents are declaring mothers and children threats to national security in order to deny them bond. Source. Parents and children caught crossing the border illegally will be detained pending hearing and deportation.

A child separated from his or her parents, and placed in the hands of human traffickers will have his or her best interests taken into consideration by the U.S. government, whereas the child with a parent suffers detention and deportation. The U.S. is actively encouraging parents to send their children here unaccompanied.

Seems perfectly fitting. After all NoVA – having a large fed gov workforce along with their contractors – tends to be very liberal. They voted for Obama and his promise to fundamentally change America. It’s only right they now get to “enjoy” what they wrought! Hope they like sharing their communities – neighborhoods, schools, churches, shopping centers, etc – with all these new illegals and their 3rd world diseases. And what will these illiterate kids do to the high tests scores of Fairfax Co. public schools? You can just bet these illegals kids do NOT have to provide proof of immunizations prior to being allowed into the schools (like everybody else has to).

Choke on it, NoVA. I wish these hordes of illegals were only sent to liberal areas of the country. (I do feel sorry though for the relatively few non-liberals caught up in all the mess there. It’s a shame they must suffer what they don’t deserve.)

If the Republicans do not push for a secure border, they are history. Secure the border! period!

Actually Lynne having worked on this issue for several years, it is not “Secure the border!” period!” First and foremost it has to be “Secure the Integrity of Federal Workforce.”

Notbent voices a familiar refrain among conservatives and libertarians, but despite containing an element of truth, that position is one of the most counterproductive, dangerous positions that opponents of the certain policies of the Democratic Party could take.

It opens up the possibility of the Federal workforce becoming nothing more than a giant spoils system, and it is just not the Executive Branch it is all three branches of government which are imperiled. The Democrats can’t help themselves that is their approach to governance.

The Republican response over the last several years, for more than a decade, has been totally ineffective in countering it. Damn them all to Heck is not an effective response and neither is an alternative which some members of the Bush administration tried – “We’ll counter with our own patronage networks,” while telling themselves that at least their networks will put country, not Party first.

Well, the Dems weren’t going to fall for that one by the Bushies, instead what the Republicans , Conservatives and Libertarians should have been focusing on is the integrity of the Federal Workforce which expanded tremendously after 9/11, the failure to do so has resulted in the meltdown we are now witnessing not only at our borders but seemingly in everything our public servants attempt to do.

But, but, but…. as it typical for our esteemed leftist friends… let’s take all those poor illegal alien children (illegal immigrant? BS… call it what it is!) under our wing. But just don’t put them in my neighborhood… and I certainly don’t wanna pay for it.

Silly libtards fail to comprehend the fact that you can make big fed pay for it all you like… but in the end WE ALL as tax payers are on the hook for this. And by dumping these aliens on the local infrastructure, the local governments must foot the bill for education, social welfare, etc.

O’Malley wants his cake and to eat it too….

No matter how much people want to pretend and delude themselves the world does not fit in a village.

As the Governor of Oklahoma points out below there comes a point where logistics and reality clash with the safety , well being and sanity of your own community.