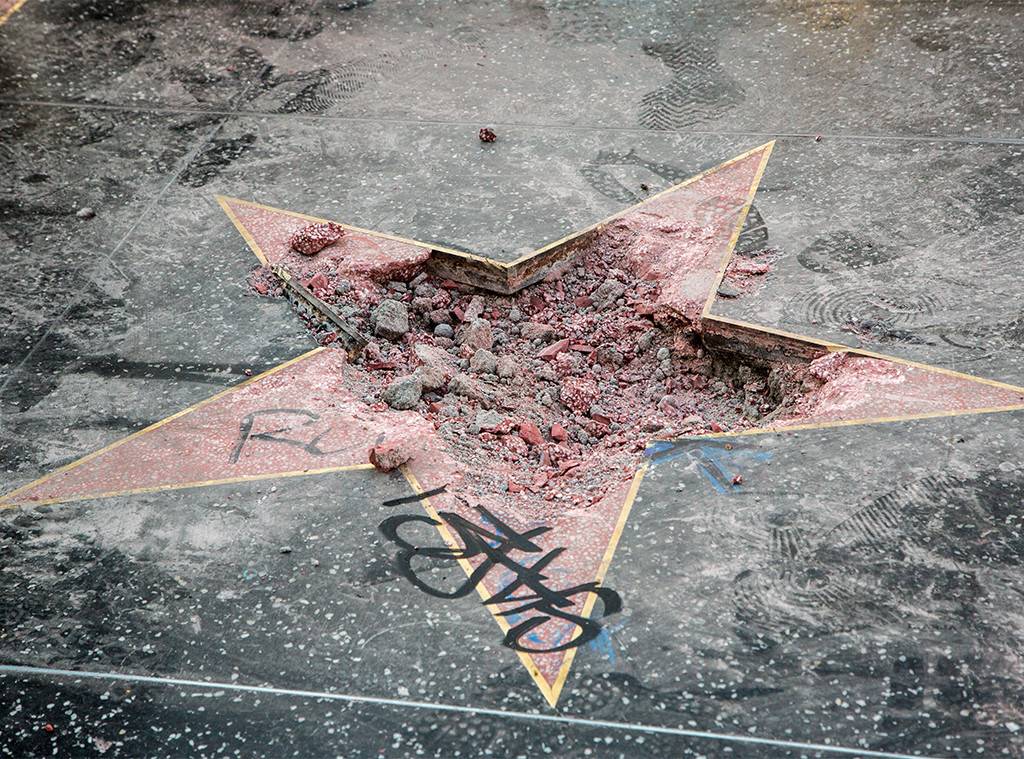 Not Guilty by Reason of Insanity

“A man who took a pickax to Donald Trump’s star on the Hollywood Walk of Fame early Wednesday has turned himself into police, authorities said.” reads a story in the Los Angeles Times. The Times continued, “The man strode up to Trump’s star off Hollywood Boulevard and Highland Avenue about 3:30 a.m. and proceeded to destroy the majority of it, including bashing through Trump’s nameplate, police said.”

Under the Model Penal Code rule, a criminal defendant is not guilty by reason of insanity “if at the time of such conduct as a result of mental disease or defect he lacks substantial capacity either to appreciate the criminality of his conduct or to conform his conduct to the requirements of the law.”

Trump Derangement Syndrome strikes again with supposedly rational, normal people pushed to the breaking point by the presidency of Donald Trump. The man who defaced the President’s star turned himself in and will likely be charged with a felony, but will TDS be his defense?

Whoopie Goldberg went nuts on the set of The View when a guest suggested she was a TDS sufferer. Goldberg then went on to prove the guest’s point by chasing the guest out with a much-reported, profanity-laced tirade.

Liberal politicians are loathe to criticize these TDS incidents in order to give the sentiment legitimacy. “Poor Whoopie couldn’t help herself, this President is so terrible and threatening to democracy, how could she stand by while the guest supported him?”

This is the impetus that causes TDS to gain momentum as acceptable. I see it every single day. Not only online, but in the so-called mainstream media with the premise that the end (getting rid of President Trump) justifies the means. The means is whatever route necessary.

The hatred is actually palpable when dealing with people who have immersed themselves in this culture of “Trump is a monster.” They surround themselves with like-minded people, marginalize people in their lives who disagree, and then assume a vast majority agree with them.

At this point, a TDS sufferer becomes what we call unhinged. Opinion becomes fact. Their life begins to resemble dark black-and-white Twilight Zone episodes in which the villain Trump is an amalgam of all the worst tyrants in history, past and present, while imagining themselves and their Trump-hating compatriots as the heroes. The Resist Trump movement is in their minds, akin to the Nazi resistance fighters of World War II.

Since the real Hitler died a long time ago and that comparison has been so overused by the left for the last 30 years (I remember Reagan critics using it), they feel the need for a more modern bogeyman, a tyrant with more currency. And they’ve found one in Russian President Vladimir Putin, whom they insist conspired with President Trump on a hacking scheme to help the Trump Campaign win the election. Despite zero evidence that the Trump Campaign colluded and the Deputy Attorney General saying no Americans were involved, the movement persists.

The problem is that TDS is not losing steam, it is getting worse. When they fail to flip the House to Democratic control in November, what will be next? I hate to say this, but I think more violence will occur. This is the final stage of the TDS epidemic—actual violence against a democratically elected president and his supporters.

I believe it would be entirely possible for this affliction to drive an assassin’s “taking one for the team” mentality and then try the John Hinckley defense, not guilty by reason of insanity. It should scare us all to think of that degree of delusion, even if you dislike the President.

I don’t know who can ratchet down the rhetoric from the left. I don’t think a Clinton or Elizabeth Warren or Alexandria Ocasio-Cortez would even try. They need that passion to achieve their socialist dreams. Unless a cure for TDS is found, I fear that horrific violence is where we are headed.

Not Guilty by Reason of Insanity was last modified: July 25th, 2018 by Frank McDonough

So, in your own little man way, you condone and support violence.

Well, I am not advocating for a good guy Nazi to run over people in his car or anything…

No, you are actively promoting and encouraging the destruction of property to make a political point. How Democratic of you.

I strongly suspect that you ARE advocating for violence against peaceful protestors, with the express purpose of inflicting injury and inciting a riot, to include violent self-defense. You must be very proud to have blood (and urine, and paint, and blood) on your hands.

No, those are the right wing dogwhistles you are thinking of. The ones that encourage the skin-head CONservatives.

No wonder you don’t post under your name. Being complicit in criminal and sometimes treasonous activity bears serious consequences. Fortunately, you will only succeed in delaying them, and not in ultimately escaping them.

I am afraid that I must disagree on this point – this thing is not a little man. He is not a man at all, and not much of a boy.

The country has been moving towards sectarian violence for a while now (since W?) and I don’t see that stopping.

I can’t even imagine how unhinged the left will become if Trump gets re-elected.

What syndrome is it when CONservatives cause economic damage to American farmers by starting a trade war then try to solve their blunder through a welfare offering?

It appears that you haven’t been keeping up with current events.

He never does. Just trolls away.

Hmmm, I guess my feed has missed where Trump has retracted his $12 billion farmer welfare package. You want to provide a link?

There have been many questionable farm “subsidy” packages in the past. This package is not a subsidy – it is a reasonable, fair, just, and most importantly strategic effort to sustain America’s agricultural might while combatting the decades old inequities that have been piled upon America’s shoulders.

Straw man? Really? So what part of the Trump tariff induced agricultural bailout welfare package am I misrepresenting? Please do clarify.

As a thought experiment, I am beginning to wonder at what point is the line crossed between freedom of thought/speech and becomes a threat to our Constitution and the Rule of Law. That means, if I am not mistaken, that citizens pushing a political system masquerading as a quasi-religion or a progressive political party consumed with Marxist Socialism/Communism ideology, which cannot coexist with our Constitution, becomes the enemy that the oath I swore to uphold, when I joined the military, to defend the country from enemies both foreign and domestic?

Are we all frogs setting in a large pot of water that is comfortably warm, but getting gradually hotter? When we finally decide that the water is way too hot, it is to late. Allowing leftists to hide behind TDS or mental defects as they try to destroy our country is not an option.

I think we know where we are. The only question is what event will pull the trigger. In Western, the hair trigger is moving and their is realistically nothing to stop it.

Oh! Do tell. Where are we in your opinion?

And now we got Wacky Maxy Waters saying that God told her to get Trump, whatever TF that means.

It was the age of reason…

Maybe you should ask the wacko right wingers who say Trump was elected by God.

Calling them crazy gives them too much credit, and as you suggest, too much cover.

While some in the great unwashed masses who swirl about their resist leaders may, in fact, have “lost it,” those leaders and much of their hierarchy and overall framework know exactly what they are doing. Just like Mad Max, who is culpable for much violence, now, and in decades past going back at least to the LA riots.

It’s time to start enforcing the law, vigorously. Beginning with those with their damp hands on the levers of law enforcement in all its forms, perverting its tools and its purpose to “resist,” a polite term for revolt, and treason.

Perhaps the first wall that Trump needs to build shouldn’t be used to eliminate illegal aliens, but to eliminate citizens committing illegal acts.

And a Trump staffer was kicked out of an Arlington, VA restaurant. The place was Don Tito. Apparently they don’t like conservative money so best to avoid the place.

Or maybe they don’t like drunk jerks, who knows?

Quite an accusation about a public official in an important post. Please, share the details of their public intoxication.

“Who knows?” Big if true

No, Chris. The fact that you are a murdering heroine dealer would be big, if true.

The “if true” veil behind which you and yours hide is despicable. Just keep throwing mud, just keep “resisting,” just keep trying to depose a duly elected President. The only true thing that you are illuminating is your disgusting tactics.

At least do these things under the flag of your own (real) name. Or perhaps you don’t know what your real name is? That might explain a lot.

I learned the strategy from our favorite orange wannabe dictator. A brilliant guy.

He’s brilliant. You are no doubt an accident.

I see you’ve studied his strategy of do nothing but insult people, while looking like an incoherent moron, well played sir.

It’s sad when speaking the plain truth is considered an insult.

Entirely not enough heroines to tolerate even one offing.

Look at the pattern and content of their posts — they shill, we call, they obfuscate and deny shallow alinskyite.

Don Tito has been asked to explain their decision. Not unexpectedly, they remain silent to this point. After all, if the word gets out, they might lose paying customers.

How are all these staffers being identified on sight? Have the democrats starting putting up wanted posters or something?

You leave work with your name tag ID still on. Happens all the time. Also, Arlington is a leftist paradise so some leftist may have pointed him out.