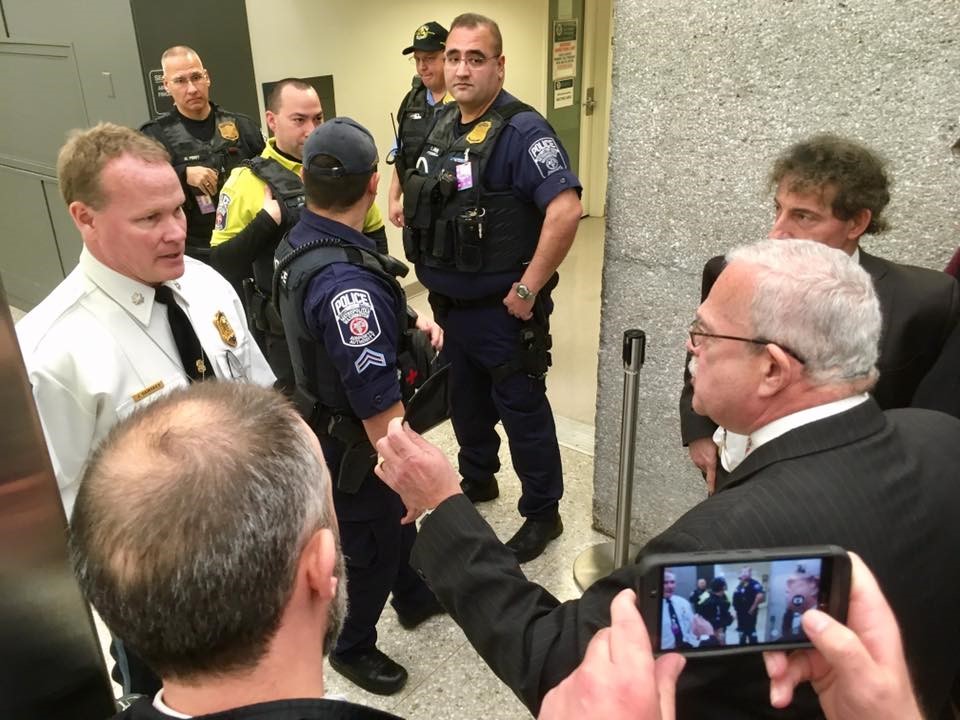 (Not so) Breaking News: Gerry Connolly supports greater restrictions on refugees coming from Syria and Iraq

President Trumpâ€™s Friday Executive Order sent airports into chaos this past weekend as citizens of the seven banned countries were detained at Dulles International Airport.Â  The no borders/one (or no) world government left descended in droves to protest and demand the release of detainees.

Congressman Connolly â€œchampion for the little-guyâ€ began ranting Saturday and went to Dulles Sunday to demand that he himself access the detainees.

Non-citizens are not â€œconstituents,â€ but that probably doesnâ€™t matter to Connolly.

Connolly goes to Dulles Airport and â€œdemands to see the detainees.â€

He then went on to call somebody at Customs and Border Patrol and accomplish nothing (Twitter):

ALL THE WAY back in November 2015 President Obama was trying to keep the then current refugee system in place despite Congressional action in the wake of terrorist attacks in Paris.

HR4038 was designed to increase the scrutiny on refugees coming from Iraq and Syria by adding an additional FBI vetting process that did not previously exist.

Gerry Connolly was one of 47 Democrats who voted for HR4038 that passed the House by overwhelming margins before being killed on a cloture vote in the Senate.

When given an opportunity to explain his vote, Congressman Connolly stated he supported the measure once he determined it â€œwouldnâ€™t substantially hinder the [refugee] resettlement plan.â€

I guess adding restrictions on entry does not hinder refugees from entering the U.S. or something…

If I were a full throated liberal I would be far more upset with Connolly, than proud of his behavior.

My notes on the EO:

The Executive Order was poorly thought out in that Legal Permanent Residents and anyone else who has already completed a vetting process should not have been detained.Â  Legally it was required under the EO.Â  In recognition of the need to put the issue behind the Administration, Secretary Kelly of DHS issued the following proclamation almost 48 hours after issuance of the EO:

In applying the provisions of the president’s executive order, I hereby deem the entry of lawful permanent residents to be in the national interest.

Accordingly, absent the receipt of significant derogatory information indicating a serious threat to public safety and welfare, lawful permanent resident status will be a dispositive factor in our case-by-case determinations.

The EO should have been drafted differently, and briefings with Customs and Border Control agents on-the-ground should have occurred prior to issuance of the EO.

(Not so) Breaking News: Gerry Connolly supports greater restrictions on refugees coming from Syria and Iraq was last modified: January 31st, 2017 by Paul A. Prados

We don’t have any business accepting refugees or illegal immigrants from any place. We don’t have decent jobs for the people who already live in this country.

RR, I agree with you on immigration, but Trump has been in office for all of ten days now. He has reversed disasterous policy on immigration set forth by that Retard W and Obama. He has a Sec of DHS committed to border defense, not immigrant resettlement with the help of DHS. He moved the wall further than anyone F ing President has ever. And he set the tone that we aren’t going to be Germany on refugee admittance. All these people crying crocodiles tears over this matter ought to go look at the videos of what Paris looks like, the number of No Go Zones they have, the crime that is being hidden by authorities.

Trump also has to make good on the promise not to continue the W and Obama policies of creating refugees. What two complete idiots and Obama is held up as some sort of statesman with his vacuous speeches. He created as much destruction as the idiot W did.

I am with you though if what Trump has done so far amounts to show… but he has a real fight with liberals and RINOs here and their agents in the media… it takes guts to stand up to them.

Thank you, Paul Prados, for highlighting Gerry Connolly’s distasteful acting. If he didn’t have double standards he wouldn’t have any standards at all!