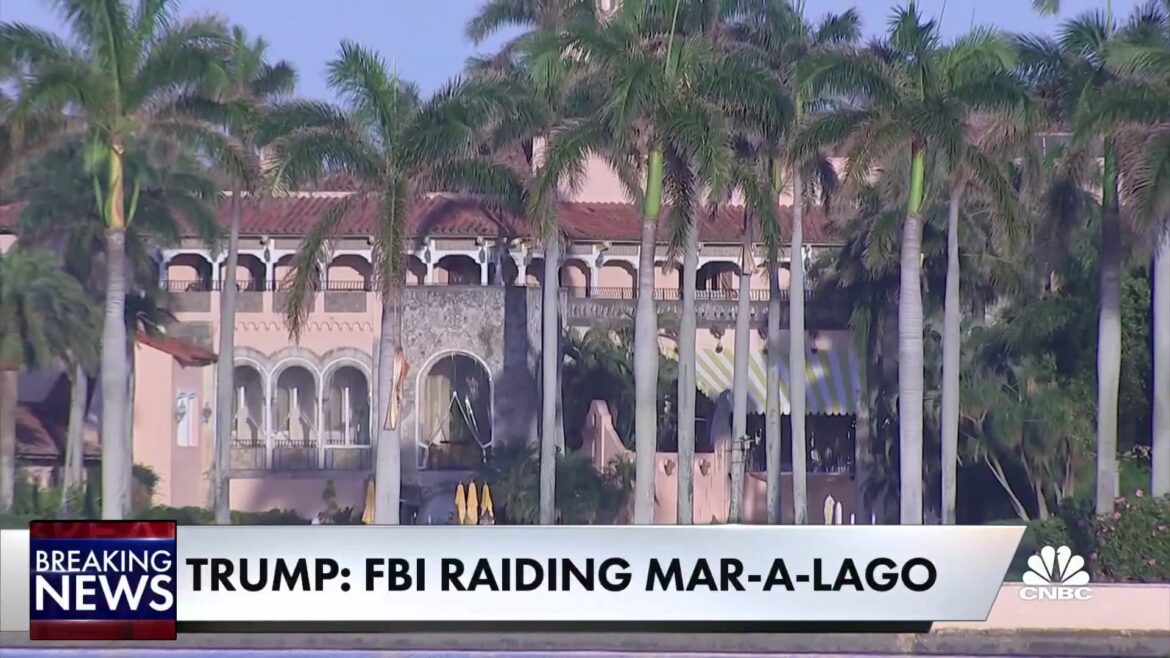 Yesterday, the FBI, with guns drawn, raided President Trump’s residence in Florida.  The news media has called this unprecedented – it isn’t.  Virtually every tyrant throughout history has suppressed their opponents by using force to intimidate them.  This raid is straight out of the socialist/communist playbook for tyranny.

Some have said the FBI will find something.  Does anybody believe that President Trump would be stupid enough to leave incriminating evidence laying around?  (Logically, if something is found it will have been planted in much the same way the Russian Collusion information was planted.)

The mid-term elections are less than 100 days away.  It is legitimate to ask whether they will take place or be totally corrupted.  I was not sure if the 2020 Presidential election was stolen even though I did a stop, drop and roll analysis showing that the sudden Bidden surge was improbable.  I am now convinced that an election coup took place.

At this point, I suggest that every American citizen call their Congressmen and ask them to issue a statement on this raid, and then put the essence of that statement on the internet.  I did that this morning and got a less than satisfactory answer “We are studying that”.  Congressmen, that is not an answer.

Ronald Reagan is quoted as saying that the most terrifying words in the English language are: I’m from the government and I’m here to help.  Now we know why.

Not so unprecedented? was last modified: August 9th, 2022 by Dr. Robert Warren

The Washington Post claims from an anonymous source that the FBI is looking for nuclear information. Of all the possible lies the DOJ/FBI with its media idiots can create, this is the most bizarre and ridiculous. No president just walks around with top secret nuclear info (think Biden for a minute0 – which is the most closely guarded and watched info. If the FBI finds something, they conjured it up. Desperation makes for very strange behavior.

The story has now changed. It was nuke info but signal intelligence info. The liars are spinning and folding back on themselves

She likely could raise millions as those clothes, like Monica’s semen stained dress, are now of historical importance. Stocking it to the corruptocrats in the FBI and DOJ would be poetic Justice.

The useful idiot trolls, Eric, John, and Virgil, have been given their marching orders to create an alternative story – and no lie is too outrageous. The Chinese curse “May you live in interesting times” applies.

No alternative story needed. It is simple enforcement of the Presidential Records Act.

Who is now talking about defunding law enforcement? Yes, that’s right, it is the Republican Party that’s threatening to cut law enforcement funding. The shame, the stain.

Talking isn’t doing unlike what has happened to police in many Democrat cities. Defund the Police is a Democrat idea not a Republican one. And getting control of or eliminating a renegade and lawless FBI ought to concern every American citizen – even you.

For the DOJ & FBI to be thought as credible they must now have to raid Bedminster, if not than any so called evidence found can be questionable as planted.
Even more over if Trump was or is so bad why is Garland leaving Bedminster unturned?
Either way he is piss poor law enforcement.

Turns out many of the documents the FBI seized were so sensitive, so highly classified, that the names or subjects of the document could not be listed on the warrant, which will be made public.

It’s clear what is going on here: Trump removed from the White House TOP SECRET SENSITIVE COMPARTMENTED INFORMATION dealing with ongoing US intelligence operations and sources. He intended to — and may already have — shop this info around to the highest bidder. On at least two occasions while running off at the mouth in the Oval Office, Trump revealed highly sensitive information to the Russian ambassador, on one occasion even revealing a very sensitive Israeli operation.

Trump took US national security secrets to sell to Putin and the Saudis in exchange for $$$ or for permission to build a Trump tower.

I guess none of you have heard about the $2 billion the Saudis invested with Jared Kushner — that’s the first installment from them in exchange for information Trump passed to them.

If you substitute Hillary for Trump, your comment would make some sense.

“Does anybody believe that President Trump would be stupid enough to leave incriminating evidence laying around?”

You really need to ask that question? “Yesterday” is a hard word for him…

Fraud is a hard word for you because it is what happened one day in November 2020.

“One of the saddest aspects of this raid is that no one in the FBI has resigned in protest of what is obviously a politically motivated action. This is unlike the end of the Nixon administration when two of his cabinet officials resigned in protest. ”

It iz not politically motivated

“Does anybody believe that President Trump would be stupid enough to leave incriminating evidence laying around?”

lol………..he leaves it in toilet bowls

“The Biden administration has said it knew nothing about the raid. Hogwash. The IRS was politicized during the Obama administration when the IRS targeted conservatives and conservative groups. ”
They targeted liberal groups, too, as well they should have. But republicans NEVER mention that

” I did a stop, drop and roll analysis showing that the sudden Bidden surge was improbable. I am now convinced that an election coup took place.”
Did ya now? Seems every court disagreed with you

The courts punted. Now, apparently, a couple of years late, the Supreme Court is willing to peek.

A Florida Representativ by the name of Sabatini has called for an emergency session of the legislature to – sever all ties with the DOJ and to arrest FBI agents who are not working with Florida authorities. This is not unprecedented as Democrats in states like oregon and washington have done something of a similar nature.

The super-democrat DC (home of the archives) grand jury would have no problem indicting President Trump–regardless of the evidence (fabricated?) or lack thereof.

The chaos is deliberately. Police are walking away and recruiting is way down. The military can’t recruit, Enlisted and officer corpse are retiring, and some have been fired for refusing mandates. Now the FBI will find itself losing those close to retirement and having recruiting problems as well. Local police and sheriffs are looking at whether it is appropriate to work with the FBI;. The IRS is being weaponized as is virtually every government bureau and agency.

So it’s a good idea for the few good FBI Agents to resign leaving only the bad?????? They need to ride out the storm until the traitor party is removed from power, then empty the FBI and rebuild it same with the DOJ!

So far, the presumption is that all of the agents currently in the FBI are corrupt. Silence is acceptance of corruption.

Less that 90 days out from the election and the Obiden Junta is going to pull every act that it can mustered to stop the red tide that is about to return control of Congress to the Republicans, especially a Congress led by populists. We can expect Trump to be indicted, brazen election fraud, billions in carefully nuanced propaganda. Eminent economic and political annalists like Gilder, Luango, Armstrong are predicting that 2023 will be a year of unprecedented chaos that will sweep across our land. Be prepared for the worst is yet to come.

“Be prepared for the worst is yet to come.”

I’m prepared. I bought another 400 AR-15 rounds today along with more shotgun and pistol ammo as well as match grade .308, accurate out to 800 yards.

Let the Proud Boys take to the streets. I love a target-rich environment.

When they come to seize you guns, they will now know what to look for. You are an idiot.

My hope is that even the safe democrats are defeated. They are part of this evil.