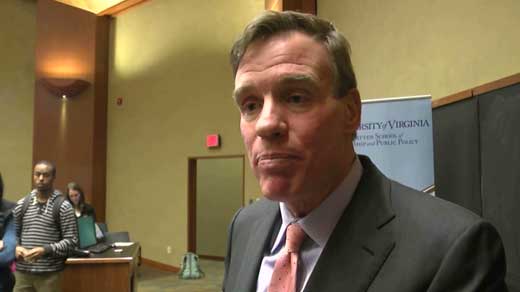 On April 15th of all days, Northern Virginia Community College (NVCC) dedicated their Annandale Student Services Center to Democrat Senator Mark Warner. This taxpayer-funded baksheesh  has become a common practice at NVCC, as several other buildings have been named for prominent politicians, mostly Democrats.

The irony is lost on the school that they are paying tribute to the wrong individuals.  To borrow a line from the president, Mark Warner didn’t build that.

Sure, he allocated hard-earned money from Virginia’s taxpayers to NVCC, but this ceremony is a metaphor for everything that is wrong with government in the Commonwealth. A former Governor and sitting Senator is to be treated as if he personally dug in into his over $90 million fortune to pay for what, in fact, you paid for. To do so on the day Americans traditionally associate with paying their taxes is as ironic as it is tone-deaf.

Governor Mark Warner paid for something with your money, and will be lavishly praised for it on Tax Day with a permanent campaign advertisement (also paid for with your money).  This is the plaque erected at the new building, for generations of young voters to drink in every time they seek “Student Services” on the Annandale campus:

Named in honor of U.S. Senator Mark R. Warner for his personal leadership and tireless dedication as the 69th Governor of Virginia to significantly expand investments in community college facilities throughout the Commonwealth of Virginia, including this building on the Annandale Campus of the Northern Virginia Community College.

This is in one of the wealthiest counties in America that happens to be that way because of its proximity to artful pickpockets in DC who dispense even more of your money than those in Richmond.

An observer could be forgiven for concluding this bestowing of taxpayer-funded gift upon Warner was a cynical move to designed to mutually benefit the parties: Warner burnishes his reputation in the Virginia donor community, and gets a permanent campaign advertisement, while NVCC gains the favor of Virginia’s senior Senator, and all the access to power and money that comes with it.

Delegate Rich Anderson (R-Prince William), weighed in on the WMAL Morning Show on Wednesday, saying that regardless of party or position, Virginia should adopt the practice of the U.S. Department of Defense and wait for a person’s death to bestow such an honor. Anderson cited legacy reasons, and the desire to make sure a complete record was available before making such a substantial, permanent decision. Such a measure would also ensure that no political favor was being curried in a vulgar pay-for-play arrangement. Anderson is absolutely right.

Do we want to tolerate the perverse situation where Mark Warner can take from you to pay for him, thus reinforcing his incumbency and cementing his legacy?

Let’s not forget that Warner’s vote for Obamacare has resulted in massive amounts of new debt and taxes that will be paid by Virginians for possibly generations to come. Let’s also not forget that every time Virginia students pay their higher tuition rate of $158 per credit hour—four times what it was when Mark Warner became Governor—they pay for capital expenditures that bear the politicians’ names.  This is a shameful cycle of publicly-funded graft that should come to an end.

So, it’s a Happy Tax Day for Mark Warner!  Bully for him.

For the rest of us, today’s events provide a vivid reminder of the systematized corruption facing champions of the taxpayer in Richmond and Washington, and of the crushing tax burden that continues to be placed on the shoulders of ordinary Virginians.

Perhaps were it not for the Cuccinelli or Jackson loses the previous year, possibly due in part to Sen. Ted Cruz reading Dr. Seuss’s Green Eggs and Ham, you may not have had to write this article??? We will never know.

We could have had Bolling. After all he’s Warners kissing cousin.