#1-  Providing a voice for Redskins fans and season tickets holders.

#2-  Supporting the Redskins franchise, a Virginia-based business that generates hundreds of millions of dollars in taxable revenue for schools, roads, public safety and other important public services in the Commonwealth.
#3-  Opposing the inappropriate involvement of the United States Congress in issues surrounding the Redskins franchise and its supporters.
#4-  Supporting commercial freedom in the Commonwealth of Virginia and the rights of businesses to their own brands and intellectual property.

At a press conference today in Richmond, announcing the formation of this new caucus, Delegate Ramadan said

This is also about making sure that we protect our businesses, and be a voice for them to say ‘we’re not just going to let you get beaten up by Washington,’”

We hope more of our legislators will join the Redskin Pride Caucus and show their support for our team and their historic name. 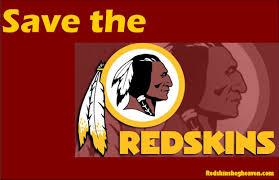 Seriously, shouldn’t they be busy doing the “people’s business”? What a waste of effort.

because this clearly required a lot of time and effort, right??

Still think they should change their name to the ‘Washington Foreskins’ in tribute to all the d*#k heads in Congress.

Bravo. Get the feds off our case.