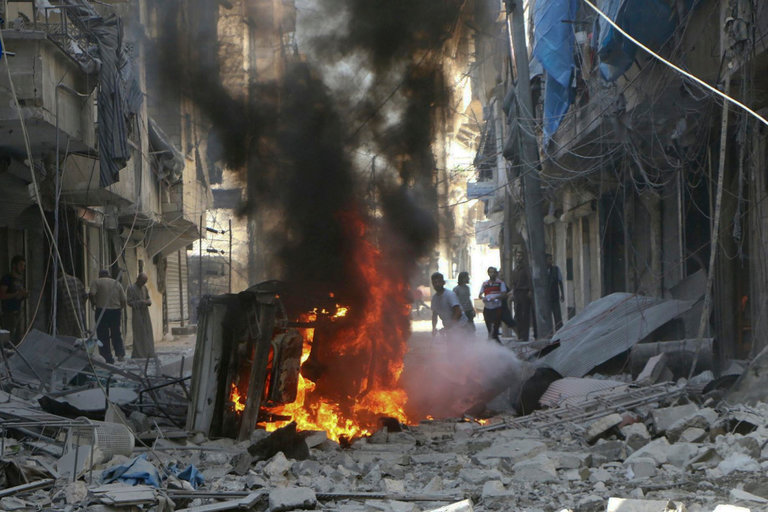 Obama Administration Backs Down to Russia, Yet Again

On Wednesday, Secretary of State John Kerry threatened that if Russian hostilities in Aleppo (a kind of important place to have heard of) continued, that the United States would close all Syrian-related diplomatic channels with the Russians (FOX). The Russians were furious and on Thursday accused the United States of directly supporting terrorism (NYTimes).

Yesterday, Russian war planes and Syrian helicopters ratcheted up their aggression in Aleppo.

Russian warplanes and their Syrian government allies battered rebel-held areas in and around Aleppo on Saturday, and rebels and aid workers accused them of destroying one of the city’s main hospitals and killing at least two patients.Â M10, the city’s main trauma hospital, in eastern Aleppo, was struck as the United States and its allies urged Russia, which is trying to crush resistance to Syrian President Bashar al-Assad, to halt the bombing and reach a diplomatic resolution.Â Saturday’s air strikes focused on major supply lines into rebel-held areas of Aleppo – the Castello Road and Malah district and around the Handarat camp. (Reuters)

The US response was to immediately back down and away from its threats of breaking off diplomatic channels. The United States has developed a long history of making threats it refuses to keep.

Apparently, Secretary Kerry wasÂ furious with the Administration for refusing to use force against the Russians in Syria (NYTimes). Audio of Secretary Kerry was released on Friday where he explained that “you’re looking at three people, four people in the administration who have all argued for use of force, and I lost the argument.”

While the United States makes idle threats, the Russians are winning the SyrianÂ argument and painting a powerful picture of American uselessness in the fight on terror.

Russian officials not only rejected that warning on Thursday, but also angrily denounced Mr. Kerryâ€™s spokesman, John Kirby, for having suggested that Russiaâ€™s prosecution of the Syria conflict would come back to haunt the Kremlin, leading to terrorist attacks on Russian targets and Russian soldiersâ€™ returning home in â€œbody bags.â€

Maj. Gen. Igor Konashenkov, a spokesman for Russiaâ€™s Defense Ministry, said in a statement that Mr. Kirbyâ€™s comments were â€œthe most frank confession by the U.S. side so far that the whole â€˜oppositionâ€™ ostensibly fighting a â€˜civil warâ€™ in Syria is a U.S.-controlled terrorist international,â€ a Soviet-era term for a global organization. (NYTimes)

The Obama Administration’s undisciplined diplomatic posture could beÂ catastrophic if Russia believes that a lame duck American President is likely to remain impotent through the rest of his term. Essentially, we’re advertising to the world that they have four months to do whatever they want, expecting no response from US assets overseas.

I accept the Neo-Conservative premise that a world devoid of US Military presence would be a war-torn world, as tyrants and authoritarians look to expand power over the powerless. However, when we adjoin this premise to other Neo-Conservative premises such as: The US shouldÂ install democracies wherever possible and The US should resist dictators wherever possible; we create the very chaos the first premise is intended to avoid.

President Obama and his Secretaries of State Hillary Clinton and John Kerry have undermined decades of America’s perceived strength. The United States is no longer respected by friend or foe. Â Thanks guys.

[…] Obama administration backs down on Russia yet again […]

Well, barry did tell them to wait until after the election when he could be more flexible. Barry and the Beast along w/McCain gave us ISIS so I don’t know why anyone should be upset. The Russians are doing our job for us.

What exactly are the Russians winning?

No questions. That says it all!

You said it all man.

My favorite is Bibi in his youth as a Soldier. What a stud he was, and still is.