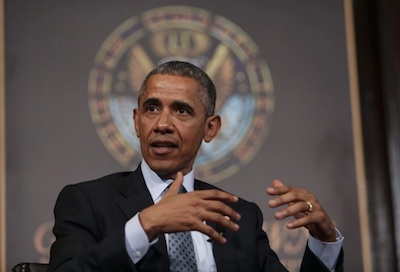 “A poor man with Godly virtue is a rich man indeed. A society that abandons that truth will itself become poor.”[read_more]

President Obama is so shameful and dishonorable – on so many levels – it is hard to be flabbergasted anymore.

The President had a remarkable argument at the Summit, not with those nasty ‘ol conservatives or Fox News whom he continually bellyaches about, but with Jesus. Yep, that’s right – even Jesus had it wrong.

Obama lectured that, “[And] I think it’s important for us to guard against cynicism and not buy the idea that the poor will always be with us and there’s nothing we can do, because there’s a lot we can do. The question is, do we have the political will, the communal will to do something about it.”

He was obviously referencing Jesus from Matthew 26:11, where the Lord chastised the grouching Disciples, “The poor you will always have with you, but you’ll not always have me.”

Obama went on to criticize Christians generally for speaking out against abortion more than poverty. This, of course, is an absurd statement. There is virtually no end to the Christian charities feeding, clothing and caring for the poor (all because the capitalism Obama so detests has created the wealth for them to do so!).

Has there ever been a smaller, more vindictive, ill-informed man in the White House?

Obama’s mostly unintelligible and non-germane ramblings were greeted warmly it appeared, but surely some participants had to be scratching their head and asking themselves, “Isn’t this the guy who has been president for over six years? What has he been doing all this time?”

There is no measure of public wellbeing not decidedly worse now than when the man was elected. There is far more poverty, more food stamp recipients, vastly more unemployment, wildly increased spending, and far worse race relations – than at any time since the next to the worst President, Jimmy Carter.

And why do Christian “leaders” still invite Obama to events – did they miss the memo? He doesn’t like them or respect them. He is very clear about it – he’s a Jerimiah Wright sort of guy after all. Has there been an event that pertained even tangentially to Christians since 2008, where he has not been biting, wrong and ill-informed on the Scriptures, theology, Christian history, or all three at once? One doesn’t come to mind.

It is perhaps unfair to blame this narcissistic, accidental President completely. His bizarre family of ultra-radicals, his formative years between ages six and ten spent in Indonesia, followed by his mentoring by uber-radical communist and early pornographer, Frank Marshall Davis, may have doomed any hope of normalcy.

But this doesn’t excuse the rest of the participants at the Poverty Summit. It was an amazing event even without the President’s ridiculous comments. By now, anyone who doesn’t understand modern day poverty in America isn’t paying much attention. Let’s peek where the pretentious eggheads at Georgetown U failed to go.

First, we have turned poverty into a very expensive racket. Over $22 Trillion dollars has been spent on transfer payments since the Great Society began in 1964; much of it siphoned off to the “poverty industry” that has grown up to run the poverty machine. Its main achievement has been to destroy the family unit. The Great Society was one of the direct causes of the epidemic of fatherless households, with up to 70% out-of-wedlock births in some cities (all run by Democrats). Thus we have a couple of generations of fatherless boys who don’t know how to be men, and fatherless girls who don’t know what a man looks like.

We have stripped manhood of its Godly virtue, diminished motherhood as the most sacred of callings, and removed the family as the center of the society, leaving it to the status of an annoyance to be managed.

We’ve have systematically destroyed what started out as one of the better educational systems in the world over the past four decades, turning urban schools (run by Democrats) into fabulously funded shrines of failure. Barely one half of the inner city children in Baltimore graduate, as one example of many. The more federalized education becomes, the worse it becomes.

Our schools have failed because they have had too much money, not too little; with too many bureaucrats, and not enough math, reading and writing. We’ve scorned technical skills and elevated sex ed. We’ve diminished the best of our culture and history and embraced radicalism in a hundred different ways. We have removed the Ten Commandments from the hallways, but made room for every destructive behavior conceivable.

We have made work an inconvenience and an option, instead of a responsibility – and celebrate victimhood over livelihood. We worship the money from fame, but not the hard work that most often accomplishes it.

We think, epitomized by the President and the looney left, that poverty is about money. It rarely is. It’s about opportunity and effort and a devotion to the best we can be as God gave us the ability, whether that is as a janitor or a CEO, a preacher or a receptionist, a factory worker or a farmer.

A poor man with Godly virtue is a rich man indeed. A society that abandons that truth will itself become poor.

Sadly, the gullible Religious left at Georgetown U and the entrenched political left feed on the nonsense that passes for fighting poverty today; take someone else’s money and give it to the poor until we’re all poor.

We don’t need Poverty Summits built on a mountain of personal vanity, we need a Leadership Summit that reminds us that the Jesus that the President misquotes, was first a suffering Servant then a Sacrifice. His leadership model was about giving, not taking; about the Truth, not self-aggrandizement and the application of power over others for personal gain.

Now that would be a summit worth attending.

Obama Argues with Jesus was last modified: May 15th, 2015 by Michael Giere

Michael, I am honored and blessed to be your ex-neighbor and friend. Your article is well worth reading. As an addendum, it is worth noting that some religious organizations are vigorously sucking at the Federal teat by contracting to “process” the incomers illeagally entering our nation.

I always find politicians that take their application of religious scripture to issues within the political arena form Goggle’s “famous online Bible quotes” as both transparent and pitiful. Obama has always been very confused and ill educated regarding the distinct gulf betweeen context and content but in actuality it is one of his more minor faults in a host based Legion.

Now, this is how a conservative should sound…not like some of the pablum over at Bearing Drift To The Left with their defiantly delusional denial of demographic data.