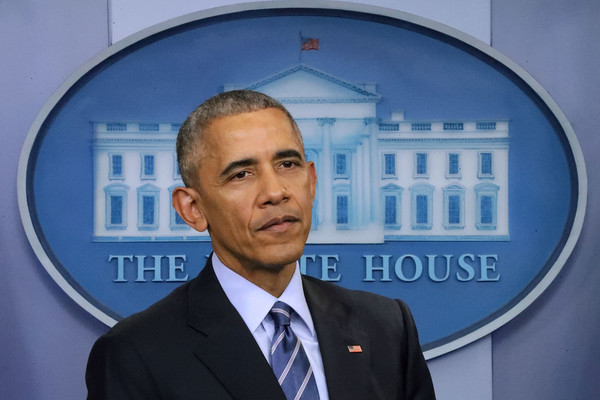 Obama: The Arrogance of Failure

The moving vans are at the White House, wrapping up the last days of the Obama Administration. They will leave behind for posterity the most destructive, divisive and failed presidency of the modern era.

Outside of the fact that he used the personal pronoun “I” more than any other president in history, there is simply not a single positive accomplishment to be cataloged, unless you count what the man broke.

By now the factual recitation of the disaster that is his legacy is as obvious as it is boring. Yet, the President is busy traveling and touting what a success he has been; and this Friday he will give the nation his version of fake news in a nationally televised farewell lecture.

Sorry Mr. President, you are to “success” what an arsonist is to fire prevention.

The economy is marooned in the doldrums. Personal incomes and home ownership have cratered. 95 million Americans of working age are not participating in the workforce and minority unemployment is staggering. Part-time work has become the new normal. Mr. Obama leaves office as the first president in history to have never had above 3% growth in any quarter of his two terms.

More Americans are in poverty, especially children, than ever before. Food stamps and Medicaid use are at all-time highs. Obamacare is imploding, with massive increases in insurance premiums coupled to monstrous deductibles. The nation’s borders are deliberately wide open, and refugees are dropped off in counties across the nation in the dead of night.

It is a mess, and this doesn’t even count the accelerated cultural collapse that Mr. Obama has eagerly advanced.

Overseas, the world is on fire. Abrupt departures from Iraq and Afghanistan have provided what little reason radical Islamists need to start killing people. We’ve had resets and redlines, and all they have accomplished is to inflame the worst actors to be worse. Iran promises to bury us or Israel, or both. North Korea seeks a long-range missile. From Russia, Egypt, and China and beyond, there is hardly a relationship that is not worse than before.

Rarely mentioned by the President are the world’s persecuted Christians, 90,000 of whom were martyrs in 2016, according to a new Italian study. Yet he warns us against Islamophobia at every new murderous event.

There is no question the world is a much more dangerous place. Weakness has consequences.

However, in its failure, the Obama era does present the nation with some excellent lessons for future voters to keep in mind; here are two.

Lesson one: The American experiment in self-government only works when its citizens pay attention to what potential politicians have said and done and demand the media does as well. History matters.

Many of us, this writer included, began reporting about Mr. Obama long before he won the nomination in 2008. Even a casual examination of his two books, speeches, and background (largely ignored by the corporate media) revealed that Barack Obama was an ultra-leftist. Perhaps he could be nothing more.

Born to two radical parents, his father was a self-described Marxist from a Muslim family (he was actually kicked out of the Kenyan government for being too radical). Young Barack spent four years in Indonesia with his step-father, under the predominant influence of Islam. Returning to Hawaii at age 10, Mr. Obama was mentored in his teen years by the well-known communist writer and pornographer, Frank Marshall Davis, whom he mentions frequently in his autobiography as “Frank.”

We actually know next to nothing about Mr. Obama’s college years, travels or finances since the President’s records are sealed and he has spent millions of dollars in legal fees to keep them sealed. But the most illustrative “tells” about the future President’s beliefs are his years in Chicago, spent with radicals and America haters.

He had an extensive and well-documented friendship with the unrepentant domestic terrorists, Bill Ayers and his wife Bernadine Dohrn, among other radicals. Ayers lead a violent faction of the Weather Underground in the 1960’s, “an American Red Army” in his words. Both Ayers and his wife still openly express their “hatred for America,” and Ayers remains influential in the national education policy.

In addition, Mr. Obama spent 20 years sitting in the now infamous Jeremiah A. Wright’s Trinity United Church of Christ in Chicago. Wright is a virulent anti-Semite, self-proclaimed America hater, and proponent of black liberation theology, as well as an apologist for the racist Louis Farrakhan of the Nation of Islam.

Lesson two: Over the course of campaigns, politicians always tell us who they are; their egos demand it.

Mr. Obama told the country who he was and that he intended to “transform” America, meaning replacing traditional American values and norms. He told us he would bankrupt the coal industry, block petroleum production and change how we live where possible. Mr. Obama talked about the “bitter clingers, who hang on to their guns and bibles,” and about the need to reduce the American footprint abroad and the military.

He made a dizzying number of mind-deadening speeches filled with gibberish like “we are who we’ve been waiting for,” and made it clear that he was the cure to what ailed race relations in the country.

All of this is nonsense, of course. Mr. Obama had no intention of uniting – radicals must divide so that they can put the pieces of society back together like they want. Hence, race relations are worse now than any time in recent memory.

Friday’s address will be heavy on self-praise, congratulations and his unchallenged list of accomplishments. In truth, President Obama is the most unaccomplished man to ever hold the office, and has been given an eight-year free pass and never held to account for his failures; while Donald J. Trump hasn’t even been sworn in and is a human piñata for the squishy right and the radical left.  Go figure.