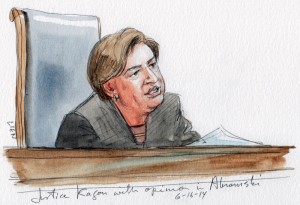 Decided today was an unfortunate case for a Virginia resident and, by pushing the case to the High Court, an unfortunate opportunity for  the Court to bolster their gun control agenda with a liberal majority.

The case involved the 2011 conviction of Bruce James Abramski, Jr., of Rocky Mount, Virginia, a former police officer who was convicted of claiming falsely that he was the buyer of a Glock 19 handgun, when in fact he was buying it for his uncle, Angel Alvarez.  Both were able to purchase and own firearms.

After Alvarez sent Abramski a check for $400, noting on the check it was for a Glock 19, Abramski went to a gun dealer in Collinsville, Virginia, who catered to police officers as customers, giving them a discount. Alvarez simply wanted to benefit from Abramski’s LEO discount, asking Abramski to purchase the gun for him. Abramski filled out the government-required purchase form from the ATF, marking “yes” to a question about whether he was the actual purchaser.  Problem was, he was not the actual purchaser per se and the form he lied upon is very clear in asking,

One would think that perhaps the firearms dealer turned him in or knew Abramski was purchasing the gun for his uncle and passed this information along to the ATF to eliminate any future problems for them.  No, not that simple.

It was actually a cavalcade of wacky events beginning years prior.  Abramski was a cop in Roanoke, fired in 2007.  Thereafter, he went through many tough personal situations and was ultimately investigated for a bank robbery by the FBI in 2009.  This led to his arrest in early 2010 on charges related to the bank robbery.  During a search of his home a receipt was found confirming the recent transfer of a handgun—the one he purchased for his uncle.  While the bank robbery charges were later dropped, that receipt is what led to this whole debacle, including “straw” purchase charges.

For reference, a straw purchase is any purchase wherein a person agrees to acquire a good or service for someone who is unable or unwilling to purchase the good or service himself, and the person transfers the goods/services to the end user after purchasing them.  Straw purchases are legal except in cases where the ultimate receiver of goods or services uses those goods or services in the commission of a crime with the prior knowledge of the straw purchaser, or if the ultimate possessor is not legally able to purchase the goods/services. While Abramski was not necessarily guilty of a straw purchase, he was clearly guilty of making a false statement on the ATF form as there was evidence (the check and statements) that his intent was to purchase a firearm for another person and he, Abramski, was not the actual purchaser.

Noteworthy, had Abramski simply purchased the firearm and later decided to sell that firearm to his uncle, it would have constituted two individual transactions without this mess.

At end, Abramski really had no way to go except an exhaustive challenge of the original search warrant concerning the bank robbery, when the ATF transfer document was found.  This challenge failed in the US District Court, and escalated to the Fourth Circuit on appeal, where it also failed.  Not wanting to go to trial, Abramski ended up pleading to an amended indictment of two firearm charges: (1) making a false statement that was material to the lawfulness of a firearm sale, in violation of 18 U.S.C. §§ 922(a)(6); and (2) making a false statement with respect to information required to be kept in the records of a licensed firearms dealer — that is, that he was the actual buyer of the firearm, when in fact he was buying it for someone else — in contravention of 18 U.S.C. § 924(a)(1)(A).

Abramski had no leg to stand on after his plea deal.  He was convicted and sentenced to several years of probation, collaterally losing his civil rights, including his right to own or possess firearms.

Thereafter, Abramski pursued his case to the Supreme Court.  He sought relief not based on the legality of the search warrants as you might think.  Instead, Abramski’s argument to the high court was that his false response was not material because his uncle could have legally bought a gun for himself.

This was a terribly weak argument and ridiculous question posed for the high court to answer:  “I gave a false response on a government form but the highest court in the land should allow this to be immaterial and reverse my conviction.”  Hint–don’t hire Abramski’s attorney.  Normally, unless various circuits were split on the false response question, they would never even consider such a waste of the Court’s time.  Abramski lied on the form and pleaded guilty.  Knowing this, you have to ask, why would they even pick this one up given that they turn down 99% of the cases presented?   Well, simple, with the addition of Sotomayor, the majority is liberal and pro gun-control.  This was merely an opportunity which provided a platform where they could affirm the lower court’s conviction by simply stating he lied on the form, and address 1) straw purchases, 2) the need and importance of gathering accurate information and tracking gun buyers, and 3) the need for background checks.

READING BETWEEN THE LINES

The underlying position taken by the liberal and anti-gun majority was very predictable. The court stated,

The government has to be able to track gun buyers, and truthful forms about buyers are a key to that.

This is a glimpse into the not-so-distant future where the high court itself condones tracking [all] gun buyers.

Today, the Court also used this platform to touch upon background checks by pulling in the multi-faceted federal program of tracking guns that are used in crimes or guns that wind up in the hands of individuals not allowed to have them — such as convicted felons, the mentally ill, or drug addicts.  “The system of gathering data about the true buyers of guns is essential to a system of background checks designed to keep guns out of the wrong hands,” wrote Justice Elena Kagan for the majority. “No piece of information is more important under federal law than the identity of a gun’s purchaser — the person who acquires a gun as a result of a transaction with a licensed dealer.” Answering a form that asks about the actual purchase, Kagan added, “is fundamental to the lawfulness of a gun sale.”  A sale cannot even occur unless the true buyer is correctly identified, and is at the counter seeking to buy a weapon, the opinion noted.

This ruling is indicative of things to come—the push for national gun tracking, preventing private sale of guns without involvement of a licensed dealer and more frequent and/or widespread background checks.

For reference, the majority opinion was by Kagan and supported in full by Breyer, Ginsburg, Kennedy, and, of course, Sotomayor.

Justice Antonin Scalia wrote for the dissenters, including Chief Justice John G. Roberts, Jr., and Justices Samuel A. Alito, Jr., and Clarence Thomas.  The Scalia opinion argued that the federal background-checking scheme simply does not apply to a gun purchase when both the person at the counter paying for the weapon and the person for whom the gun is being bought are legally eligible to have it.  Outside of anyone knowingly lying on the form, Scalia’s dissent is spot on—if you are not for gun control.

For clarity, the facts of the Abramski case limit the holding to those cases where
the money for a purchase comes from one person who requests that
another person purchase the firearm for them regardless of the reason or
whether the initial purchaser is a prohibited possessor. In other words, if person A gives person B money (or reimbursement) to purchase a gun through an FFL (dealer), then you simply cannot answer Yes, you must answer No.

However, you may continue to purchase a firearm as a gift to someone and as it also states and give example of on P.4 of the form, you would properly answer Yes as the purchaser.

There is a clear difference in the two scenarios.

As for Abramski–I feel his conviction here was simply a replacement because they could not prosecute him for the bank robbery. Likely they felt he did it, but jammed him up on this charge as a parting gift so to speak.

For the Uncle in PA, no, he did not get in any trouble. In fact, he was ready for the transfer of the Glock and had already filled out his Form 4 through his local FFL.

For Abramski being a good or bad guy–there is no opinion, he simply was caught up in a number of situations which ultimately led to the feds nitpicking to gain a charge after having to let him go on the bank robbery.

For Obama and that tie in–I positioned the article in this way because had Obama not been in power to appoint Sotomayor, this type of case (and more to come) would likely not have seen the light of day with the high court. It had no business up there.

Using your own logic, if a Republican President named Ronald Regan had not appointed Justice Kennedy, what would have happened with this case? Well?

Elections have consequences. If President Bush had not destroyed this country, then President Obama would not have been elected. However, Pres. Obama was elected by the majority per the Constitution.

So when the Republican Party stops trying to wipe out the middle-class, maybe they can get elected again.

Does anyone know what happened to the uncle? Did he get in any trouble for being in on the plan?

You got to be kidding? Every attempt was made by the Republican’s to tilt this court to the right.

I support the Constitutional regarding our right to bear arms. But when someone does not follow the rules regarding ownership and purchase, I also support throwing the book at them.

Who appointed Justice Kennedy? Do you even know? Your “guy”, Kennedy actually made the call. To call this Pres. Obama’s SCOTUS is nothing but an outright, right wing lie.

Fill the paperwork out as required, what a joke.

The problem is this- what the former officer did is NOT illegal. Until this ruling, so long as I had no reason to believe that the other person was prohibited, I could purchase a firearm as a gift with no problems. In fact, the 4473 even says that buying it as a gift is legal- from the instructions: You are also the actual tranferee/buyer if you are legitimately purchasing the firearm as a gift for a third party.

I am not a lawyer. Did he fill out the ATF form correctly? Did he plead guilty to not breaking the law?

My understanding of the law is, if you plead guilty, you’re pleading guilty to breaking the law?

In traffic court, if I know I am guilty, in stead of lying, I plead nolo contendo, instead of lying. Then I throw myself at the mercy of the court.

If as the article says, he was fired from his job as a police officer, and at a latter date the FBI was investigating him for something to do with bank robbery, why are you guys trying to turn him into the victim?

Once again, if your article is correct, it appears that you have taken the apparent bad guy, and turned him into a saint, and condemned the Supreme Court and Pres. Obama as the villains?

Can a Republican tell the truth about anything?