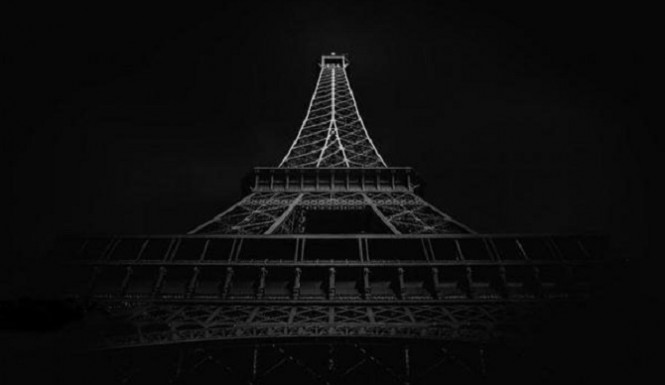 By now we have all heard the terrible news from Paris.  We have seen the pictures of destruction.  We have seen the numbers of fallen civilians.  We continue to mourn the loss of innocent life, and we all now wonder, “what’s next?”

But there are two important points that need to be addressed as to how these acts of terror took place, because a.)  Warnings were raised about these issues before Friday, and b.)  Failing to address them will lead to possible future attacks around the world.

In the aftermath of the coordinated attacks unleashed in Paris on Friday we have learned the identities of at least two of the attackers.  One was Ismael Omar Mostefai, a French citizen who had been flagged by officials for possible ties to radical Islam, and who is believed to have traveled to Syria for several months in 2013-2014.  A second attacker is believed to be Ahmed Almuhamed, who allegedly posed as a refugee from Syria in order to gain entry to France.

The revelations about the identities of these two attackers unfortunately fulfill warnings given over a year ago about the dangers of youth from around the country being recruited via social media to journey to Syria to join ISIS.  It was feared that these youths would receive training by the terrorist organization, and then be sent home to commit acts of terrorism in their home countries.  It also shows the accuracy of warnings given about the danger of ISIS fighters posing as Syrian refugees to infiltrate Europe to commit acts of terrorism.

The possibilities are chilling, to say the least.  Youth from around the globe have traveled to join ISIS, and hundreds of them have now come home, including here in the US.  We also have tens, if not hundreds, of thousands of refugees pouring out of the Middle East, demanding entry to countries all over Europe, as well as the US.  Will we soon see attacks in other countries following the success of the attacks in Paris?  In light of the breadth and coordination of these attacks, one has to ask why a terrorist organization like ISIS, one which Pres. Obama declared had been ‘contained’ just hours before the attacks, could have the audacity to launch such a startling attack on an American ally?

The answer is simple.  They see weakness from the lack of American leadership in the region, and they are emboldened to act.

Pres. Obama’s actions, or inactions as it were, in the Middle East has created instability and chaos.  From the toppling of Mubarak in Egypt and the withdrawal of troops from Iraq and Afghanistan, to the capitulation to Iran on a nuclear deal and the cold shoulder to our best ally in the region, Israel, Obama is sending a very clear signal:

The end result of this has not brought the peace and stability to the region many on the left thought it would.  After all, we have been told for years that it was our presence in the region, our meddling in Middle Eastern affairs, that caused the extremists’ hatred of America.  If we would only leave them alone, the reasoning goes, they would leave us alone.

Unfortunately, the real message that was received by the extremists was that the West no longer cares what happens in the Middle East, and like any bully faced with weakness and indifference, the extremists became emboldened.  So now the Middle East looks like this (ISIS controlled territory in red): 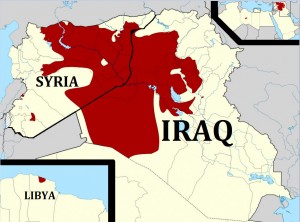 Reasonable people can disagree on whether or not the United States should have gone into Afghanistan and Iraq in the first place.  But we did go, and by doing so we committed ourselves to a course of action that was meant to fight terrorists in their countries, not ours, and to replace a state sponsor of terror in Iraq with a stable democracy that could be seen as an example for all Middle Eastern countries to follow.

There is undeniable evil in this world, and right now that evil is embodied by fanatics who are beheading Christians by the thousands, and are indoctrinating the next generation of mass murderers.  When faced with that kind of evil, you either stand against it, or you watch it grow.

We need real leadership in the White House to stand against this kind of evil.  We are not getting it from Pres. Obama, and we certainly won’t get it from a group of Democrat candidates who can’t even say the words “radical Islam.”

ISIS want to kill all “non believers” and nothing the US does or does not do in its own is going to change that. Blaming Obama for a battle raging for centuries is nuts.

In times like these people look to Obama for consolation, not leadership.

I think what needs to happen is an alliance of Ameirca, France, Russia, and Turkey – an honestly, we should be tertiary at best. We’ve been at this for 14 years and its high time we got some help from countries on the front lines who are at greater immediate risk than we are. France bombing the F out of Raqqa is a start. And as much as we might hate to admit it, we need to pivot away from our alliance with the Saudis are towards Iran if we want to help lead true peace in the Mideast.

Chris – I think you are right. It is better to deal with someone who you know is an enemy than to deal with a phony friend.

A Republican in the White House and saber rattling regarding recommitment of US ground forces back into the middle east is not going to put this genie back into the bottle, that is a neocon fantasy. Who could truly believe that with the current timidity of the serving US Congress, an American electorate that has twice put Barack Obama into the White House in the past decade, a recent Republican surrender on deficit spending and revitalizing the US economy combined with an over extended, under funded, shrinking professional military force just recovering from years of conflict in the region, led by a largely incompetent general officer staff that has been aggressively culled to promote those more concerned with maintaining political correctness and progressive social mandates, then actually leading fighting ground forces is prepared in any manner to directly confront the islamofascists of ISIS, let alone the potential for direct conflict with the Iranian and Syrian states and their Russian military surrogate. That’s what you are facing today on the ground in the Middle East. Do we believably have any allies prepared to assist us in that task today other then a vulnerable and recently much political and media maligned Israel concerned over their own very real threats regarding survival? Does anyone really believe that the so called “moderate” client states we have spent billions of tax payer dollars arming in the Middle East, Egypt, Saudi Arabia, Jordan or the Gulf Emirates would come forward under any mantle of US leadership to actively and militarily appose the current situation without a major on the ground commitment from the US? To be clear I am NOT proposing some form of isolationist withdrawal here but a frank timeout for a strategic reality check. Are we prepared to undertake another incursion into the potential Sunni vs Shiite quagmire that is today’s Middle East? Perhaps a better approach might be to reaffirm our total commitment of the defense of Israel (not Obama’s pretend rhetoric), provide arms, training and air support to those in the Middle East that are willing to fight in their own defense and put “real” political pressure and economic discouragement on those outside agitators like Iran, Russia and Turkey (were Obama is today glad handing Erdogan) that are actively working as agents to further unrest, as well as, actively oppose both abroad and and at home immigration policies that are opening borders to terrorist infiltration. Anyone proposing more had better be accompanying it with the reintroduction of the draft to build the force majeure to proceed down that path, otherwise the only thing being produced is hot air and the possible expenditure of other’s blood.

“Anyone proposing more had better be accompanying it with the reintroduction of the draft to build the force majeure to proceed down that path”
I’ll propose it. The answer to ISIS and radical jihadism is World War III. I’m not kidding. There are 4M jihadis around the globe. We need a WW II-esque coalition to go and kill all 4 million of them wherever they are anywhere in the world.

As usual, your post has weight. I suspect though that if a successful attack occurs here once again, the boots will be back on the ground in Iraq.

Is there any coherence to Obama’s ventures in the Mid East whatsoever?

Above all else, this stupid country and its Cuckservatives and Democraps has got to stop the insanity of open borders and refugee resettlement… with the exception of any Christian left in the Mid East… they are truly asylees…