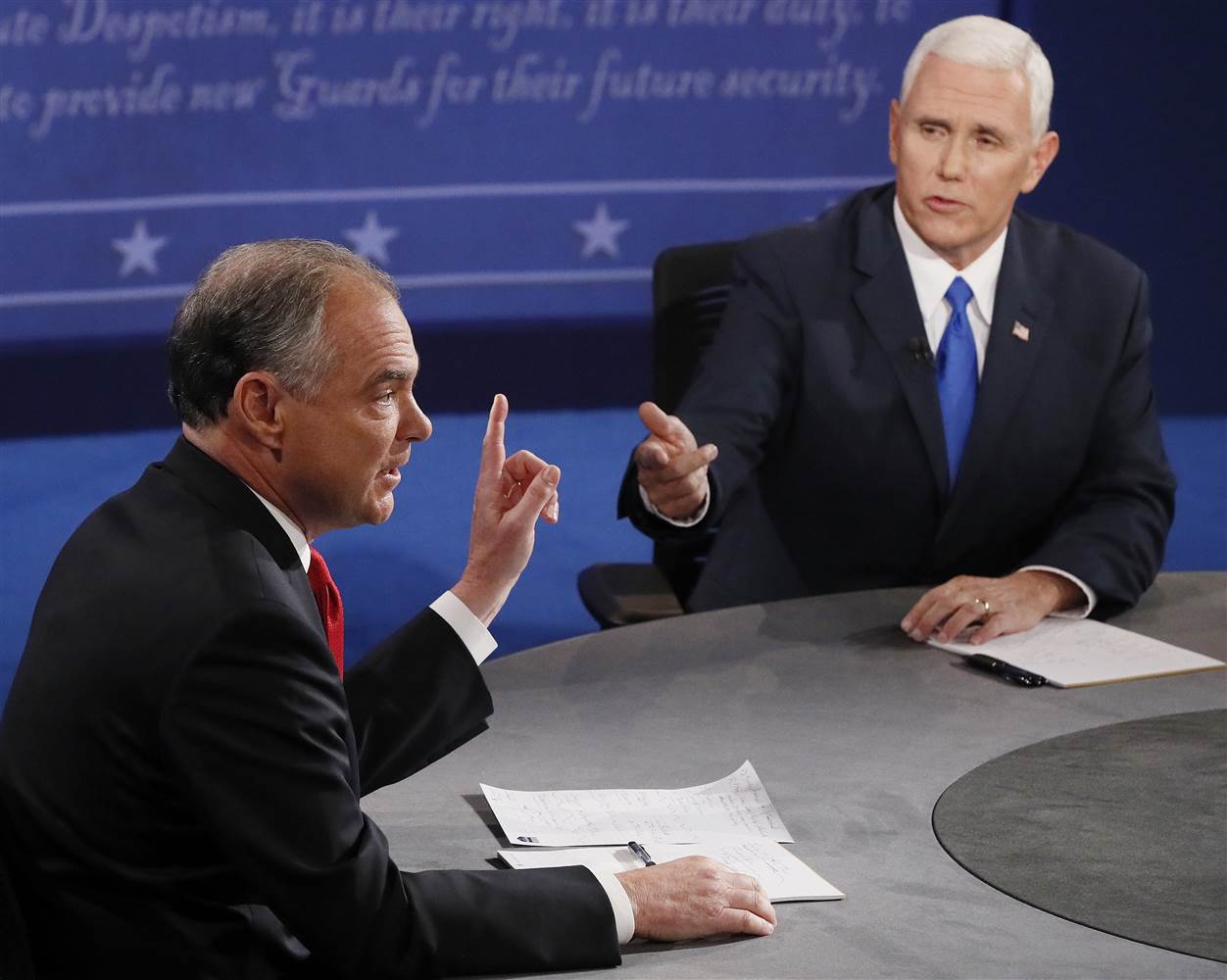 Observations on the VP Debate

During the latter stages of his boxing career, Muhammad Ali would lie on the ropes and let the other guy punch himself out. Â Tim Kaine acted and sounded like the dope as he fell victim to the rope-a-dope strategy. Â Pence, calm and collected, just got stronger as the debate went on and ended on a very high note defending Christianity and the sanctity of life.

You have to wonder how many times the RNC is going to fall into the â€œjournalist as moderatorâ€ trap. Â Since the 2012 election with Candy Crowley, supposedly professional â€œjournalists as moderatorsâ€ have been an increasing bias problem for Republicans – and the VP debate was no exception. Â I expect the next Presidential debate will be more of the same if not worse since there will be two moderators.

Too much in too little time

There were some 9 different topic areas spread over 90 minutes. Â This means that each topic area, no matter how important the question or substantive the answer, only got 10 minutes. Â With the time for the question plus interruptions, there was about 3 to 4 minutes worth of answers. Â Often, just as the debate was getting interesting and informative, the moderator would stop the proceedings and claim it was time to move on.

I found myself disliking Tim Kaine. Â His incessant interruptions and smug demeanor reminded me of a honking goose who seemed to be addressing something of concern to the flock but made no sense at all. Â Â If Tim Kaine was supposed to be an attack dog, he was ineffective because of canned statements and unabashed lies. Â To anyone who was listening, he was the epitome of the elite talking down to the little people.

Mike Pence won the overall argument. Â However, he allowed Kaine too many opportunities to define the supposed distinction between Clinton and Trump. Â Pence eventually figured out how to handle both Kaine and the moderator. Â I give Pence an overall B+ and Kaine a C-. Â The moderator got an F for interference and bias. Â Â

The best part about this was that Tim Kaine was so bad that he not only lost the debate, but he lost his next election too. Most Virginians have likely never heard him speak. Now they have and, when he runs in his next election, people will remember what a jerk he was in the debate in complete contrast to his nice-guy reputation.

The one counterpunch I would have liked Pence to throw was the nuclear weapons question. People have forgotten that under President Clinton both India and Pakistan went nuclear and our Democrat president did absolutely nothing. And when Russia invaded the Crimean, what did our current Democrat president do? Absolutely nothing, despite the fact that the USA signed a treaty with Ukraine that guaranteed the USA would protect Ukraine’s borders if they were ever invaded. At the time we signed the treaty, Ukraine had the 3rd largest nuclear weapons stockpile in the world. They gave up every single nuclear weapon for that guarantee. What a colossal mistake.

Ha! Who is America to guarantee borders when it cannot ‘guarantee’ its own?

And secondly, America once had the Monroe Doctrine which apparently now has been, in a fit of hubris, extended to the far corners of the world. With respect to Russia, Crimea and the Ukraine have for centuries been Russia’s ‘back yard.’ And with equal respect to the afore, it may be exceedingly unwise to bark up the wrong tree too far.

Kaine is one of eleven Senators who rudely walked out on the Israeli Prime Minister’s address to the Joint Session of Congress and is indebted to Islamists who have made major contributions to him even though he has rewarded them with appointments to high government positions. Keeping this motivation in mind for his section to the position by Hillary, one can better understand his positions. He adheres to a “Liberation Theology” very akin to Rev. Jeremiah Wright even thought the leftwing media always refer to it as “Catholic”. He has been admonished by Church Heirarchy for his shifting position onthe Hyde Amendment and now seems to accept federal funding of abortion at Hillary’s insistance.. If she gets elected but only lives a couple of years, his shifting positions are very important to American voters.

Couple of years? Many spells, incantations, and rituals are required to maintain the reanimation for even a few weeks. You can see that the clones are not exact enough and do not share the charm that is Hillary — many more souls are needed, and Bill’s life force is just about sucked dry, much tantricity is needed for just his recharge!

Kaine C-? Pence B+? Really? Got the moderator part correct. Pence was interrupted over 70 times. Maybe you didn’t watch the same debate we saw?

Terry and Tim shaking a leg. What is it w/Democrats and dancing? If you are going to dance in public at least know how.
http://www.weaselzippers.us/299365-that-which-cannot-be-unseen-terry-mcauliffe-and-tim-kaine-dance-after-he-loses-debate/

Pence had the impossible task of defending/explaining a multitude of Trump’s reckless and irresponsible statements. I really felt sorry for him going in. Somehow he managed to just look like the president we need. Another reason to vote for Trump … Gov. Mike Pence.

For some strange reason, a highly successful businessman knows how to pick good people and thus we get Mike Pence. Conversely —- well Kaine makes it obvious what corruption selects.

And the most motivated Trump supporter on the planet? Pete Snyder!

Those boulders don’t need pushing. The selection of Pence tells you everything you need to know to vote Trump.

Not sure what debate you were watching. Pence deserves an A. Kaine an F.

Is there something below an F? I guess “no show” but in today’s PC world, if you show up you get an A for effort. When you combine A for showing up with an F minus for utter stupidity and insulting behavior, maybe that gives a c-.

Easily the worst performance in a VP debate. Ever. Much worse than Quayle. Quayle had that one bad minute. Kaine had ninety bad minutes.

Maybe not the worse, but maybe, not the best to be hoped for.

I gave Pence in the B range. It would have been an A if Pence had aggressively bent back Kaine’s Trump taxes question with all the Clinton crime family corruption from the Arkansas days to the present day, with pay for play, with the specifics of the Clinton Foundation which could have devastated Kaine’s ridiculous defense thereof, and so forth. Fortunately for Pence, more and more people these days seem to see through the Marxist Lefts nonsense.

Most regrettably, Pence let Kaine get away with the typically Marxist stratagem of disruption and destabilization in the constant interruptions of Pence’s speaking time. If Pence cannot call both Kaine and the moderator on the carpet and to responsibility, then this is a very large show of weakness.

Pence as VP should have made it a no-brainier for all the #nevers so y’all gotta ask yourself, just what use are these people in the party? At least the motivations of the GOPeRINO’s are clear and transparent. My conclusion is that just as the party establishment is content with the goodies of second place, the Conservative establishment is content with the safe space of unarticulated ‘principles’ (aka ‘Party only matters when it’s my guy’ — sunshine patriots and summertime soldiers.) and second place… and world peace.

Slowly, ever so slowly, people in America are realizing that total war is being waged upon them by those who rule over them. Slowly people are beginning to realize that there is no cultural, social, political nor economic neutrality in a war of winner takes all. And the more extreme things become (transgender, for example), the more stark is the settling of the reality of this fact.

When the French Revolution turned into total craziness, and terror, the people finally could not take the insanity, and they got Napoleon. When Wiemar got totally crazy and no one could take it anymore, they got Hitler. What will America get, and will it be any better?

But in the present moment, it is Trump or Hillary. We might not know exactly what Trump is, but we know, or should know what Hillary is. And so, the reasonable open ended question should be, “Could Trump be do worse?”

What is this election about? It is about not digging the hole deeper. But also, it is inevitable that forces in motion will move to greater extremes. In all of this, none of us are safe.

Deserves yes, but this is acceptable scoring on strictly the mechanics.