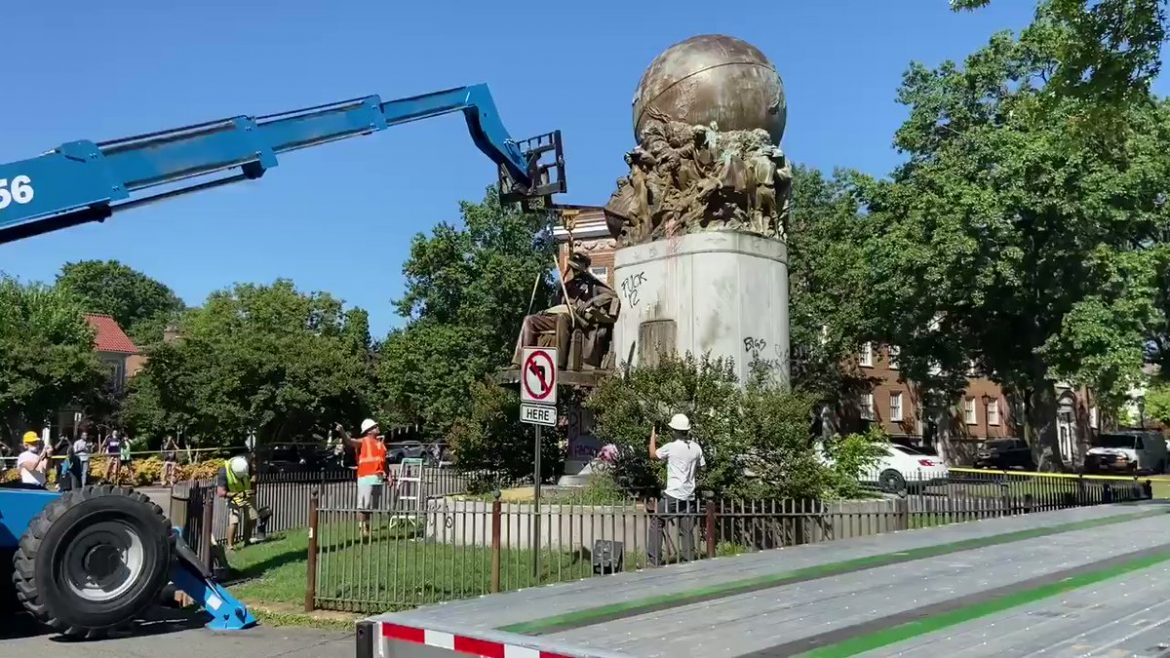 Matthew Maury's statue being removed from Monument Avenue in Richmond

Today we get the attempted cancellation of Matthew Fontaine Maury, one of the world’s greatest oceanographers. Having had his memory preserved on Richmond’s Monument Avenue, and having served the Confederate States Navy, any scientific contributions he made before or after the war are hereby nullified, despite worldwide acclaim. The crane is at his statue as I write.

I was going to write my own summary, but the irony of finding a glowing account of his life on the PBS website was too rich.  For far more detail, there is this on Wikipedia, until they come for that, too.  The Wikipedia article does get into his views on slavery, and his idea to settle parts of the Amazon with American slaveholders and their property. His postwar views, if amended, are not mentioned.

UPDATE: A writer at Virginia Mercury adds this report Maury remained unreconstructed and unrepentant in the immediate aftermath.

Here’s the PBS report on this man who clearly must be erased from memory:

A Naval officer and pioneer in the emerging field of oceanography, Matthew Fontaine Maury was nicknamed the “Pathfinder of the Seas.” Maury gave crucial support to Cyrus Field and the idea of a transatlantic cable by showing Field the route that a cable could take across the ocean.

Circling the Globe
Raised in Tennessee, Maury yearned to follow in his brother’s footsteps and join the Navy. In 1825, at the age of 19, he received a midshipman’s commission with the help of Sam Houston. Maury spent much of the next nine years at sea, participating in three extended voyages including the first circling of the globe by a U.S. Navy vessel. Dissatisfied with current naval books on navigation, Maury set about to improve them, and his A New Theoretical and Practical Treatise on Navigation was published in 1836.

Observer of the Oceans
Badly injured in a stagecoach accident in 1839, Maury could no longer serve at sea, so he was assigned to run first the Navy’s Depot of Charts and Instruments, where he found a repository of ships’ logs from every Navy voyage; and then the newly-formed United States Naval Observatory. Maury would head the Observatory from 1844 to 1861, spending his time charting the winds and currents of the world’s oceans and publishing the first Wind and Current Charts in 1847. As Maury had noted after an earlier voyage, “The calm belts of the sea, like mountains on the land, stand mightily in the way of the voyager. Like mountains on the land, they have their passes and their gaps.” His charts showed mariners where to find those passes and gaps, and Maury was able to plot a course that reduced the time for a sea voyage from New York to San Francisco by 47 days.

The Telegraph Plateau
In 1853 Maury served as the American representative to an international maritime conference in Brussels that developed uniform meteorological standards. That summer the captain of the U.S.S. Dolphin, Lieutenant Otway Henry Berryman, conducted a series of deep-sea soundings from Newfoundland to Ireland. In February 1854 Maury was composing a letter to the Secretary of the Navy with the results of the soundings when he received a communication from Field, asking about the feasibility of a transatlantic cable. Maury sent Field a copy of his letter, which stated in part that the soundings had revealed the existence of a plateau “which seems to have been placed there especially for the purpose of holding the wires of a submarine telegraph, and of keeping them out of harm’s way.” This geological formation, which Maury dubbed the “telegraph plateau,” would prove the ideal route for Field’s cable.

Oceanography and Lecture Tours
Maury published his The Physical Geography of the Sea, the first American oceanography textbook, in 1855. Like other scientists of the time, he turned to lecturing to supplement his income, describing one such 1858 tour in letters home to his wife. Maury estimated he had covered 1,844 miles in 12 November days and made $540; tickets to his lectures sold for 50 cents and he candidly admitted, “Am afraid of empty benches.” Ever the geographer, Maury instructed his children to find his location on a map “and trace me from place to place.”

Confederate Agent
Growing sectional tensions in America began to occupy more and more of Maury’s attention, and while returning from a trip to England in December 1860, he wrote his daughter, “I fear the Union is gone.” When war came, Maury resigned from the Navy and accepted a post with the Confederacy, serving as its agent in London. He lived in England for a number of years after the war, eventually returning to America and serving as professor of meteorology at Virginia Military Institute. Maury died in 1873, having been knighted for his accomplishments by four foreign governments. Four Navy ships would also bear his name.

I’ve always felt a small connection because I lived for more than two years on an idyllic bend in the Maury River outside Lexington, tubing and fishing it regularly. That name will be changed soon, I’m sure. No trace can remain.