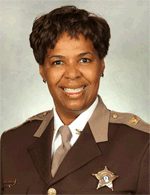 There will be a special election on January 7 in Virginia’s 11th House of Delegates district to fill the seat vacated by Democrat Onzlee Ware, who retired days after his unopposed re-election to care for his ailing mother. Republicans have selected two-term Roanoke City Sheriff Octavia Johnson to run.
Sheriff Johnson has a long and distinguished record of public service in the Roanoke area, and promises to bring her no-nonsense brand of mainstream conservatism to Richmond.

As Salem Republican Delegate Greg Habeeb said in this video,

Obviously the one that everyone’s talking about is Sheriff Octavia Johnson,” Habeeb told WDBJ7. “She has a proven record of winning in the city of Roanoke. She wins in a lot of areas where Republicans otherwise might not get a lot of votes, so we’ll see how the process runs if she ends up being our nominee.

So, we’ve got a really good chance at a pick-up with this seat. Which is a good thing, as the adults in the Democrat party failed to show up at their nomination contest, leaving the nomination to perennial candidate and agitating leftist Sam Rasoul, who won by 44 votes in a fairly evenly split four-way firehouse primary.

Rasoul has previously run for Congress and Roanoke Mayor, garnering 37% and 38% of the vote, respectively. Perhaps his rather unconventional views for this region are at least part of the reason why he hasn’t been able to gain traction, despite apparently wanting to run for anything and everything that opens up. Rasoul apparently is a big advocate of illegal immigrant amnesty, “living wage” laws, expansion of government schools into Pre-Kindergarten years, and ending Republicans’ “relentless attack on Women’s Rights.” That last one will be fun, with Octavia as his opponent. Significantly, Rasoul is also (unsurprisingly) a big cheerleader for Obamacare, and supports immediate expansion of Medicaid in Virginia.

Although the 11th traditionally leans Democrat, with a candidate like this lightweight, out-of-step Rasoul, Octavia Johnson has a real chance. If you have the opportunity, visit her website and make a contribution. There’s not much time left, and we all have an interest in her success. Do it now.