The fundamentals, and the candidates, suggest that this Senate campaign is about to get close, and that Ed Gillespie is going to rapidly turn this race into a turnout contest.[read_more]

For months we’ve been reading about polls showing Mark Warner with more than a 20 point lead on Ed Gillespie. This is unsurprising, and as much as Democrats and other naysayers want to believe otherwise, it was a reflection neither on the strength of Mark Warner as a candidate nor on any weakness on Gillespie’s part. It has simply been a matter of focus and name ID.

We know this because these same polls suggest hardly anyone knew who Ed Gillespie was. Unlike readers of The Bull Elephant (who are, of course, the most intelligent residents of the Commonwealth), the vast majority of people have never followed politics closely enough to have any idea who Ed is, nor what his former roles have been. (Did I mention that our readers are also the best looking Virginians?) 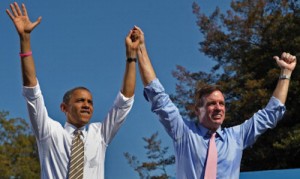 The President and his Virginia Handmaiden

The Roanoke College poll in July had Warner +25 over Gillespie. But, at that time, fully 75% of poll respondents didn’t know enough about him to form an opinion. By contrast, in the most recent poll from Quinnipiac that shows the race narrowing to single digits (Warner +9), only 37% of respondents said they didn’t know enough about Gillespie. And 37% is still a WHOLE LOT of people left to reach; the same poll shows that only 11% of people don’t know anything about Mark Warner.

And therein lies Gillespie’s opportunity, and Warner’s shield. Whichever candidate can define Gillespie to that roughly 1/3rd of the electorate that hasn’t tuned it yet will determine how the race turns out.

Gillespie’s efforts have clearly been closing the gap, but until just now those efforts haven’t even included airtime in the vote-rich and very expensive Northern Virginia media market (no doubt the cause of some NoVa residents describing this race as “sleepy” or “lackluster”). His strategy has been working, and Ed is just now ready to sprint to the finish line.

So what do I mean when I suggest the “fundamentals” of this race weigh in Ed’s favor? Kind of the same thing I meant last year, when I said that despite all of the money and negativity directed toward the GOP ticket, and despite really bad poll numbers, the fundamentals tilted in Cuccinelli’s direction. Those fundamentals didn’t quite overcome the transient negatives, but Ken kept it a lot closer than almost anyone predicted.

This year, we’re in a similar situation, but are seeing NOWHERE NEAR the obstacles we nearly overcame last year. Ed Gillespie and company took full account of what Ken Cuccinelli did in the last few weeks of last year’s campaign, when he nearly came from way behind to win: he hung Obamacare around the Democrats’ necks like a boat anchor.

Fundamentally, Virginians (especially those voting in non-Presidential years) have a profound distaste for the president’s healthcare disaster. As more people begin to understand Mark Warner’s personal culpability in that, not only will that 37% number start to shrink, but most of those folks are going to break Gillespie’s way–just like we’re seeing in other races around the country.

It is advertisements like this that are going to make that happen in Virginia:

Nationally, Democrats aren’t as energized this year as they have been, and even less so in Virginia with the under-the-radar, sprint-to-the-finish race Gillespie has run, which has some folks lulled into a sense that the campaign is already over.

But here’s the October surprise: the campaign is just now getting started, at a time when Mark Warner is going to be too tangled up in Obamacare, with poll numbers below 50% and an unenergized base, to be able to beat back the national wave Ed Gillespie is about to surf.

Will it be enough for Ed to win? Maybe. But it is certainly enough to get this Republican excited about the prospect.